The World Robotics report presented by the International Federation of Robotics (IFR) shows a new record stock of about 300,000 operational industrial robots in the Republic of Korea in 2018 (+10%). 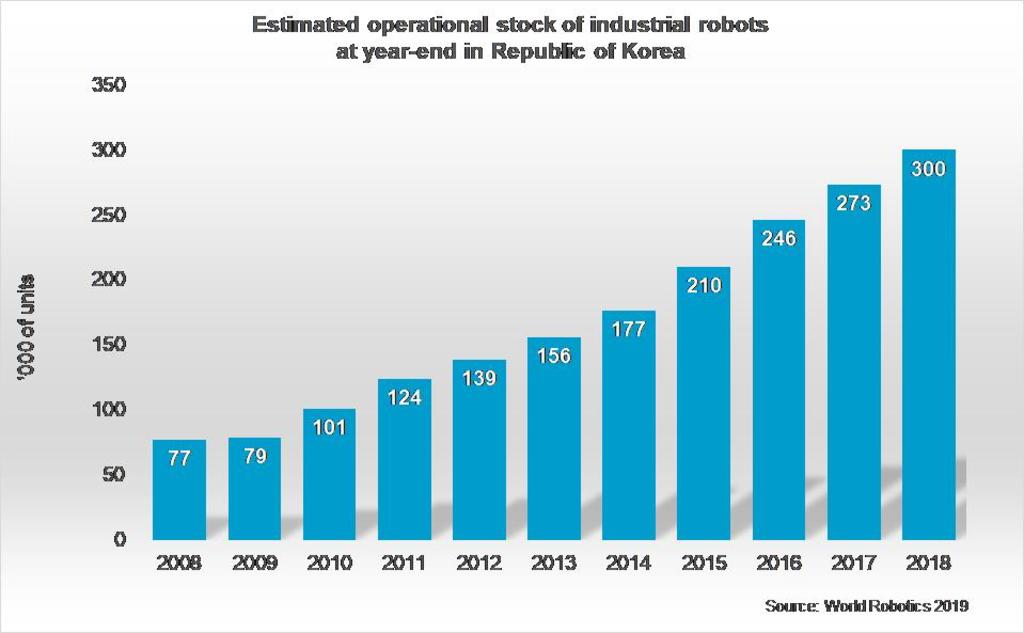 Within five years, the country has doubled its number of industrial robots. Following Japan and China, the country ranked third in 2018. But the dynamics of robot installations has decreased in recent years and for 2019 a continued decrease is expected.

“Robot installations declined by 5% to 37,807 units in 2018,” says Junji Tsuda, President of the International Federation of Robotics. “Both, the electrical/electronics industry and the automotive industry reduced installations – together they account for 82% of total demand.”

South Korea is affected by the US-China trade dispute, but there could be positive as well as negative effects: China is an important export destination for Korea´s intermediate products. The conflict could result in decreasing demand from China. In contrast, Korean products might substitute Chinese products. But currently, the South Korean economy is in troubled waters. Declining demand for electronic products and announcements of investment reductions by major electronics companies point towards another year of decreasing robot installations.

In the long run, the extensive use of robots is vital in order to maintain competitiveness. Korea’s population is ageing rapidly. By the middle of this century, it will have one of the oldest populations out of all OECD countries, just behind Japan, Italy and Greece. In 2050, more than one third of the population will be over the age of 65 and around half of all workers will be aged 50 and over. This helps to explain why South Korea has already embraced robots, particularly in its manufacturing sector, where “robot density” ranks second place in the world - following Singapore. With 774 industrial robots per 10,000 employees, the Republic of Korea has more than twice the number of Germany (3rd with 338 units) and Japan (4th with 327 units).

The Workforce Development and Training Act, updated in 2019, is one important initiative in a series of government- driven programs. People get support to develop skills of how to handle robots and automated machines. The "Smart Manufacturing Innovation Strategy" announced the build-up of 50,000 smart factory workers by 2022. And the Third Robot Basic Plan with a runtime of 5 years will support training of 2,200 workers for small and medium-sized enterprises by 2023.