With a broad-based investment program, leader in gripping systems and clamping technology, SCHUNK, is preparing for the next step of its global growth: around 85 million euros will be invested in the locations Brackenheim-Hausen, Mengen, St. Georgen and Morrisville USA by mid-2020. 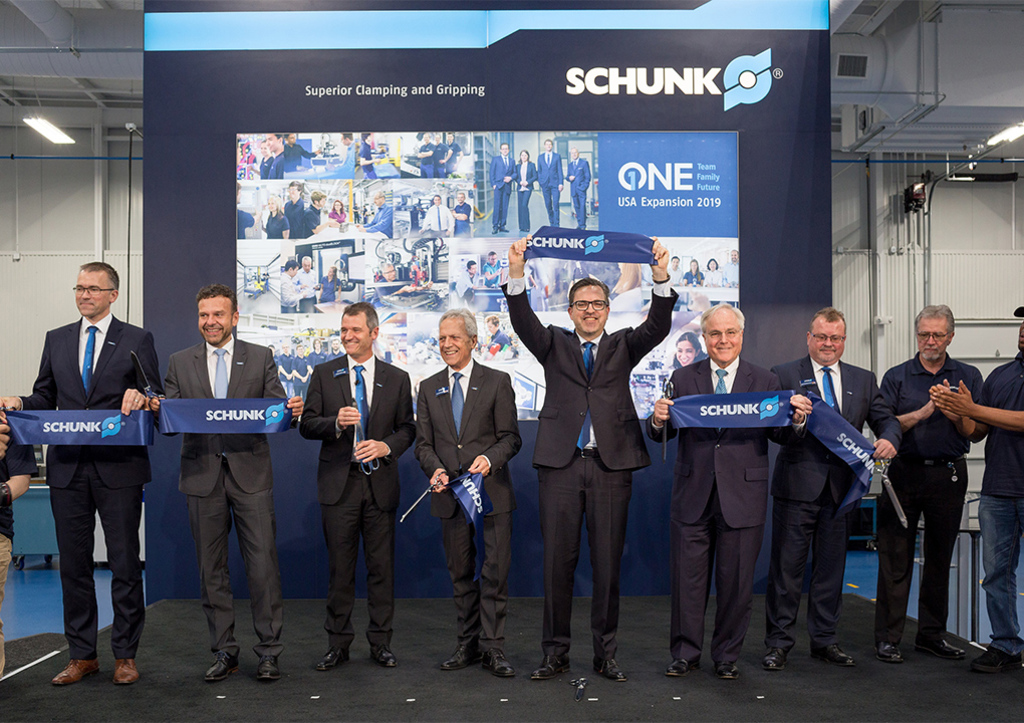 The investment programme will create around 42,000 square meters of additional production and administration space, starting with the US plant in the state of North Carolina, where the new buildings were officially handed over recently.

In addition to the expansion of the production area, SCHUNK Intec USA created a generous new administrative building that, through its open architecture, encourages and inspires creativity and lateral thinking. In the newly-created Customer Center, users can experience SCHUNK's components live and receive additional know-how in technology forums and workshops. Under the motto "One Team - One Family - One Future", the approximately 4,000 square meter new building expansion was inaugurated in early May with an official ceremony followed by a Family Day. Alongside Managing Partner Heinz-Dieter Schunk and Chief Executive Officer Henrik A. Schunk, the President of SCHUNK Intec USA, Milton Guerry was enthusiastic about the opportunities that the investment offers for the future.

Anthony Copeland, Minister of Economic Affairs of North Carolina, praised SCHUNK as a great example of a company that creates jobs and highlights the assets of North Carolina as a business location. The largest subsidiary of SCHUNK was founded in 1992 to ensure proximity to American customers and to the subsidiaries of German corporations. This strategy is a complete success: On-site production ensures short delivery times and high flexibility, especially when it comes to specific components that are produced specifically for the American market. Today, the USA site plays a leading role within the group of companies for the entire North and South American market. SCHUNK has invested a total of almost 10 million euros in the expansion of the site.

In addition, 40 million euros are being put into the Competence Center for Gripping Systems in Brackenheim-Hausen, just five kilometers from the headquarters in Lauffen. The expansion covers an area of 22,000 square meters and represents a doubling of the existing production area.

SCHUNK is investing another 30 million euros in the Competence Center for Lathe Chuck Technology and Stationary Workholding in Mengen, in the district of Sigmaringen. Here, 12,000 square meters are to be added for production, research, and development.

Five million euros were invested at the St. Georgen site in the Black Forest, where the production area was doubled with an increase of 4,200 square meters. The Chief Executive Officer Henrik A. Schunk, sees the total volume of 85 million euros as a consistent investment in the future of the company: "In the coming years, we will experience a boom in automation and digitization worldwide, and we'll only be able to handle this by having the right capacities", says the CEO. For several years, SCHUNK has been successfully focusing on these two trends and concentrating its resources and know-how. Henrik Schunk expects high growth rates, especially for mechatronic and increasingly intelligent clamping devices and gripping systems.