Rugby MP, Mark Pawsey, has praised FANUC for bringing the manufacturing industry together and hopes that it will help change the perception attached to automation in the UK, after attending the company’s inaugural UK Open House event on Thursday 31 October. 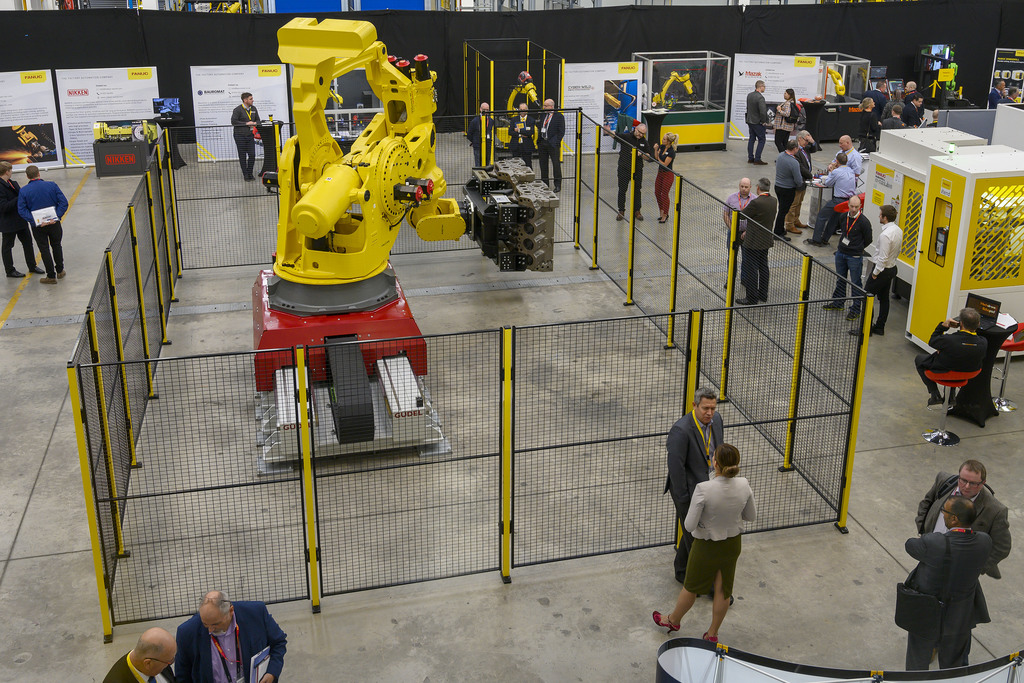 Hosted at Fanuc’s UK headquarters in Ansty Park, Coventry, Mr Pawsey, who is also a member of the Business, Energy and Industrial Strategy (BEIS) Committee, was speaking on the final day of the event, which brought UK industry together to discuss the challenges of adopting automation in the UK. Discussing the BEIS Committee’s recent report, Automation and the future of work, Mr Pawsey highlighted some of its key findings and recommendations to UK Government, including the need for progress and to remove the slow uptake of automated systems.

The report, which was published in September highlighted the UK’s slow adoption of automation, and explained how it is being hampered by a lack of action from the Government. Stating that there are entire regions of the country at risk of being left behind G7 competitors, the report from the BEIS Committee argued that, unless concerted efforts are made to manage the transition to the Fourth Industrial Revolution, UK businesses will miss a pivotal opportunity for economic growth.

Speaking at the event, Mark Pawsey said: “This event is bringing together, not only customers, but people from around the industry. I’m hoping the coverage of this event will play its part in changing people’s perceptions about the opportunity that robots will provide.”

Mr Pawsey’s appearance came at Fanuc’s first UK Open House, which saw over 600 manufacturing professionals attend over the course of the three-day event. Organised to promote automation and the opportunities that lie ahead for UK manufacturing, the event also covered topics including the necessity for smart manufacturing and the Internet of Things.

Fanuc's UK Managing Director, Tom Bouchier, who also provided evidence to the BEIS Committee ahead of its report, said: “This is the first time we have hosted this event and opened our doors to such in-depth industry discussion. Over the last three days, we have received fantastic engagement from industry peers and also debated the future of our industry.

“We have discovered that there are a number of avoidable barriers preventing the UK’s adoption to automation, and it was great to hear from MP Mark Pawsey on the challenges that the BEIS Committee has submitted to UK Government. It is important that attitudes change and we hope that our three-day event has helped open people to new ideas and ways of working. Automation provides the UK with significant opportunities, not only on the potential economic impact, but also the productivity of UK manufacturers. However, we need to act now and ensure that the current scepticism surrounding automation in the UK is addressed.”

The three-day event also highlighted the concerns around support for the UK’s academia and universities, as well as how to overcome the skills shortage. Tom Bouchier concludes: “Perhaps the biggest challenges facing UK manufacturing surrounds education. Ensuring that school and university curriculums are exposing people to new technologies from a young age, as well as providing a clear route for anyone interested in studying the subject, is essential.

“We have also heard the different challenges facing SMEs across the UK, which was also discussed in the BEIS Committee’s recent report. The report calls for funding of an impartial source of advice for businesses looking to invest in automation, and the discussions we have seen at our event appear to back this idea up.

“We hope that our event has not only provided a platform to continue this important discussion, but also paves the way for the UK to adopt automation across all manufacturing sectors.”