An ongoing project to reconstruct EDSAC – one of the world’s first computers, which was built at Cambridge in the late 1940s – has been given a boost by the discovery of a very rare original part. 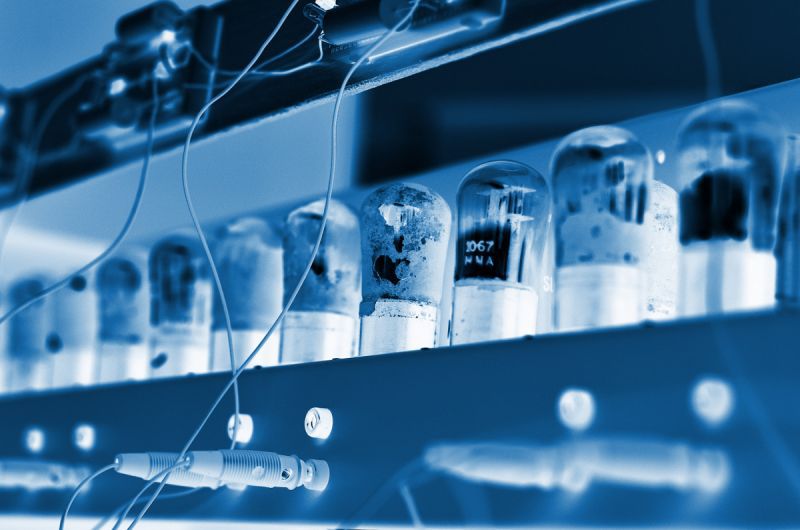 The part, a chassis (1A) designed to hold 28 of the 3000 EDSAC valves, has just been donated to the EDSAC team at The National Museum of Computing (TNMOC), where the ongoing reconstruction of EDSAC, originally built in Cambridge in the late 1940s, is on display. The reconstruction is expected to be completed later this year and is already a very popular exhibit especially amongst the many educational groups that visit the Museum.

The EDSAC Chassis part is said to have been acquired at some sort of auction of EDSAC parts in Cambridge in the 1950s when the computer was decommissioned.

Andrew Herbert, leader of the EDSAC reconstruction project at TNMOC, said: "Details of the ‘auction’ are unclear, but there is a possibility that other parts of the original EDSAC still exist and could even be in the Cambridge area stored away in lofts, garden sheds and garages. We would very much like to hear from anyone who thinks they may have other parts.”

The Chassis 1A has been donated by Robert Little, from Allentown, Pennsylvania, USA, after he read about the EDSAC reconstruction project at TNMOC. He had obtained the part in 1969 from Dr Robert E Clark, who at that time lived in Collier Road, Cambridge. Earlier Dr Clark had bought three or four EDSAC racks with the intention of converting them into bookshelves. The other chassis were later discarded, although some may have been given to colleagues.

Robert Little said: "I regret that the probability of finding any more of Dr Clark's EDSAC parts is vanishingly small. Dr Clark passed away in 1984. Sometime between 1969 and 1984 he relocated to a house on the outskirts of Cambridge and quite probably disposed of unneeded things then.

"The bulk of the machine was most likely destroyed. I have a vague recollection of Dr Clark describing how he was bidding against the local scrap metal dealer when he won the EDSAC parts at auction. Despite this, I am hopeful that those who built and worked with EDSAC kept other mementos that have been preserved intact until now."

Andrew Herbert continued: "Chassis 1A is quite distressed with corrosion and much of the wiring has broken away from tag strips. It would be a major task to return this particular chassis to operating condition. However, we hope to try to use some of the valves, if they are still functional, in our reconstructed EDSAC thus providing a very tangible connection with the original machine.

"We would very much like to know if more of these chassis have survived. We think that as many as 42 of this type existed in the original machine. When EDSAC was decommissioned, only three chassis were thought to be in existence – one in the Cambridge University Computer Laboratory (since loaned to The National Museum of Computing), one in the London Science Museum and one in the Computer History Museum in Silicon Valley. This is the first time any of our Project Team has heard of the auction and it's tantalising to think that more parts of the original EDSAC might be out there – somewhere! It is also exciting to think that we may have stumbled across the first computer auction!"

The chassis were a vital component of EDSAC. Built in modular fashion, EDSAC had 12 vertical racks which could hold up to 14 individual horizontal chassis. Each chassis provided all or part of one of EDSAC’s logically distinct functional units. There were about 70 different types of chassis. Some were represented only once while others were replicated. Chassis type 1A is a Storage Regeneration Unit that keeps data recirculating through a short or long tank. There were 42 identical Store Regeneration Units.

The chassis variants look quite similar: they all have two long rows of 14 holes each, for valve-holders, allowing each chassis to hold up to 28 valves. Given that it takes three pentode and two diode valves to build an "AND" gate, each EDSAC chassis is therefore barely equivalent to even the simplest of modern integrated circuits.

Chassis 1A is the latest surprising original find for the EDSAC Project Team. Last year, some early EDSAC diagrams resurfaced after decades in storage.

The EDSAC display, recently opened at The National Museum of Computing, enables visitors to see progress of the ongoing reconstruction of one of the most influential early computers.