Modern bearings rarely fail as a result of fatigue, but when they do, they often show signs of a phenomenon referred to as white etching cracks (WECs). SKF's Phil Burge describes WECs, their causes, consequences and how, by their identification in each case, premature bearing failures might be avoided 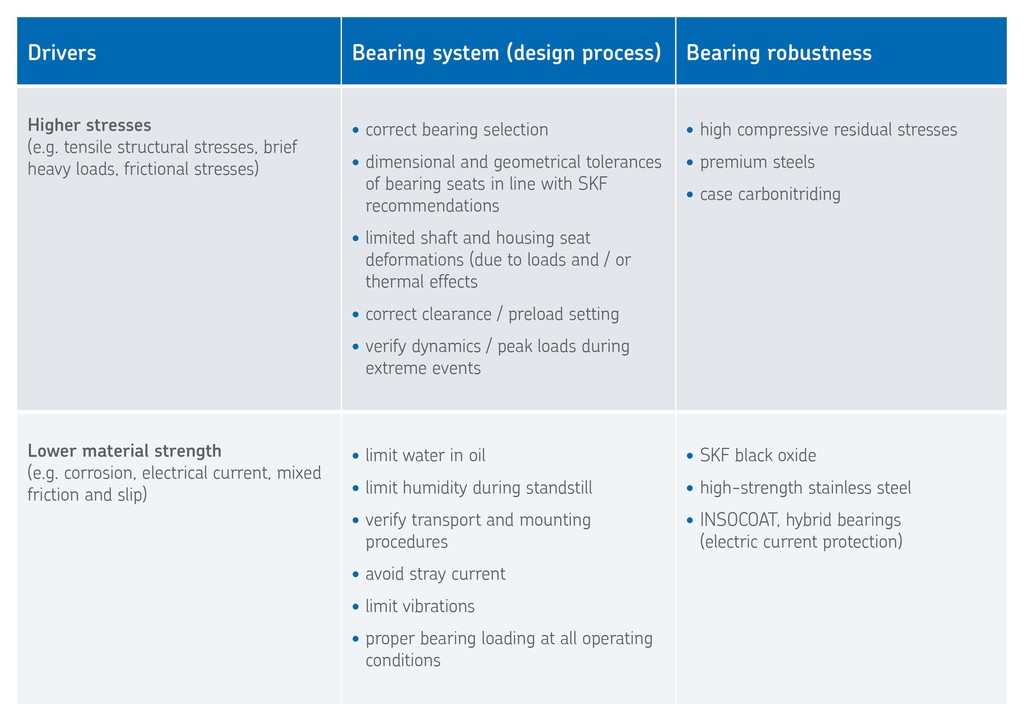 Bearing failure due to rolling contact fatigue is rare, but when it does happen, the bearing usually fails early on in its calculated rating life and, on inspection, often reveals signs of an extensive subsurface crack network within the microstructure of bearing steel known as white etching cracks (WECs). Affected areas consist of ultra-fine, nano-crystalline, carbide-free ferrite, or ferrite with a very fine distribution of carbide particles that appear white when viewed under a microscope. Over time, WECs will propagate towards the bearing surfaces, typically causing spalling of the raceway.

Considered a symptom, rather than the root cause, of fatigue failure, WECs occur due to a number of factors, principal among which is rolling contact fatigue (RCF). Small, heavily loaded, long-running bearings can go through several stages of fatigue before failure, starting with the shake-down stage, then microplastic deformation, work hardening and, eventually, an accumulation of residual stress. Larger bearings, on the other hand, tend to fail due to breakage of the weakest link - bearing steel inclusions and porosities being prime examples.

Another cause of WECs is accelerated fatigue (premature spalling) resulting from higher stress and lower material strength. Bearings are subject to higher stresses as a result of transient high loadings or temperature effects. Examples include structural stress in the bulk material of the bearing caused by factors such as misalignment, and increased stress on the raceways due to tribological factors, including reduced lubricant film thicknesses.

The material strength of a bearing may also be negatively influenced by environmental factors that are suspected to generate hydrogen, including water contamination, corrosion and electrical stray currents. In these cases, even moderate loading conditions can lead to premature bearing failure.

White etching is a universal phenomenon, found in all types of industry

White etching is a universal phenomenon, found in all types of industry, all types of bearing and all types of heat treatment. WECs occur at the end of the failure chain and are a natural consequence of crack networks in prematurely failed bearings. The key to identifying the root causes for premature bearing failure is not only to study WECs, but rather to discover the relevant weakening effects (the higher stresses or lower material strength mentioned above) that lead to accelerated fatigue.

Generally speaking, failure of any mechanical component is due to breakage of the weakest link and premature failure is a result of signiﬁcant weakening of the weakest link. Rolling bearings are no exception and their reliability is underpinned by this weakest link principle, as weak spots always exist inside the material or on the working contact surfaces.

When lubrication conditions are poor or the contact surfaces are roughened due to particle indentations, the weakest link could well be on the surface and the bearing fails due to surface damage such as surface distress or wear. Under good lubrication conditions, the weakest link could be in the sub-surface, owing to the presence of material defects such as inclusions.

It is the weakening, due to higher stresses or due to reduced material strength, that causes early crack initiation and accelerated crack propagation that leads to premature bearing failure - but not WECs. When there is no weakening, a bearing may fail as a result of normal rolling contact fatigue by a single spall showing little or no WEC occurrence, because cracks propagate quickly when the material reaches the end of its life.

Each premature bearing failure is unique and the reasons for premature spalling can be very different. A single root cause does not exist, and each failure case needs to be reviewed in the light of the corresponding operating conditions. Higher stress or lower material strength have been identified as principal weakening drivers and within these broad categories, general recommendations can help to identify a likely cause of premature failure. However, for a truly accurate diagnosis, this general advice should be underpinned with a deep knowledge of bearing failure – or by seeking help from an acknowledged expert.