AN ALDERSHOT-based professional photographer and visual engineer is using an industrial robot fitted with a camera to produce perfect studio pictures. The equipment is mounted onto a bespoke mobile pedestal made with standard aluminium sections and which features modular components supplied by FATH. 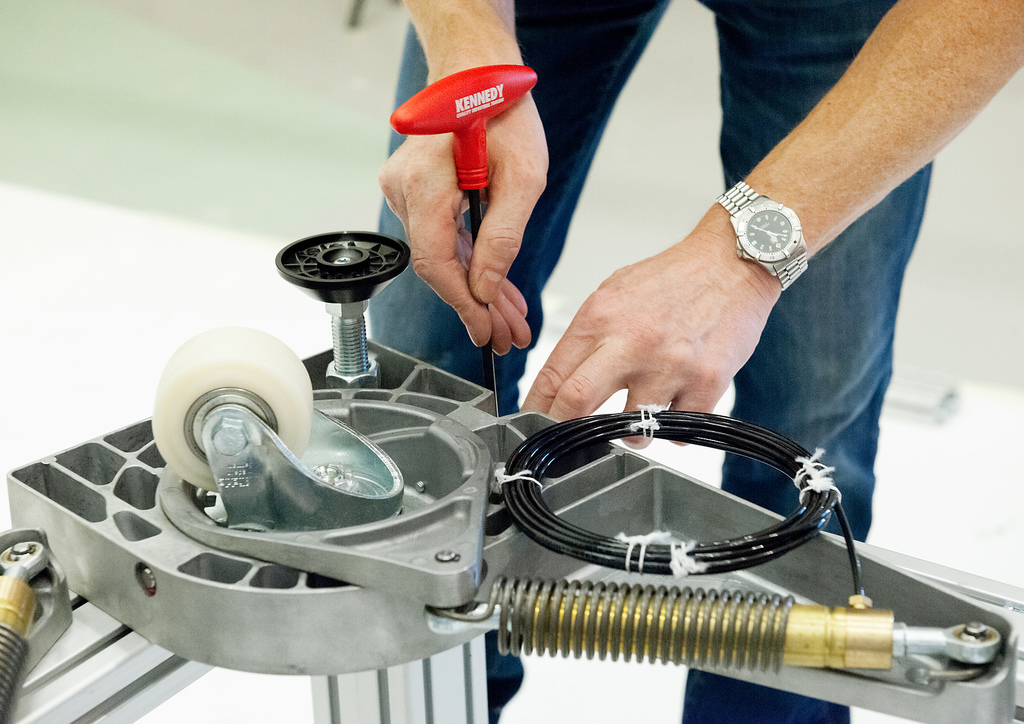 When leading photographer Jason Butcher had the idea of using a high speed robotic arm to achieve repeatable motion controlled camera moves, he knew exactly where to go for some advice on how to make the project work:  to the business based next door. FATH Components is a well known supplier of machine elements to industry and is conveniently based in the adjacent unit to the studio.

Butcher’s photography company specialises in premium-quality imagery for many sectors and also provides motion pictures for the film industry. His original idea was to mount an industrial robot onto a steel platform, which would allow both stills and motion imagery to benefit from 6-axis movement of a camera or the product - or even the lighting used to illuminate the scene. The advantage wasn’t just a creative one: computer-controlled motion planning and accurate frame repeatability are at the core of emerging technologies that provide new shooting and viewing experiences.

Having discussed the project with its neighbour, FATH suggested making the robot pedestal from standard aluminium sections rather than the steel originally envisaged. Their view was that the structural strength in an aluminium section version would be more than sufficient, even with a weighty robot mounted onto it. With Butcher’s basic design parameters agreed, and expert input from FATH, it took just a few weeks to deliver a working pedestal upon which the robot was then mounted ready for initial trials.

The pedestal was made using industry standard aluminium sections together with FATH connection angles and T-slot nuts. The unit also features a FATH Lift Castor set which includes not just the castors themselves but the levelling feet as well. Despite the weight of the complete unit at around 1.25 tonnes, the entire robotic shooting cell can be moved quickly and easily around the studio by one person, and is kept in an ‘always ready’ state for instant use 24/7. The smooth running FATH Lift Castors permit easy single-handed positioning on the studio floor and the unit is both locked into position and stabilised by the simple expedient of winding down the FATH levelling feet once the module is in position.

Butcher observes: “Our aluminium-framed pedestal was built weld free, in less time than the original idea. The nature of the aluminium profile allows for future reconfiguration too. It has provided us with a safe, rigid and easily moveable unit which comfortably accommodates the camera-carrying robot mounted to it: a single person can position the unit easily."

Trials revealed that due to the mounting plate and counter weights stored securely inside the frame, the base needed no additional stabilising even when the robot arm and camera were at maximum reach.

FATH Components and Jason Butcher have produced two short, one minute videos of the project, a time-lapse showing the build of the plinth and the other showing the robot mounted camera in action, photographing a banjo from multiple angles.

Commenting on the new unit, which may be a UK-first in a photographic studio, FATH UK managing director David Hayes says: “The turnround time to build and deliver this special plinth illustrates the advantages of having both the technical expertise and a UK stock of machine building elements here in Aldershot. We are pleased with the outcome and glad to have been part of the bigger picture."