Home >On the road to success
ARTICLE

On the road to success

When it comes to the use of the latest technology, the automotive sector has always been at the forefront of adoption and innovation. Charlotte Stonestreet highlights some of the latest developments, from the use of cobots to augmented reality 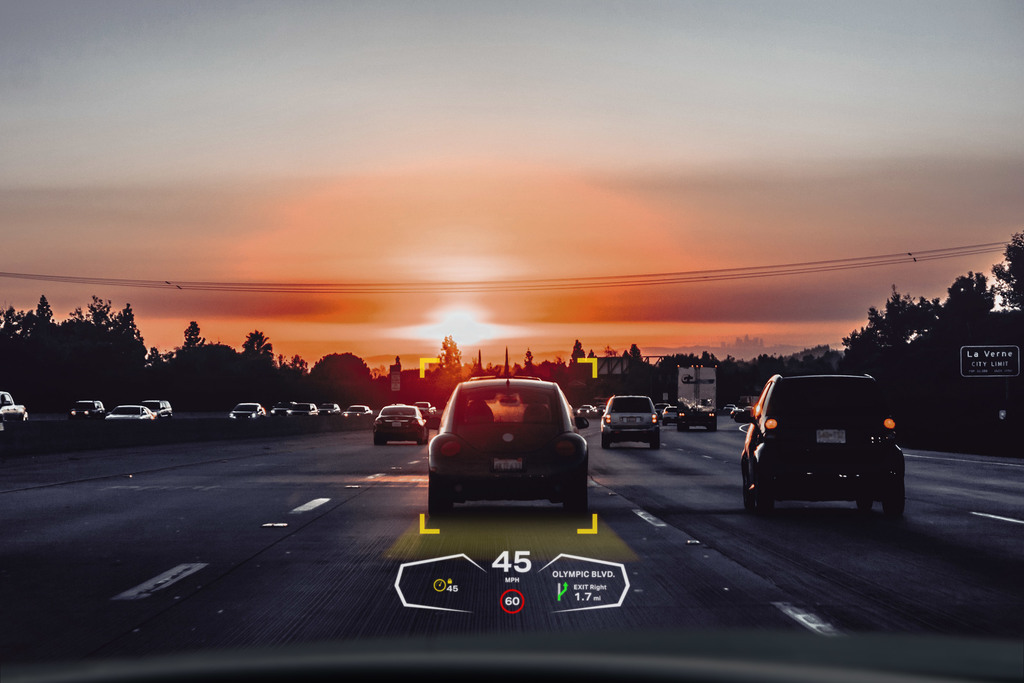 A recent report from Global Market Insights finds that the Automotive Robotics Market size crossed USD 4 billion in 2016 and is poised to grow by over 3.8% between 2017 and 2024, with global sector demand surpassing 210,000 units by 2024.

Manufacturers are adopting the technology for several reasons such as capacity, safety, and quality. It helps in minimising the waste caused by human errors leading to the lesser variability in vehicle assembly. Auto makers are striving to maintain consistent time and control processes in each stage of the assembly line.

For the workforce, many vehicle manufacturing processes include insidious tasks which can eventually lead to musculoskeletal disorders resulting from twisting, lifting, and repetitive movements - an issue that can be eased by implying robots. Further human risk factors from exposure to welding and paint fumes can also be mitigated with robot use, which will augment the global automotive robotics market share.

The report does however identify that high installation costs will hamper the overall market revenue, while uncertainty related to stored data from the product will restrict the industry as information contained in databases can lead to unlawful access or misuse. Moreover, rising unemployment due to automation will act as a restraint to the industry size.

It’s not just the automotive manufacturers themselves that are increasingly implementing automation, but the whole supply chain. In one example, BWI Group, a full service supplier of chassis, suspension and brake products, is benefiting from a Universal Robots UR10 collaborative robot which is employed tending a blow-moulding machine, where completed parts are extracted every 25 seconds and placed in containers ready for shipping, saving on the need – and cost – of having a human operative in attendance. The UR10 has been supplied by RARUK Automation. 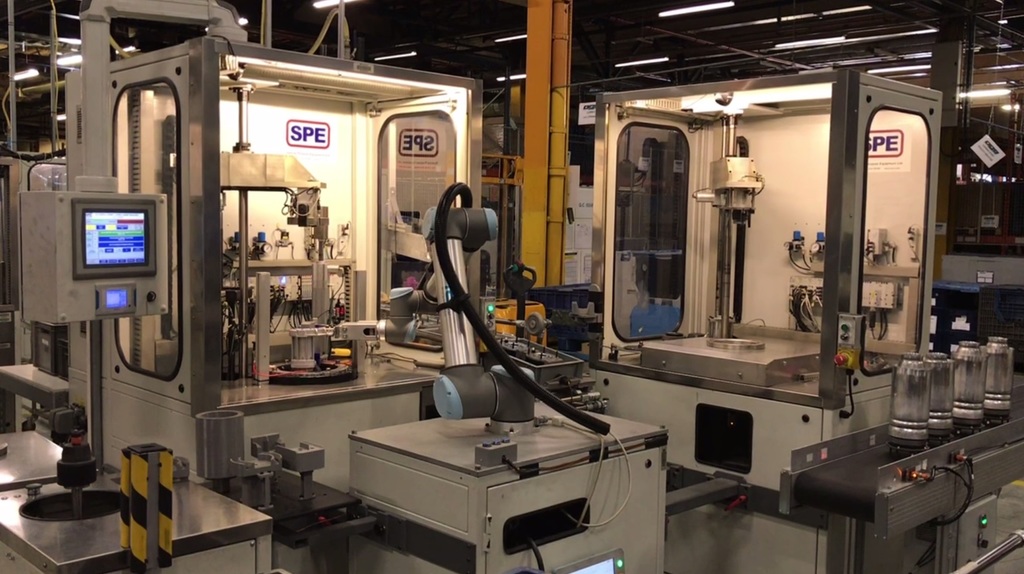 Since taking delivery of the UR10, which was supplied by RARUK Automation, BWI Group has been impressed by the cobot's inherent flexibility, as Mike Hathway, Industrial Engineer at BWI Group comments: “First of all we put the UR10 to work tending a crimping machine,” he says. “The machine crimps outer canisters for air-suspension modules. To explain further, outside the flexible sleeve/bag that traps the air, there is a cylinder to help prevent over-expansion and punctures. The machine crimps the cylinder on to the bag, with the UR10 moving parts between each stage of the process: pre-check, crimp and after-check. There is one part in each station at any one time to provide continuous flow.”

Previously this entire operation was manual, with a BWI Group employee performing all tasks.

Not long after the cobot was installed, an internal change of strategy saw the manufacture of these outer canisters relocated to another BWI plant in central Europe, so the UR10 was re-assigned to a different machine.

“UR-series cobots are extremely flexible and can be adapted to a whole host of applications, so we had no trouble finding another role for it,” says Mr Hathway. “We moved the UR10 to a blow-moulding machine, where it extracts dust covers every 25 seconds and loads them neatly into a container ready for shipment to another plant. Previously, the parts would just exit the machine and land randomly on a conveyor, which although a bit messy was fine when we used the dust covers in-house. However, the dust covers are now sent to another facility for assembly, so shipping them in a tangled, random way would render them unusable. If we didn’t deploy the UR10 here we would need a full-time operative at the end of the machine to pack the parts neatly. This job would be particularly dull, comprising five seconds of work and 20 seconds of waiting – hardly an efficient or cost-effective use of labour.”

“We’ve been nothing but impressed with our UR10,” says Mr Hathway. “Aside from the flexibility and reliability, the collaborative capability means we don’t need guarding and can create a far more compact cell – with due care relating to speeds, motion and grippers. Our factory is highly utilised and we don’t have sufficient space to be adding large guarded robot cells. Guarding also adds to the cost of a project.

A different kind of robot is being used in collaboration with human workers at BMW factories in Germany. The group relies on innovative transport and logistics to increase efficiency and flexibility, to better link work processes, as well as to relieve employees from repetitive and time-consuming tasks. These concepts include Omron LD mobile robots for material transport that deliver a particularly high return on investment (ROI). These autonomous mobile robots are equipped with a conveyor tower - a height-adjustable load handling device, developed by system integrator, cts. 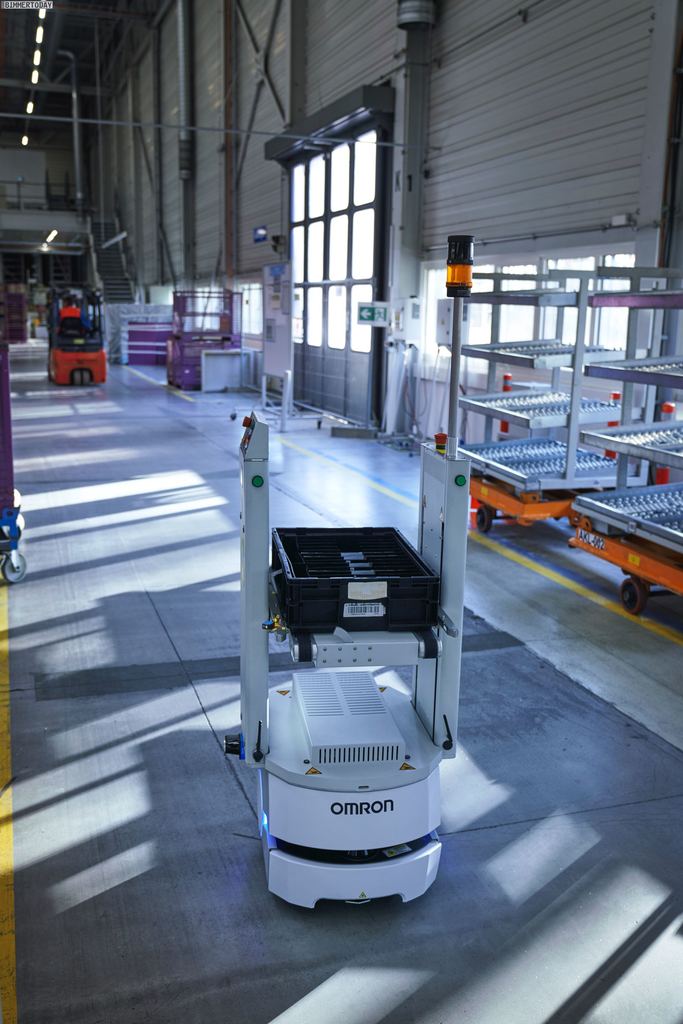 In 2015 BMW Group developed the first self-driving Smart Transport Robots (STR), together with the Fraunhofer Institute IML, for the transport of roll containers on logistics areas within production halls. The second generation is now in operation at the BMW Group Regensburg plant. The robots carry roll containers weighing up to one ton and transport them autonomously to the destination of the goods. They calculate the ideal route independently and move freely in the area. The new navigation method SLAM (Simultaneous Localization and Mapping) does not require any permanently installed navigation transmitters in buildings and thus can be used quickly in a new environment. A built-in battery module of the BMW i3 powers the STR for a whole working shift. The delivery of urgent small parts is handled by a smaller version of the STR - the miniSTR based on the Omron LD mobile robot.

While technology development the manufacturing process and the supply chain continue apace, it is, if anything, far surpassed by the innovations seen in the cars themselves. And as the technology available in cars evolves, it is more important than ever that these systems are easy to use, and that people trust it will help to keep them safe when they drive. Augmented reality (AR) heads-up displays (HUDs) are one such technology, and are paving the way for intuitive driving, greater situational awareness and as a result, improved road safety, asserts Jamieson Christmas, CEO & Founder at Envisics.

So, what is a HUD? Simply put, a HUD is a transparent display that presents pertinent driving data from the outside world to the driver. Typically the optics are designed so that the image is presented approximately two metres in front of the driver, with the road scene as its backdrop. These devices free the driver from having to glance inside the vehicle in order to obtain essential driving information.

Some cars, such as BMWs, have had HUDs in some of their models for several years. However, existing HUDs are limited in 2 ways. Firstly, they use LED backlit LCD screens to render images. The LCD pixels act as light valves, opening to let light through from behind. This process is extremely inefficient, wasting more than 90% of illuminating light available when projecting imagery onto the windscreen. Secondly, the small display area limits the type of information that can be displayed - essentially showing a subset of dashboard information.

the ‘AR’ element in AR-HUDs brings in the ability to overlay real-time, real-world relevant data.

So, why are AR and Holographic HUDs the future? Well, a HUD can be considered a blank canvas – it can only project the information fed into it. Using intelligent computer systems, the ‘AR’ element in AR-HUDs brings in the ability to overlay real-time, real-world relevant data. The development of accompanying technologies such as LiDaR (Light Detection and Ranging), and intelligent vision systems means that more information than ever before is available. 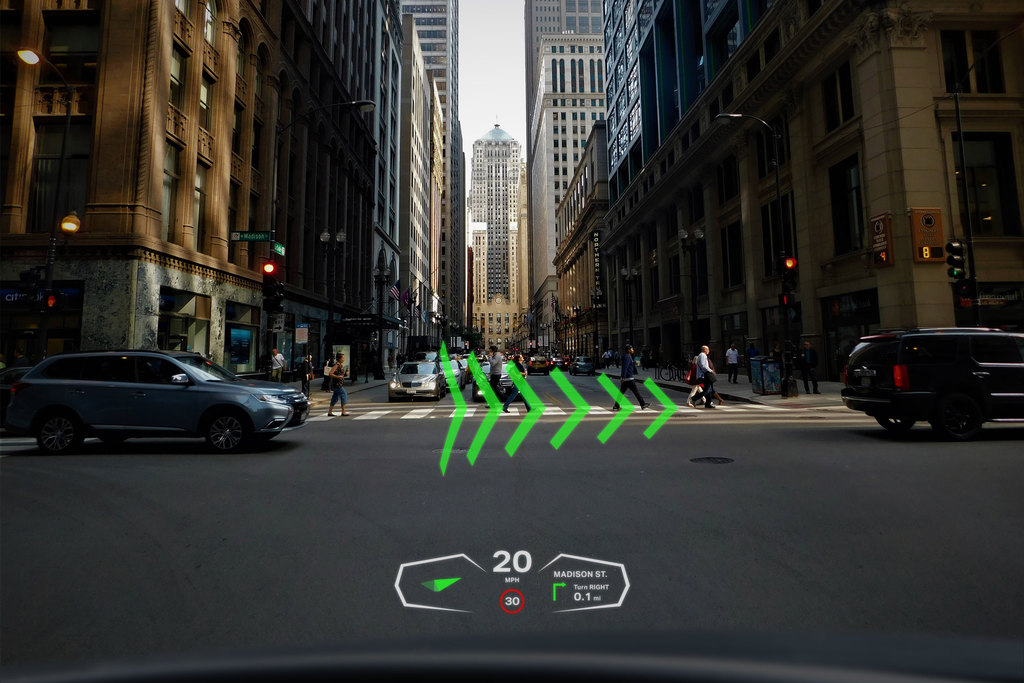 The projection technology in AR-HUDs is also naturally more sophisticated than current HUDs. Through a process of computation, Envisics creates and displays holographic representations of the AR data that can then be overlaid on to reality. As this technology uses laser holography instead of LEDs, there is no backlight which means greater optical efficiency. Envisics’ AR-HUD design shrinks the HUD packaging, while consuming significantly less power than competing technologies - in the age of electric vehicles, every milliamp counts! The holograms themselves can also be generated on multiple planes, and at multiple distances, with resolution and clarity six times greater than that of the human retina.

Christmas urges you to imagine the road markings on your journey are slightly faded or it is dark outside making it hard to see how the lane bends. AR HUDs would be able to show you exactly where to drive by marking it out on the road for you. It would highlight potential hazards earlier than you otherwise would have spotted them, enabling quicker reactions. The more aware drivers are of their environment, the better-informed decisions they can make, the safer they are, and the safer everyone else is. It is a gamechanger.

Additionally, the next generation of the technology is safer because it’s more intuitive, and creates less distractions. We have all been in a situation where we have looked away from the road longer than we are comfortable with because we need to better understand the route on the satellite navigation system. Having the same information presented in an intuitive form upon reality significantly enhances safety.

AR and Holographic HUDs will begin to be installed in vehicles over the next few years, the race to bring this technology to market having already begun. Looking forward, Christmas feels it is likely that this is going to be an essential technology in all vehicles, and drivers will come to rely upon and value the increased safety it brings.

Volkswagen Commercial Vehicles is rolling out augmented reality headsets for technicians across its Van Centre network to help speed up complex repair work with the potential to save customers five years of downtime – equal to £1million.

The innovative system allows experts based at the Technical Support Centre (TSC) to send precise visual instructions remotely to technicians at Van Centres and Mobile Service Clinics to ensure any maintenance issues can be fixed as quickly and efficiently as possible, minimising the time a van spends off the road. 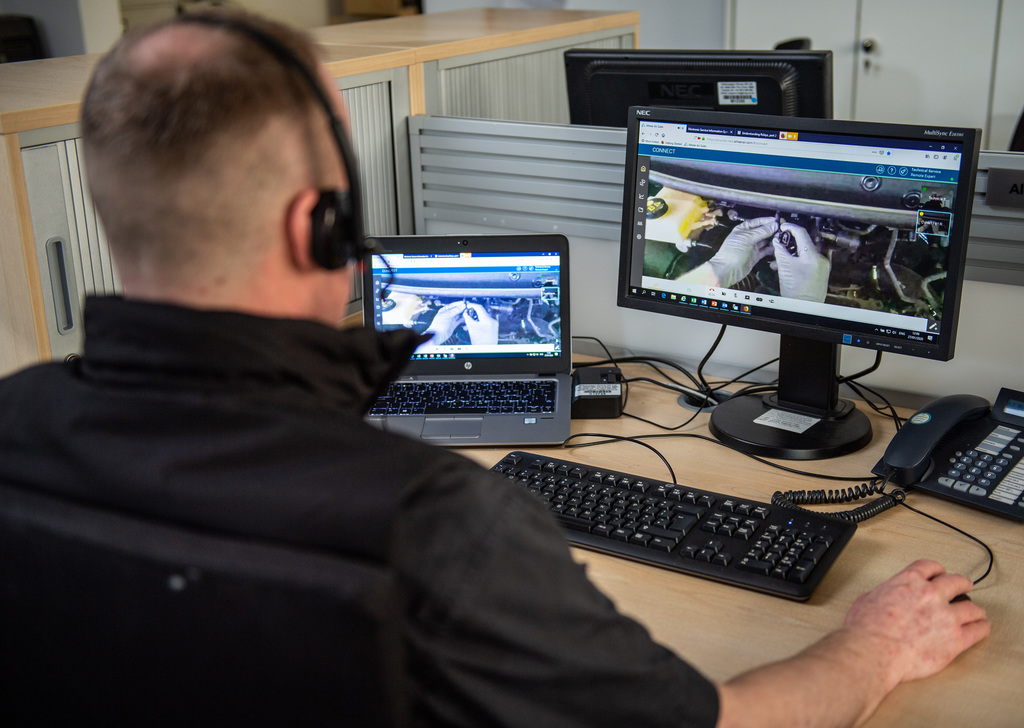 The nationwide rollout follows a successful trial that saved customers a year of downtime – equal to almost £250,000 – with repair efficiency up by 93 per cent. Not having to physically travel also meant a reduction of over 2.5 tonnes of CO2 for the TSC.

Each of the 67 Van Centres and 30 Authorised Repairers across the UK will have access to a pair of the RealWear glasses, which includes microphone, head camera, display screen and voice activation.

If technicians face complex or unusual servicing points – expected to be around 500 across the UK in 2020 - they can use the technology to connect directly with the Technical Support Centre at head office in Milton Keynes. The expert is then able to support the field technician through the diagnosis and repair by augmenting images, wiring diagrams and adding repair suggestions into their view.