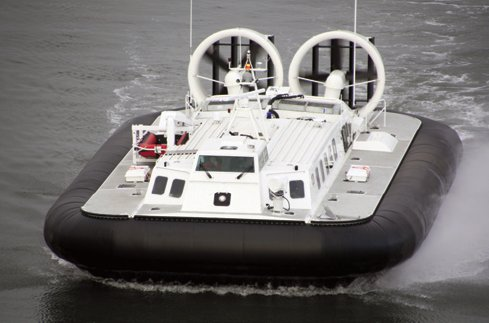 Based in Southampton, Griffon Hoverwork has pioneered the development of the hovercraft and has been involved in the manufacture and operation of hovercraft since they were first conceived over 40 years ago. One of the company's most popular models with coast guards is the 8000TD, which can be configured to carry passengers, vehicles and equipment for disaster relief or medical evacuation.  In 2001, the Indian Coast Guard acquired six 8000TDs, two of which were build at Griffon Hoverwork's UK premises and four in Calcutta. At 21.3m in length, with a payload of 8 tonnes, and with a maximum speed of 45 knots powered by two Iveco diesel engines, the performance of these hovercraft is impressive - so much so that Griffon Hoverwork recently secured a £34m contract to supply the Indian Coast Guard with 12 further 8000TDs. The craft proposed by Griffon Hoverwork were an upgraded version of the Indian Coast Guard's existing fleet, with several enhancements in design and technology. Among these enhancements is a condition monitoring system from Monitran. Designed and developed as a turnkey solution, the system employs 14 MTN/1100W general purpose constant-current analysis sensors with AC outputs, sealed to IP68 (submersible) and supplied with marine-approved cables. These feed into a bulkhead-mounted waterproof cabinet that contains 14 MTN/8066 g-mac signal conditioning units. Each g-mac unit provides analogue (AC) outputs proportional to velocity and peak g, which feed into a PCB-mounted microcontroller programmed by Monitran to drive a touch-screen display on the front of the cabinet. Several screen views are available but the most useful show:
MORE FROM THIS COMPANY