As technology traditionally used in the military and defence sector is increasingly being adopted in commercial sectors, CDA takes a look at some of the military developments that could conceivably make the crossover into civilian life

Within the last few weeks, the Knowledge Transfer Network (KTN) has published a significant new report into the possibilities of exploiting and adopting Robotics and Autonomous Systems (RAS) technologies for commercial markets and not just in their traditional province of the military and defence sector.

The sectors considered by the report - and its 138-page Annexe - are: Agriculture, Energy, Automotive and Road Transport, Aviation, Health and Social Welfare, Environment, Emergency Services, Space, Marine and the Water Industry. The emerging market in RAS products alone is estimated to be worth in excess of £13 billion - good news for the components suppliers active in this sector.

Applications include, amongst many: autonomous submarine vehicles conducting deepsea exploration and maintenance in oil and gas facilities; remote systems conducting maintenance and repair in nuclear contaminated areas; and lunar and extra-terrestrial exploration.

The transfer of capability between sectors is a major issue, commonly known as the "Valley of Death”

The UK has had thriving research programmes in the area for some considerable time, mainly aimed at high value civil and military platforms in the Aerospace and Defence sector. Now, the transfer of capability between sectors is a major issue, commonly known as the "Valley of Death”.

We will return to this report in a future issue.

Heason Technology recently supplied custom electric actuators and servo drives for a UK manufacturer of submersible marine vehicles. The rotary actuators power the rudder and hydroplane controls of scaled submersible vehicle test models which are used for a range of studies for hydrodynamic design evaluation of military submarines.

From a motion control perspective, the rotary actuator specification used for this application is relatively straightforward: a servo motor with feedback resolver and a servo drive positions its load via a high-reduction precision gearbox system into right-angled output shaft, with an absolute resolver providing true ‘load position’ output with a better than 0.1 degree resolution and medium accuracy. A limited angle of rotation of +/- 40 degrees using end-of-travel limit switches and hard-stops is also specified. Although the moderate continuous torque output of some 12Nm at speeds of 10rpm would make this requirement fairly straightforward, this specification is however complicated by the environmental requirement for a fully sealed and oil filled design with active pressure compensation for exposed operation at underwater depths in excess of 30m – complete with pressure testing and certification. 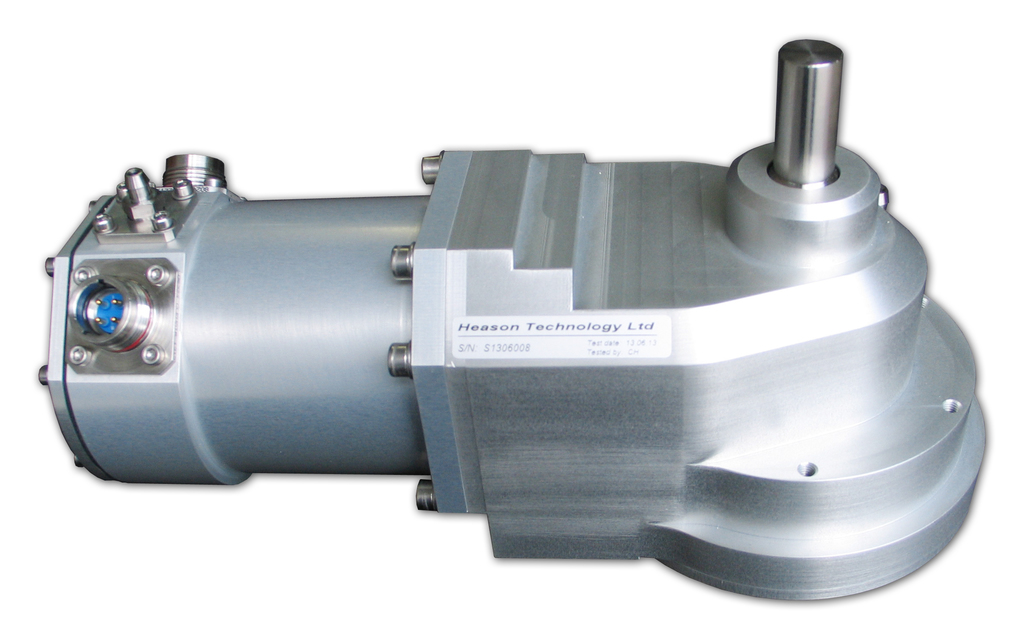 The motor technology chosen is the compact and high torque-to-size HT series frameless direct-drive servomotor system from Emoteq with a Harrowe brushless resolver fitted for servo feedback to the servo amplifier. The frameless design, with a separate rotor and stator, optimises the available space and is mounted directly on the integral heavy-duty bearing system of the innovative TwinSpin TS50 gearbox from Spinea. This high-precision and high torque, zero-backlash trochoidal gear system is hard-coupled to a 2:1 precision bevel gear and its right-angled load output shaft to provide the orientation required in the envelope available. The bevel gear output shaft has a second Harrowe resolver fitted for absolute angle output at the load. To support the axial and radial forces at the drive shaft, a fully sealed duplex angular contact pair bearing arrangement is used.

The UH-Tiger helicopter is a medium weight, multiple role support helicopter developed for the German Armed Forces. The aircraft is known for being the first all-composite, European-built helicopter. Advanced features include a glass cockpit, stealth technology and tremendous agility for enhanced combat survivability. 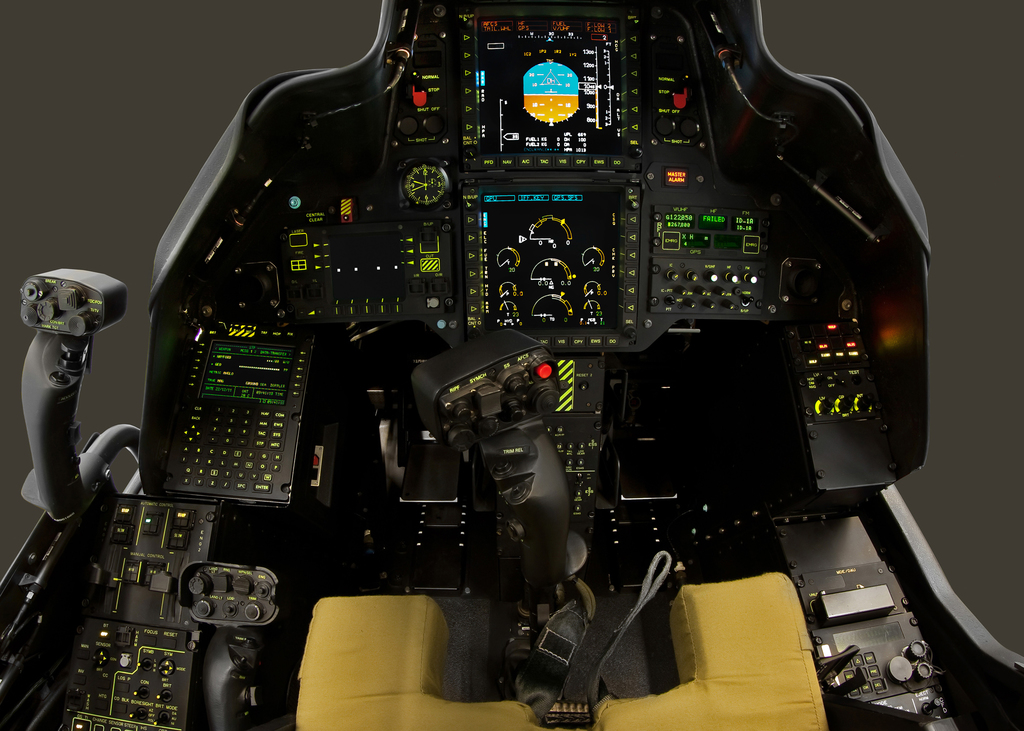 Airbus Helicopters has selected VectorCAST from Vector Software for software testing at the company’s division in Germany. The VectorCAST/Cover, VectorCAST/C++ and VectorCAST/Ada tools combine to form a fully automated regression test environment to continually verify the correctness of code.

Airbus Helicopters in Germany develops software for the UH-Tiger military helicopter, and the firm needed to quickly achieve DO-178B structural coverage while using limited resources to develop User Control Panels. The RTCA DO-178B standard is one of the most stringent safety critical standards in the world, incorporating the most rigorous testing and traceability requirements of any industry.

One of the biggest obstacles in detecting explosives is quickly testing suspicious items and surfaces in the field, and returning the results of the analysis very quickly so responders can make decisions and take action. In addition to the physical challenges of sampling tiny amounts of material and routing the samples to the detectors, the unit must also gather information and communicate results quickly. 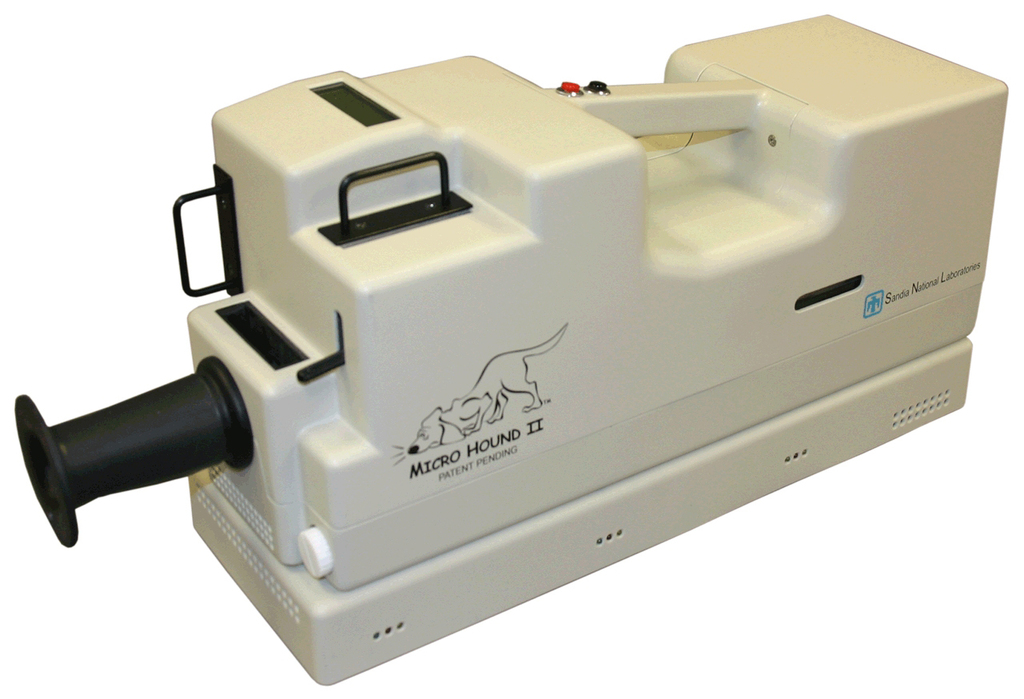 The MicroHound handheld explosives detection system combines, in a single platform, a miniaturised sampling and pre-concentration system with multiple, highly sensitive chemical microsensors capable of detecting nanogram amounts of explosives. The sampling and pre-concentration technology was originally developed and patented by Sandia for an explosives detection personnel portal. This lightweight system weighs under 1kg and can detect explosives in vapour and particulate forms by using two sampling methods, vacuum inhale and swipe.

The National Instruments NI PCI-6025E multifunction DAQ device collects and analyses spectra from the IMS using NI LabVIEW Real-Time software. In parallel, the MicroChemLab analyses the collected sample and communicates the results to the host system. If either detector finds contraband, the unit displays an alarm to notify the operator. Previous applications required larger computers for control and analysis or dedicated hardware that limited flexibility. 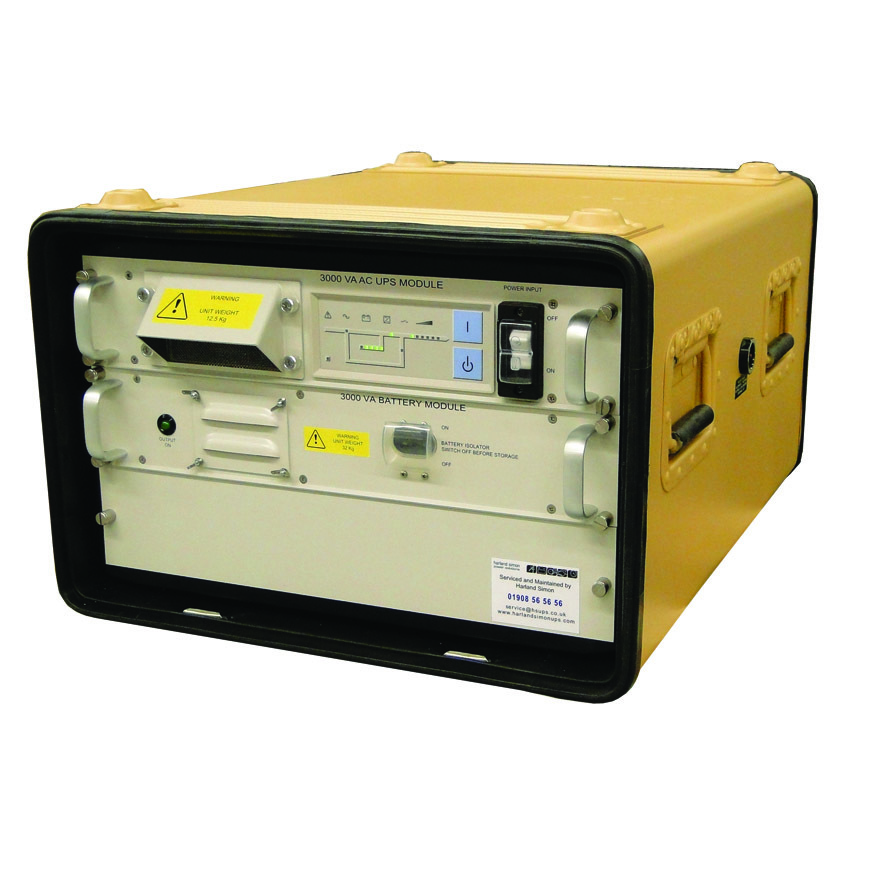 In addition to models in the core product range, bespoke products may be designed and installed to a variety of specifications available - WIMES (water), MILSTAN/DEFSTAN, IACS-E10 (marine), LUL and Network Rail.

Level 1: COTS (Commercial Off The Shelf) - usually shipped direct from the manufacturer

Level 2: Simple Customisation - requiring a few simple modifications to a UPS to conform to stringent testing according to the end usage.

Level 3: Complex customisation - complete redesign to exactly meet requirements: this can include special metalwork and connectivity to meet physical requirements and space constraints, plus special testing to environmental or electrical standards.

Also at Counter Terror Expo 2014, Digital Barriers launched SafeZone-edge, its edge-embedded automated intrusion detection system. SafeZone-edge avoids the cost and complexity of server-based video analytics systems by undertaking the video processing on the camera. In February 2014, SafeZone-edge was certified as a UK Home Office i-LIDS approved primary detection system for operational alert use in sterile zone monitoring applications, such as may be encountered in critical infrastructure locations, oil and gas facilities, industrial complexes, transit locations and other high-security or sensitive sites. 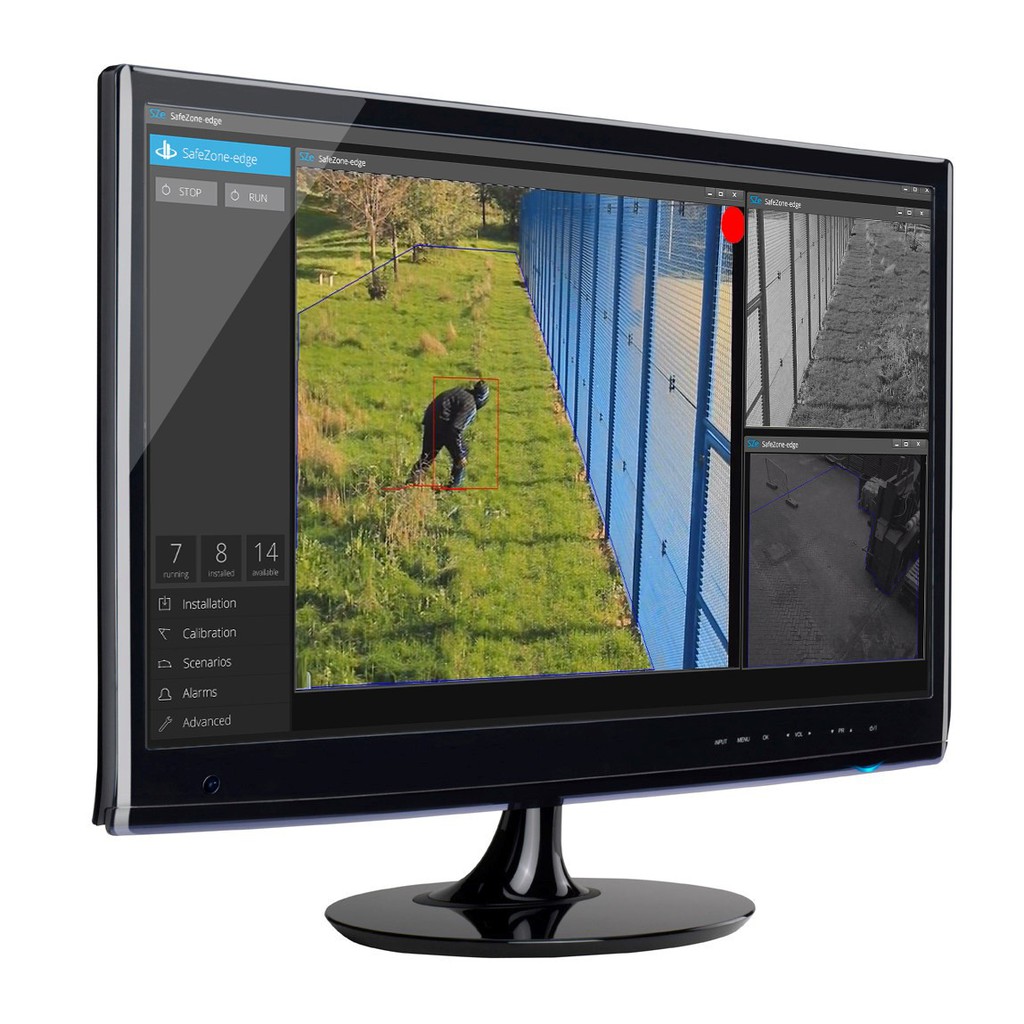 SafeZone-edge is able to detect reliably and with very low nuisance alarm rates in even the most difficult conditions – including adverse weather and variable illumination – and is able to adapt automatically to seasonal changes.

DEM Manufacturing has launched a range of heavy duty, IP rated industrial units suitable for use in harsh environments. The product range meets minimum exposure IP66, IP67 and IP68 for protection against jets of water and full submersion. 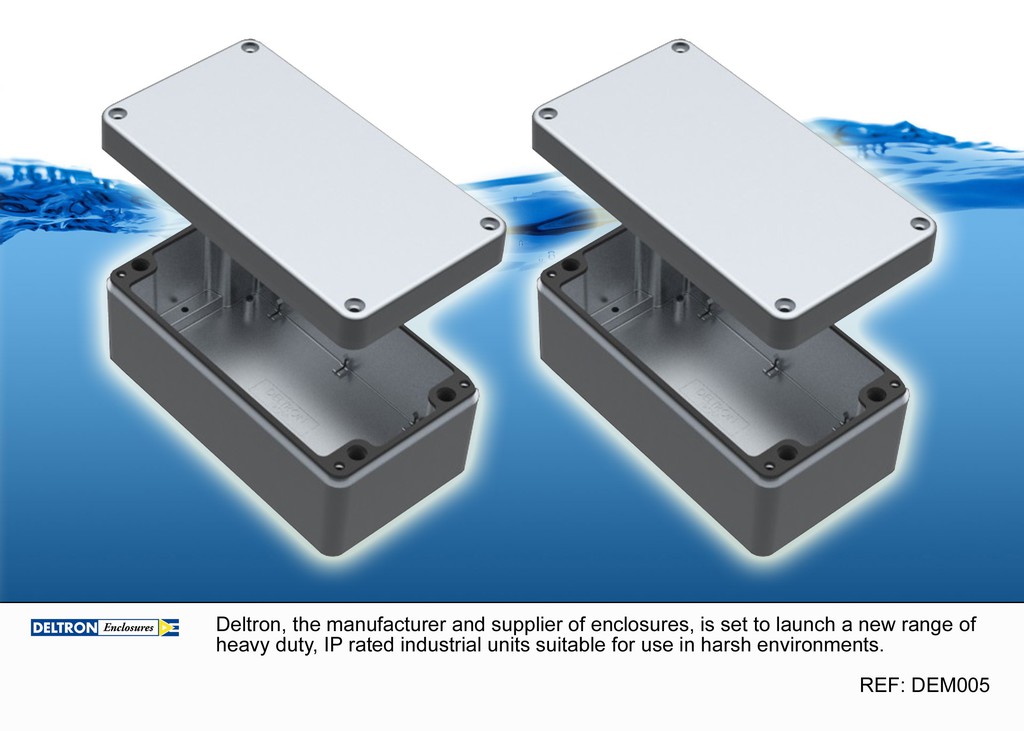 The Deltron heavy duty enclosure range incorporates a unique and innovative lid design, which encloses the silicone seal well inside the box and allows for excellent EMI/RFI screening. The silicone seals make the new range both oil and petrol resistant while captive screws improve security and eliminate snagging. The IP68 units are suitable for continuous submersion up to depths of 10m, for up to 20 hours. 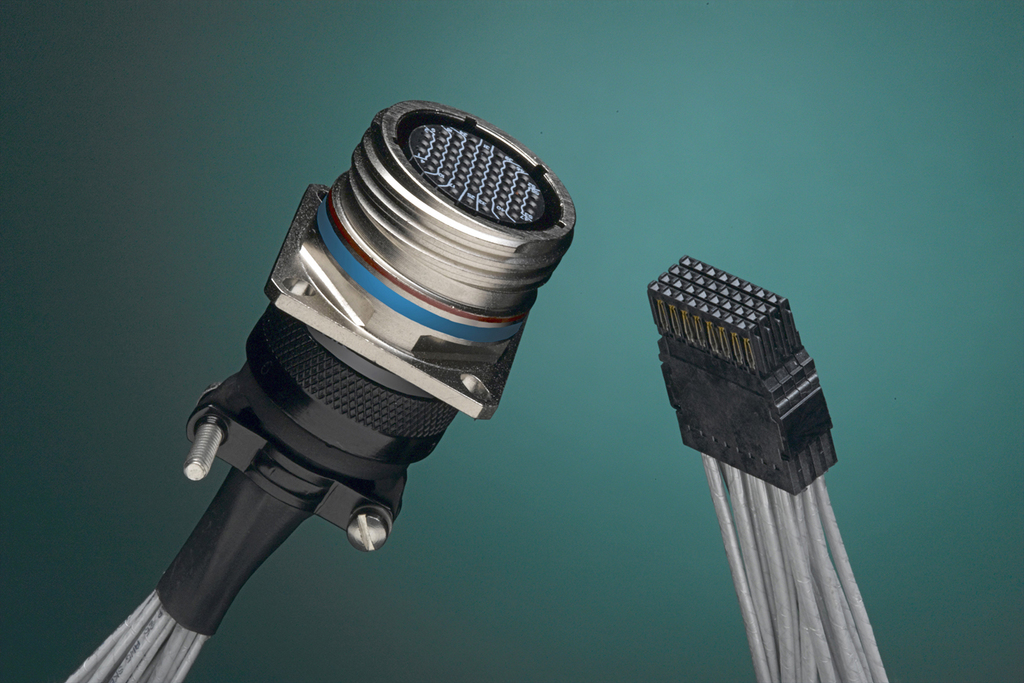 The assemblies reduce high transmission losses caused by long trace lengths on circuit boards and offer data throughput ranges of 2 to 25Gbps, depending on the configuration. Optional metal backshells provide 360 degree EMI shielding and reduce crosstalk at the mating interface. A positive latch ensures a solid connection under shock or vibration with an intuitive squeeze-and-pull mechanism.

A study by the UPV/EHU’s Magnetism Group at the Israeli Elhuyar Fundazioa is making progress in furthering understanding of the surface magnetic behaviour of glass-coated microwires and has concluded that they are the major candidates for use as high sensitivity sensors.

Microwires were created in the former Soviet Union for military purposes

Microwires were created in the former Soviet Union for military purposes. They formed the basis of the camouflage of a model of spy plane used by the Soviet army, but for a long time the scientific community has been studying them for other purposes. 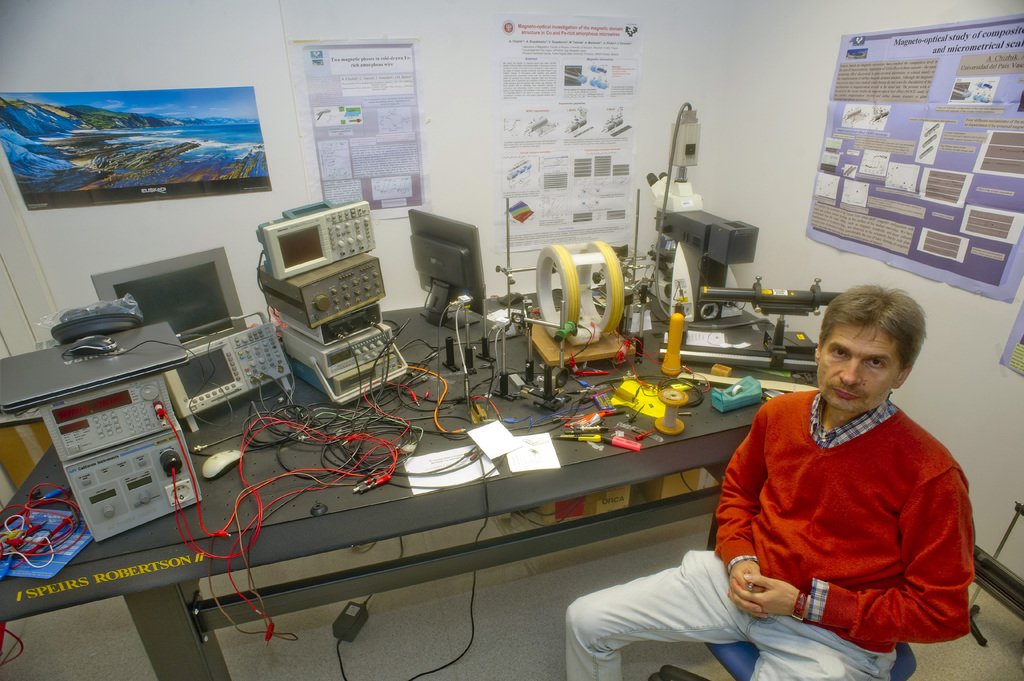 Microwires have a metal core and a crystal skin, effectively a glass coating. The core of the microwire is a ferromagnetic alloy, which varies according to the metals used in the alloy and the final geometry of the wire. "One of the best-known applications is that they can be used as sensors in the electronic compasses of mobile phones,” says Alexander Chizhik, a member of the group. "These are sensors that allow the position of the mobile phone owner to be determined in space just as if the device were a GPS."

Like the sensors in mobile phones, various sensors developed in collaboration with the Japanese company Aichi are currently being used in the automotive industry or in traffic surveillance vehicles.

Many unusual materials, such as the microwires described above, do not respond well to traditional laser marking.

Technifor is addressing this problem with its TG400 green laser. With a 532nm wavelength, this new marking technology permits marking of materials that do not interact with other classic laser equipment (using near-infrared 1064nm) such as YAG, YVO4, Fibre or CO2. 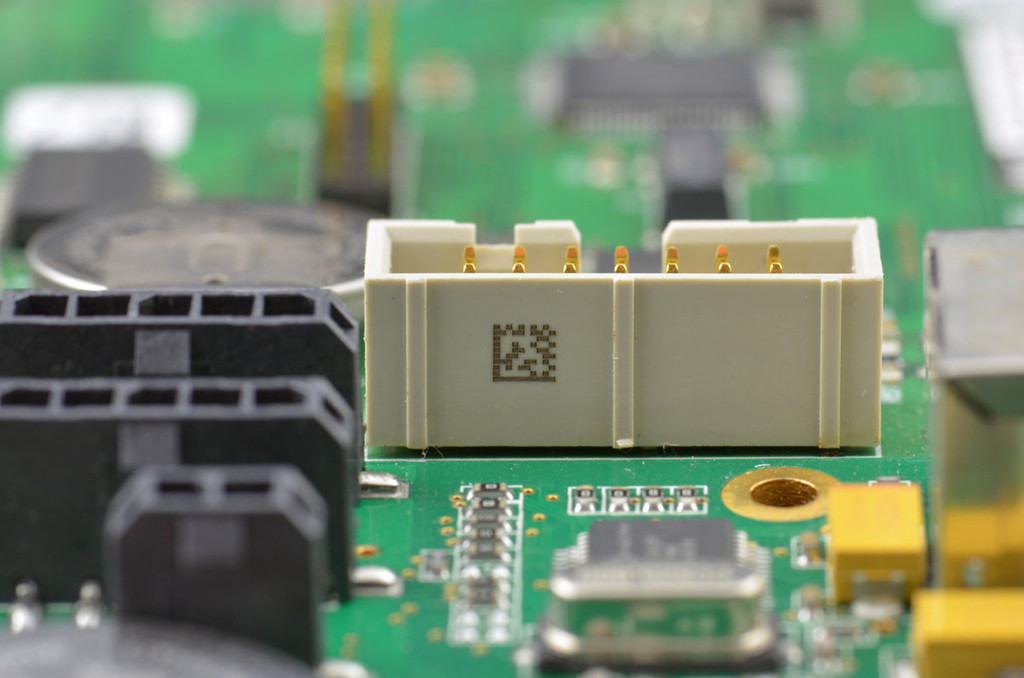 Applications may be found also in the medical and consumer electronics sectors, to enable marking of sensitive materials such as silicon, reflective metals (copper, silver, gold, printed circuits ceramics and a wide range of plastics.

An exceptionally fine 30 micron beam delivers the marking energy, and is suited for small characters and Data Matrix codes. There is a reduced heat-affected zone, avoiding material damage or distortion.

Driving the TG400 green laser, software developed by Gravotech Group helps the implementation of identification and traceability in any production process.