Andy Pye finds that a lot of the signals about where the rail industry is going are coming from mainland Europe, more often than not Germany. Here’s your ticket… 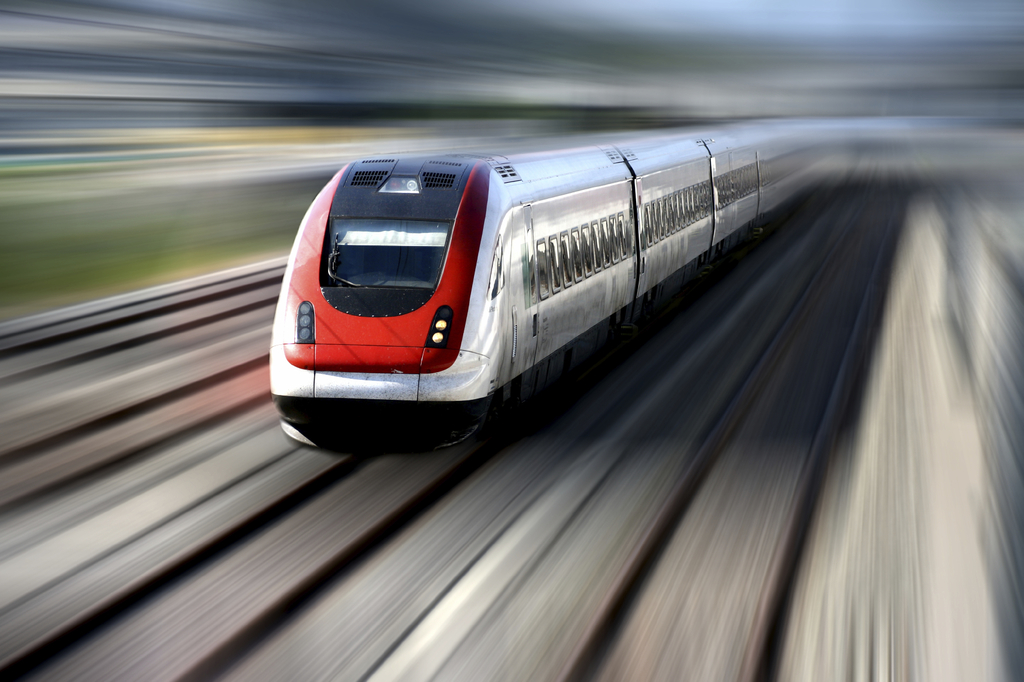 Walking down the aisle of a train at high speed, you may be forgiven for thinking that there's not a lot going on behind the scenes. However, despite the UK's rail infrastructure ageing. the push continues towards fuel efficiency and reduced emissions. Though this is leading towards more electrification, technology investment is also being directed towards managing dual-power changeover control to ensure it is smooth and efficient. Work is also being done on making electric motors as powerful and compact as possible, much in the same way as hybridisation is happening in passenger cars and other road vehicles.

Power quality is one of the significant barriers in the drive towards more electric trains. Bringing together a network of high-power equipment in such a confined space inevitably leads to numerous issues such as electromagnetic interference, harmonic currents, telecommunication issues, flicker, and heat.

The electric propulsion system requires the supply current to undergo a process of power conversion and high-frequency switching. Although this provides a usable power supply to the traction motors, it also introduces harmonics, which can cause damage to components, as well as causing windings and transformers to overheat. 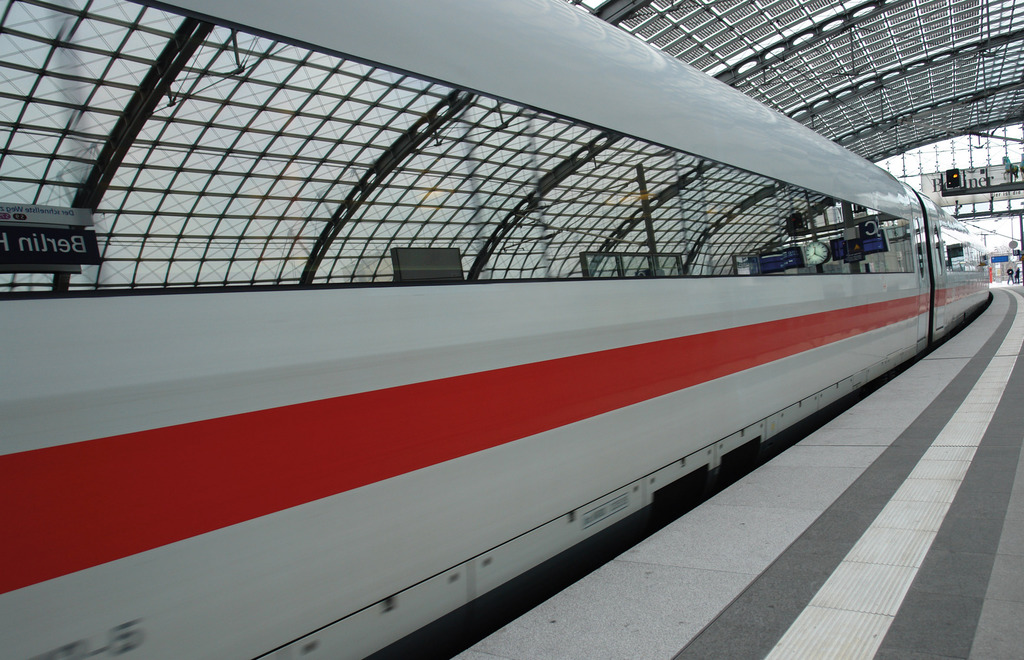 One recent development in this area has been the introduction by REO of the REOLAB 420, a high voltage direct current (HVDC) power supply used primarily for development and testing of frequency converters in railway applications.

Because the unit is free of electromagnetic interference and maintains a constant residual ripple over the entire adjustment range of the DC output, the REOLAB 420 provides a control error of as little as 1%. The output current is protected against short-circuit and overload and has been doubled at half the DC voltage selectable.

Industrial Ethernet plays an increasingly essential part in the working life of a train, used to relay real time information to operators and passengers on-board, as well as rail staff in terminals and control rooms.

Unfortunately, there are significant obstacles for a mass implementation of super fast Wi-Fi on trains. Security issues, the complexity of the sector and lack of infrastructure are only some of the hurdles that the UK needs to overcome. According to National Rail, only nine of 25 train operating companies currently provide Wi-Fi on trains.

Electroustic recently called for industry cooperation to see super fast Wi-Fi on trains become a standard. "Long-term collaboration between the Government, train operators, telecommunications, maintenance and equipment providers is necessary to improve infrastructure and access, and ensure the UK remains competitive in the wireless connectivity arena,” says Paul Carr, managing director and owner of Electroustic. "The US, for example, has already entered the next stage of Wi-Fi and uses a 4G network on the Long Term Evolution (LTE) platform that can host safety critical communications and enhance passenger service.” 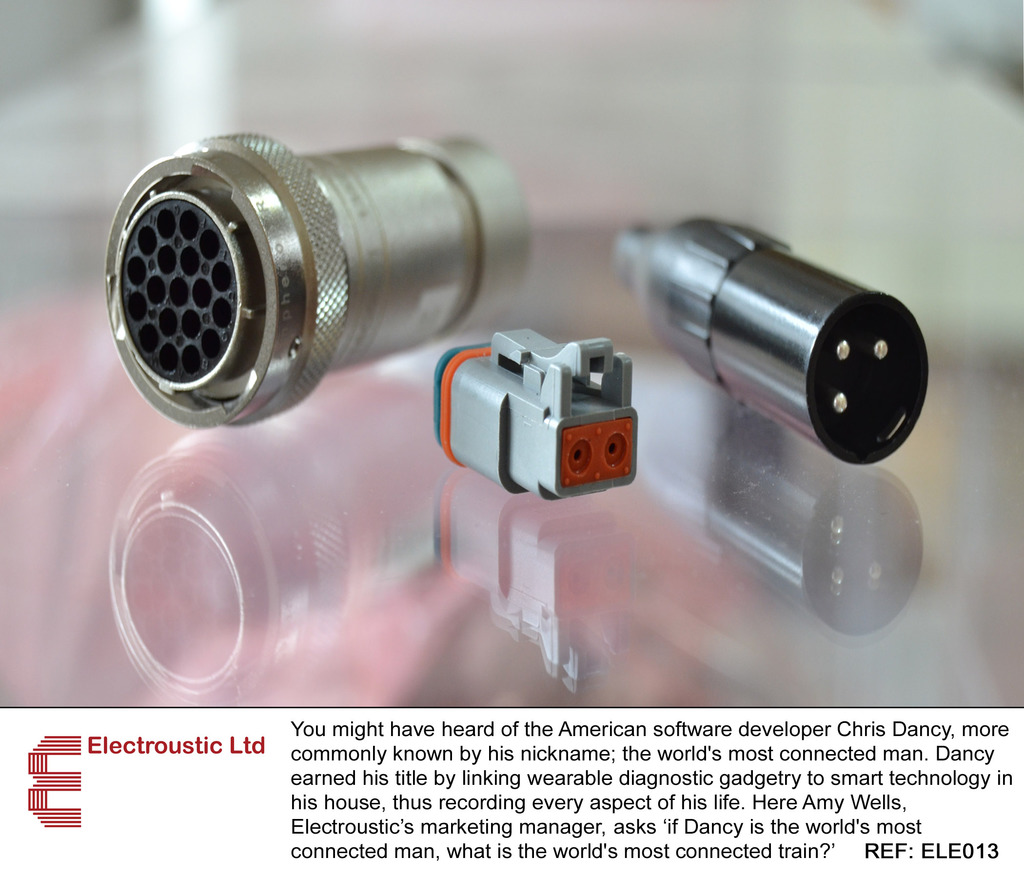 Electroustic supplies industrial connectors and Ethernet products that are used in all of these rail applications. Moreover, the company is a preferred partner of Hirschmann and Lumberg Automation, both of which are a part of the IRIS (International Railway Industry Standard) certified brand, Belden.

Closer to home, Electroustic has recently been commissioned to supply network switches for security purposes, to help with the London Overground capacity improvement project.

At the International Trade Fair for Transport Technology (InnoTrans) in Berlin, 23-26 September, COPA-DATA is showcasing reliable monitoring and ergonomic control of substations and tunnel infrastructures, as well as efficient energy and media supply.

Visitors can view a demo detailing of Zenon SCADA software, as well as the IEC 61131-3 based, platform-independent Straton PLC system. The key benefits include unrestricted communication and redundancy, which are crucial for implementing reliable and secure railway and infrastructure projects. 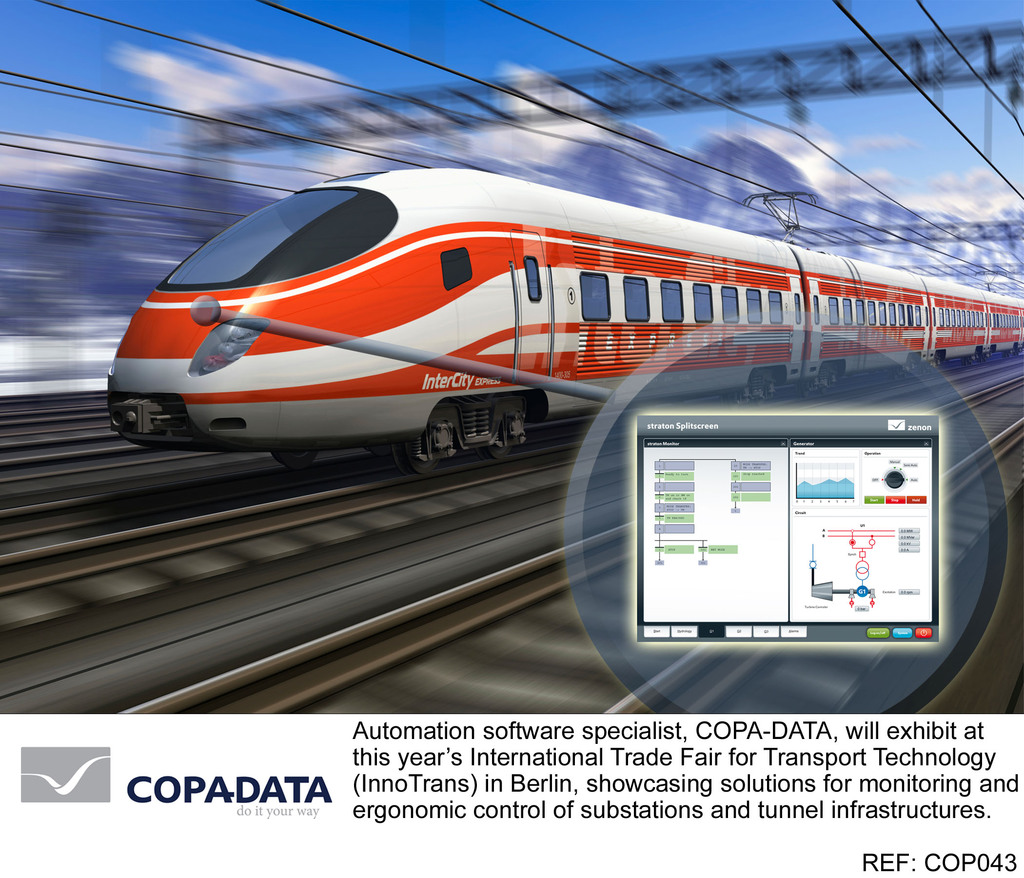 Zenon makes it possible to monitor and manage railway and tunnel systems, including electricity supply, ventilation or CO2 measurement.

Pilz PSS 4000-R safety PLCs have been used widely throughout Europe at level crossings, which has partly led Network Rail to develop a case for their use in the UK. Throughout the next five years, over 464 level crossings need upgrading, and the cost can be drastically reduced by replacing traditional railway signalling relays with safety PLCs.

Railway relays are large and a typical automatic relay-controlled level crossing requires a REB (re-locatable electrical building) to house them. There are also maintenance and fault-finding issues associated with the hardwired relay logic. Software-driven PLC logic with attendant space and lifetime cost saving are extremely attractive. Thanks to existing applications in Europe, Pilz has gained CENELEC approvals to rail-specific safety standards (EN 501xx) making the work of verifying and validating a PLC controlled level crossing even quicker. 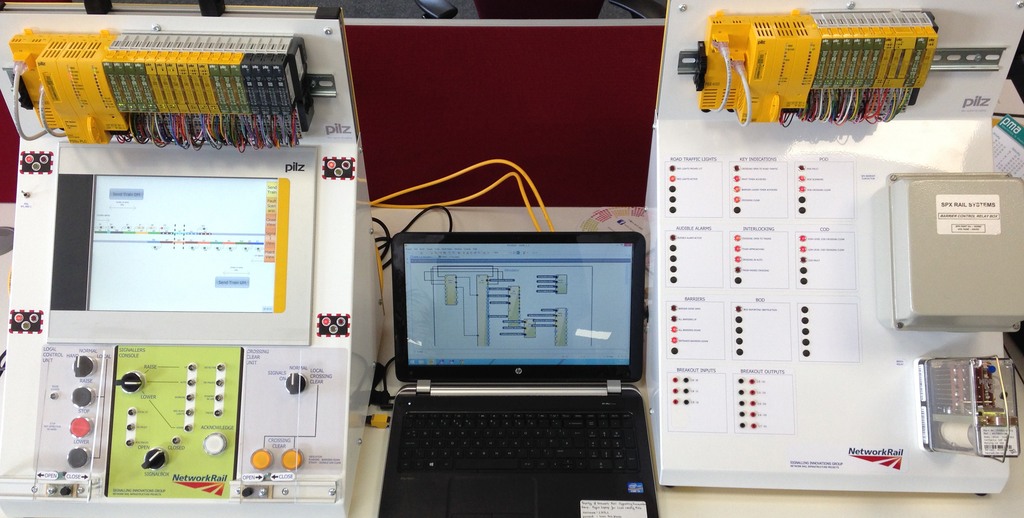 The first stage has been the development of rigs which show how a PSS 4000-R system can be used to control the most complex of level crossings, the MCB-OD, which is an automatic barrier system with RADAR and LIDAR obstacle detection. A real-world application is not far away as stakeholder buy-in has been secured on all major routes.

Over the past eight years, a £1 billion investment programme upgraded and replaced the Victoria Line’s rolling stock and signalling and control systems. The new signalling system uses 385 Jointless Track Circuits (JTCs) to detect train position, maintain safe train separation and deliver train headways capable of meeting an extremely demanding timetable. Track circuits are the sole means of train detection and play a critical role in the safe and reliable operation of the railway; however, no provision was made for any condition monitoring during the design and installation.

The Victoria Line Condition Monitoring Team of six professional engineers is using National Instruments’ NI CompactRIO to design and install an intelligent remote condition monitoring system that could perform real-time analysis of voltage and frequency for all 385 JTCs. 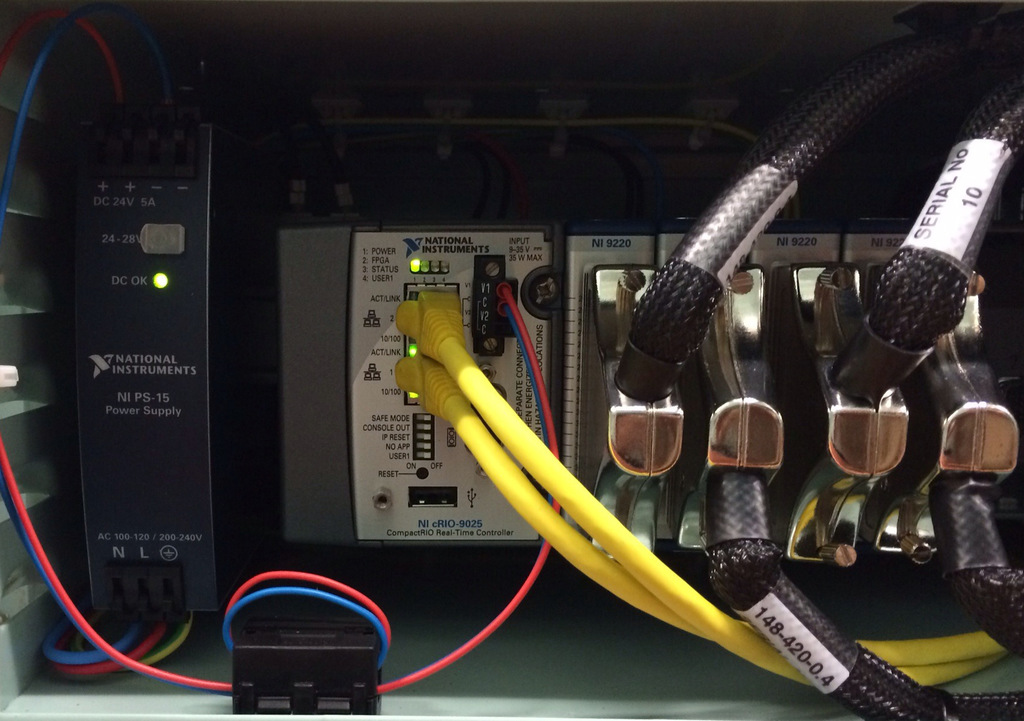 Following installation, it is possible to simultaneously acquire the JTC monitor point samples remotely from all track circuits on the line, which means the maintenance teams can proactively predict and prevent equipment failures before they occur.

Due to the Safety Integrity Level (SIL4) of the track circuit system, an independent SCM58 isolation barrier designed by US company Dataforth is used to provide galvanic isolation between the trac circuits being monitored and the CompactRIO device.

Since many problems in the electronics occur only under certain operating conditions, the control units each have their own event log. Critical errors are immediately signalled to the train cabin, so that the train can be delivered to the workshop. Using this information, the error can then be located more accurately using test & measurement equipment. 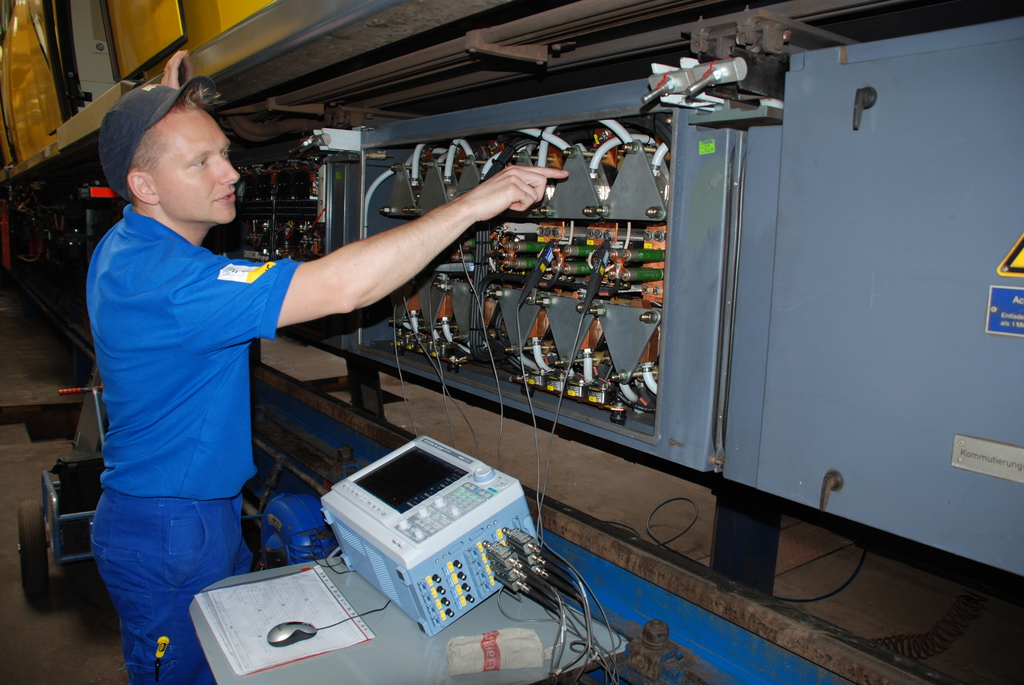 The next step is to use an oscilloscope to check the signals coming from capsule thyristors in the inverter. Since a 3-phase motor is used and a total of six thyristors need to be investigated, a Yokogawa DL850 ScopeCorder is used instead of a conventional oscilloscope. The DL850 can save up to 16 analogue channels so that the signals from all six thyristors can be easily displayed simultaneously.

The most common causes of failure in this area include defective thyristors, capacitors, ignition transformers and line interruptions.

Agility Trains, supplied by Hitachi Rail Europe will provide 122 new electric and bi-mode trains, for both the Great Western Main Line and the East Coast Main Line, manufactured in a new state-of-the-art manufacturing facility in the Northeast of England. The remaining trains will be manufactured for service between 2016 and 2018.

NSK bearings have been fitted to the first batch of Hitachi trains and are set to play a vital role in ensuring the trains built for the Intercity Express Programme (IEP) meet targets for minimum maintenance, high reliability and extended service life. Based on designs that have delivered in terms of performance and safety on the advanced high-speed Shinkansen trains in Japan, the NSK wheelset bearings have been engineered to match the operating life of the wheels themselves, which is over 1 million miles. The bearings will run for a six year period and be re-lubricated just once, coinciding with wheel maintenance. 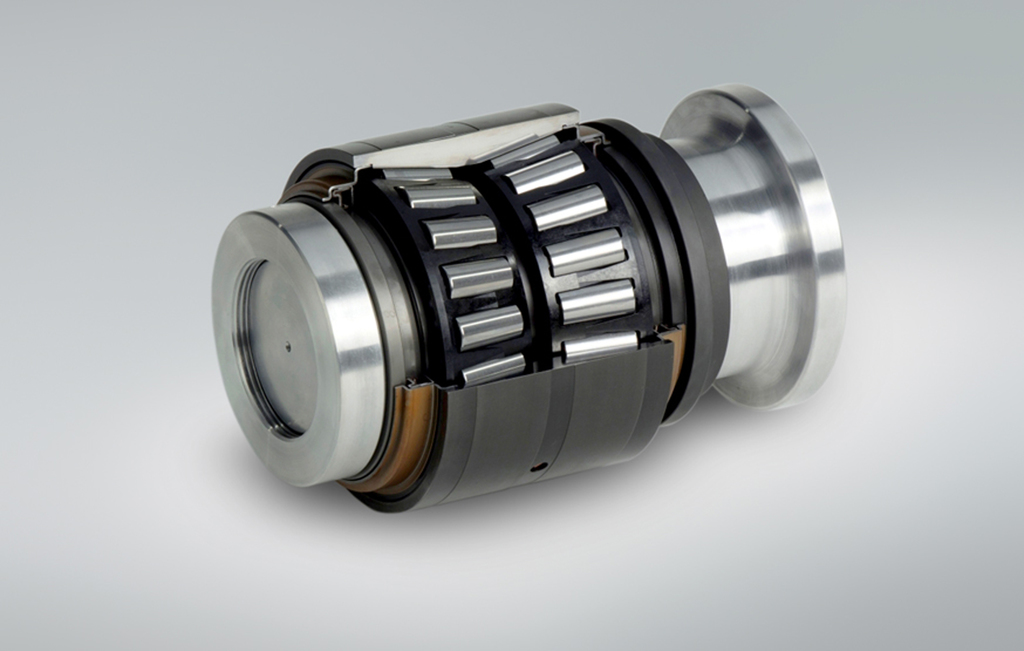 "The wheelset bearings are the interface between the static parts of a train’s undercarriage and the rotating parts, including the power transmission and wheels. Their performance and reliability are essential to the continued running of the train,” says Tony Synnott, NSK European Railway Sector manager, based at Newark. "The working environment is extremely tough for these double-row taper roller bearings, with high loads and lots of potential external contaminants present, plus temperature differentials and constant vibration. The steel we use to manufacture the races for example has been developed by NSK purely for extended life in bearings used for extreme conditions. The sealing arrangement and materials are also critical to keeping the grease fresh inside and other elements out.”

RFID (radio-frequency identification) is a technology that is rapidly gaining ground in rail applications. Typical applications include platform detection, train positioning systems, wagon-load recognition, and driver information systems. Its special feature is the fact that the transponder, containing the unique number and memory identifying a specific object, does not need batteries and is supplied with energy wirelessly via the RFID reader instead.

Specific benefits of RFID in rail applications include the fact that its operation is not affected by dirt or soiling, the maintenance-free characteristics of RFID transponders and readers, and the ability to link the RFID components via relays or networks with train control systems. 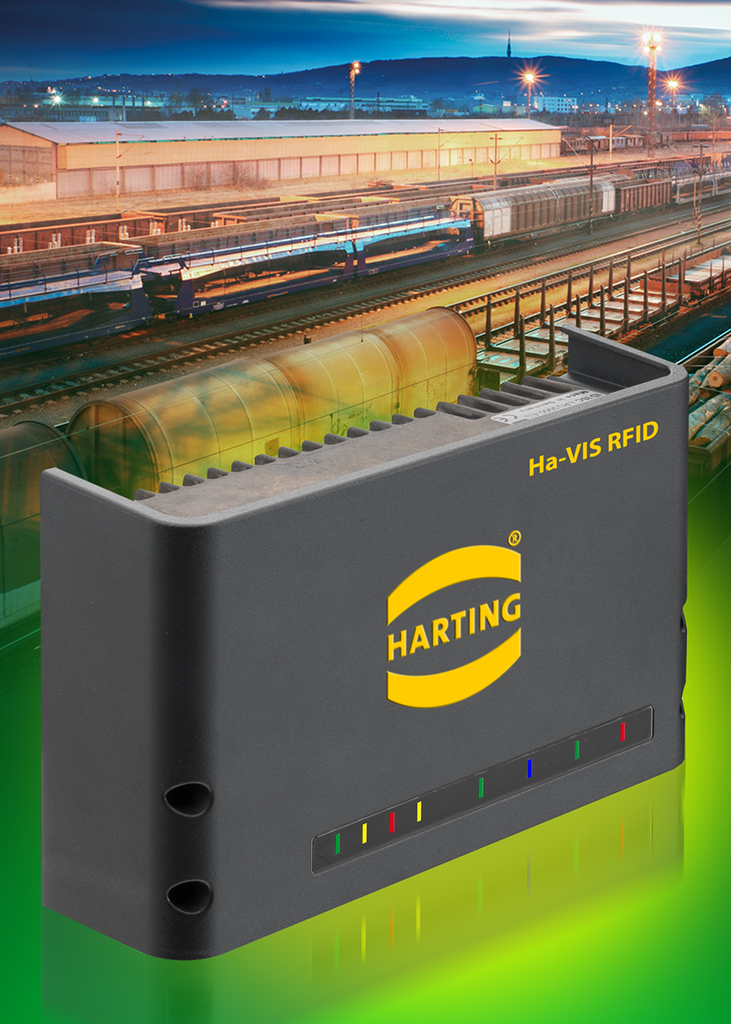 The HARTING Ha-VIS RF-R500 RFID transponder has been successfully tested in accordance with the European Standard EN 50155 for deployment on railway rolling stock. The EN 50155 standard lays down stringent conditions regarding electromagnetic compatibility, shock and vibration.

A consortium led by Berner & Mattner Systemtechnik in Vienna is investigating the satellite-supported position determination of rail vehicles and has the task of preparing a reliable solution for light rail and urban transport.

Satellite-supported positioning is a potentially cost-effective replacement for train positioning systems with costly rail-side equipment, in particular for light rail. At the same time, train positioning systems must meet very strict requirements in terms of reliability, accuracy, availability, and the integrity of position data, since incorrectly detected positions of rail vehicles can lead to significant hazard. The DITPOS RAIL project will therefore introduce an integrity calculation algorithm that meets the requirements for later approval. 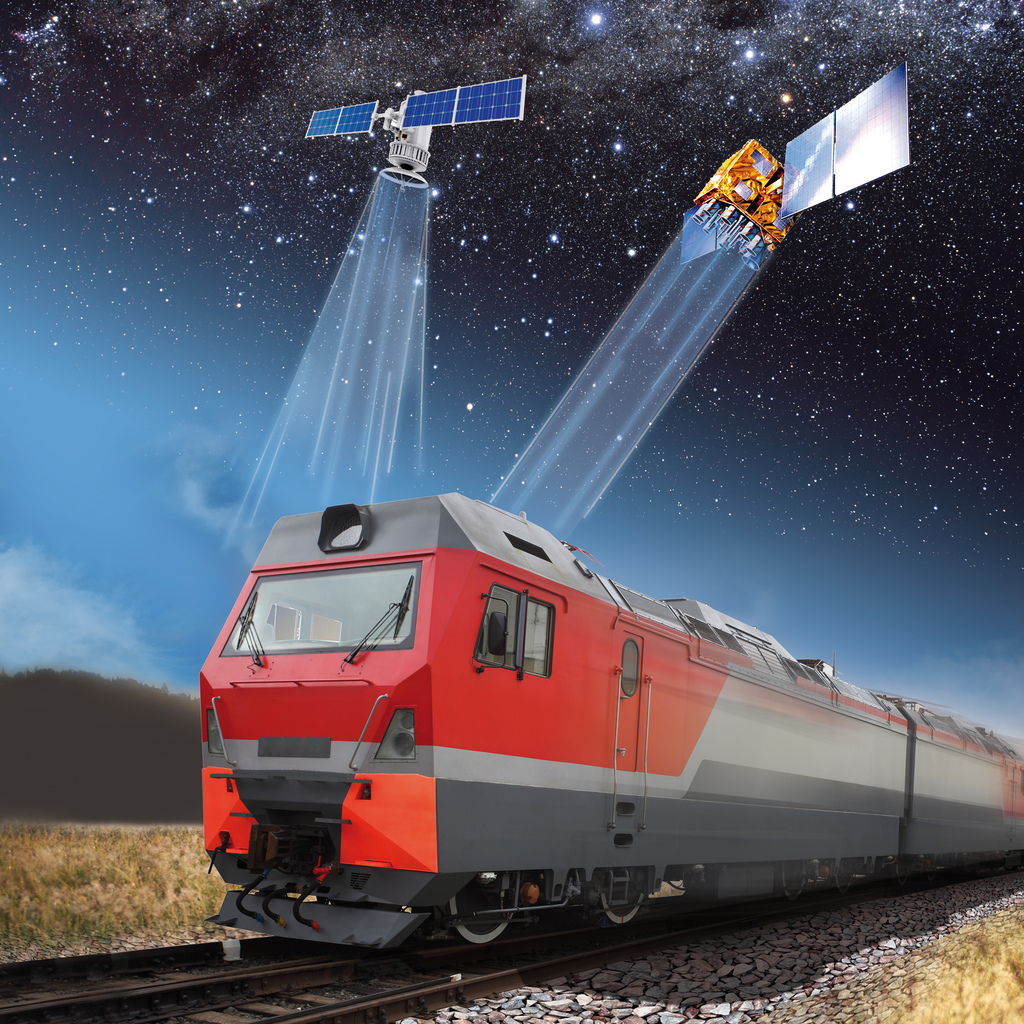