The UK’s first digital factory demonstrator has been launched at the Manufacturing Technology Centre (MTC) in Coventry, designed to showcase how a ‘fourth industrial revolution’ could shape the future of British manufacturing. The launch featured a virtual 3D factory alongside a physical production line capable demonstrating mass customisation of consumer goods. 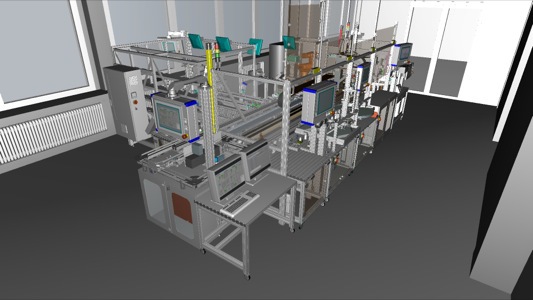 Siemens, the Electronic Systems Community (ESCO), automation trade association GAMBICA, HP, Shadow Robotics and Ubisense were among the organisations that contributed to the groundbreaking project.

The digital factory demonstrator, also known as the Industry 4.0 demonstrator, is the first of its kind in the UK and seeks to put Britain at the centre stage of global research and development in manufacturing.

The immersive, 3D virtual reality environment allows users to interact with a ‘living lab’ which has been modelled from an existing real-world machine.  The machine mimics a continuous production environment and allows universities, manufacturers and key stakeholders to innovate production processes using the latest technologies that help improve productivity, quality and energy efficiency.

Senior figures from across Government and the German Embassy also toured a demonstration of existing robotic capabilities found in UK manufacturing - to show the gap that exists between existing technology and future technologies capable of transforming UK manufacturing.

Siemens now wants to work with industry partners to build a full living laboratory at the MTC to link smart sensor technology to intelligent automation and supply chain systems.

Brian Holliday, managing director of Siemens’ Industrial activities in the UK and Ireland commented: "Today’s launch as part of the ESCO anniversary event is all about exploiting the Internet of Things in Industry – to ensure that Britain is at the cutting edge of applied manufacturing research.

"The UK must invest in digital and smart factories, not least because the concept of Industry 4.0 plays to our strengths and tackles many of the complex production and consumption challenges we face today. By investing in these technologies, UK factories stand to achieve up to 30% improvement in productivity, which could in turn aid accelerated economic rebalancing.

"We are calling for the establishment of a living lab in the UK and believe this will have a tangible impact on job creation - specifically addressing the UK skills shortage, as well as improving manufacturing’s share of UK GDP. We jointly support the proposals made today that industry and the Government match fund £6m over a three year period as part of a specific push to co-develop the world’s most advanced manufacturing technology standards here in Britain.

"We also believe enhanced capital allowances should be extended to cover automation technology in the same way as they have been applied to energy efficient technology to stimulate investment and improve SME productivity.

"In addition, we plan to engage with the Manufacturing Advisory Service to develop an Industry 4.0 work stream - which should be reinforced with a one-off £3m funding boost to develop tool kits for manufacturers wanting to invest. Ultimately, we support the suggestion of a Joint Technology Initiative with Germany and the EU for the funding of a pan-European industry research project into Industry 4.0.”

The launch was attended by Martin Donnelly, the Permanent Secretary for the Department of Business Innovation and Skills, who addressed a number of leading industry representatives. He spoke of the need for Government to maintain a strong focus on industrial investment whilst commending the work of the Electronic Systems Community Council, which celebrated its first year anniversary as part of the launch.

ESCO is co-chaired by Warren East OBE, former CEO of ARM, and Baroness Neville-Rolfe DBE CMG, which together with senior representatives from the UK’s electronic systems industry and the Department for Business Innovation and Skills (BIS), defines the direction of the strategic blueprint for the industry.

Warren East said: "Industry 4.0 is a revolutionary concept which offers significant growth and job opportunities.  Electronic systems companies will play a key role in developing the robotic, sensor and virtual reality technology that will deliver future factories the world over.  The demonstrator we are launching is the culmination of industry and Government collaboration and provides a platform for companies large and small to test and demonstrate their technology to potential customers and conduct research simulations.”

Clive Hickman, CEO of the MTC added: "We are proud to be at the centre of the UK’s first digital factory demonstrator and it is absolutely vital that industry and Government partner together to build on the Foresight report which set out a road map for the future of manufacturing . In order for that to happen we must invest in technology and encourage its uptake throughout the supply chain. By doing this we can be at the forefront of the ‘great technology race’ - which in turn will result in greater inward investment for UK PLC.”