While environmental issues seem to have dropped down the agenda of the mainstream media somewhat, the recent landmark deal reached by EU leaders to cut green house gas emissions by 40%, compared with 1990 levels, by 2030 is a stark reminder that subject is never far from prominence

Reported to be a compromise between member states that wish to instil greater emissions cuts and those that rely heavily on coal, the binding deal includes increasing the use of renewable energy to 27% of the total energy mix. Little wonder then, that the renewables sector continues to be very important to the UK economy, with almost £8bn invested in renewable energy in the UK last year alone.

As an island nation, tidal energy is particularly pertinent to the UK. One company specialising in developing innovative hydrokinetic turbines to generate 'green' energy from the motion of the sea is Tidal Energy Limited (TEL). When TEL needed a way of accurately measuring the power produced by its scale-model prototypes, equipment from Sensor Technology provided a convenient and dependable solution where other methods had failed.

When it came to measuring the power produced by turbines, TEL needed to be able to measure both the rotational speed of the turbine shaft and the torque being transmitted by the shaft. While the speed measurement was straightforward, measuring the torque accurately was more of a challenge. After searching the market for a cost-effective product that would meet its needs, TEL found the RWT410/420 series of TorqSense rotary torque sensors from Sensor Technology.

The innovative sensors are available in three different body sizes and six different shaft sizes, covering torque measurements from 1 to 13,000Nm, which made it easy for TEL to choose a sensor that exactly met its requirements. 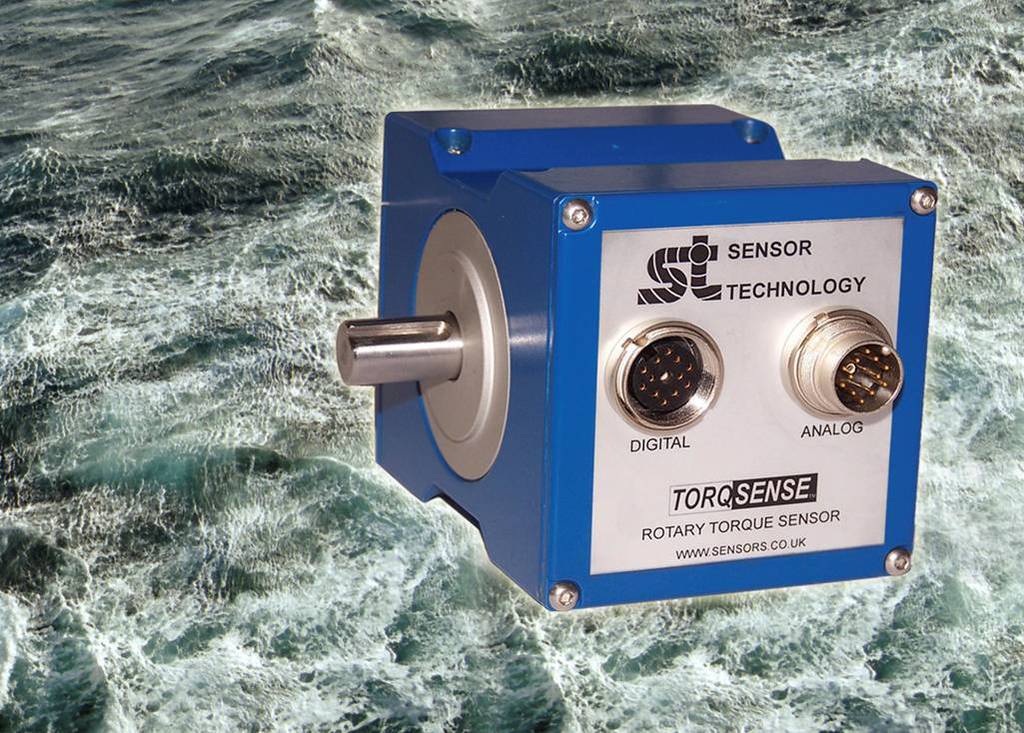 Like all of the sensors in the TorqSense range, the RWT410/420 series uses novel sensing technology that depends for its operation on surface acoustic wave (SAW) transducers. These transducers comprise two thin metal electrodes, in the form of interlocking "fingers", on a piezoelectric substrate such as quartz. When an RF signal of the correct frequency is applied to the transducer, surface acoustic waves are set up, and the transducer behaves as a resonant circuit.

Since the transducers operate at radio frequencies, it is easy to couple signals to them wirelessly. Hence, TorqSense sensors that incorporate the SAW transducer technology can be used on rotating shafts, and can provide data continuously without the need for the inherently unreliable brushes and slip rings that are often found in traditional torque measurement systems.

In a deal indicative of the importance of the sector, a number of leading wave energy firms have joined forces with Bosch Rexroth in a bid to create a standardised, self-contained offshore electricity generator for the wave industry.

The project tackles head-on one of the biggest challenges in wave energy – how to generate electricity reliably and cost effectively at sea – and has the potential to "transform the wave industry in the same way the internal combustion engine made the motor car possible," according to Aquamarine Power chief executive officer, Martin McAdam. 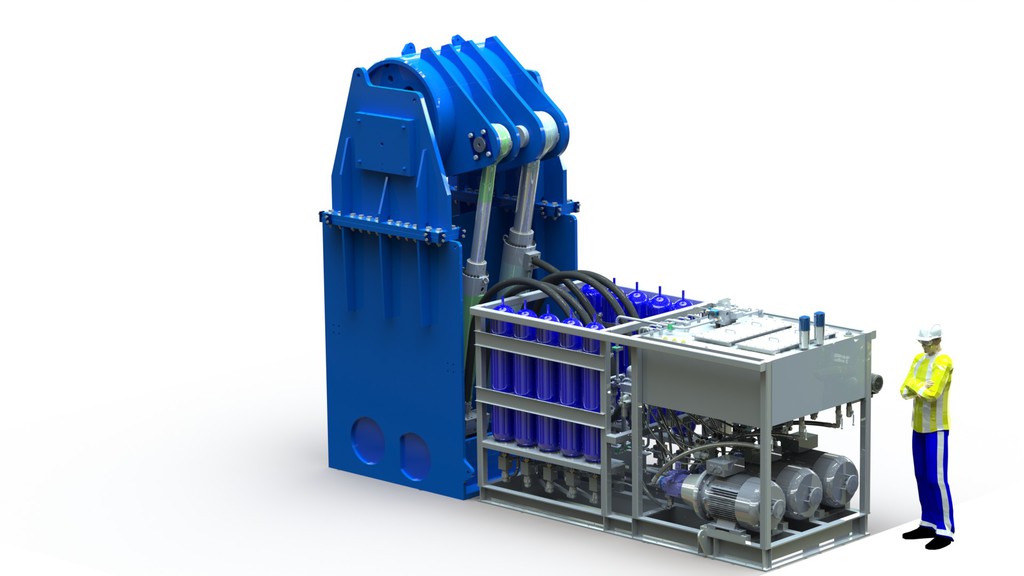 The WavePOD (Wave Power Offtake Device) will provide a commercial solution for the problem most wave energy developers face in transforming linear motion into electrical energy. It comprises an offshore hydraulic generator housed in a sealed nacelle which generates electrical power which is then cabled back to shore.

Bosch Rexroth and Aquamarine Power have already made significant progress with the project and are developing a tenth-scale prototype to be tested at the world-leading Institute for Fluid Power Drives and Controls (IFAS) at Aachen University, Germany.

Creating a way of converting kinetic energy into electricity is essential

Commenting on the project Louis Verdegem, ocean technology specialist at Bosch Rexroth, said: "Creating a way of converting kinetic energy into electricity is essential if we are to effectively harness the power of waves. Currently however, cost effective transformation of the captured energy into electricity remains beyond the industry’s grasp. This is due in part to the fragmented nature of current research and development, which is largely commissioned by individual manufacturers. Through this collaboration we expect the use of standardised components and system architectures to accelerate learning and propel the industry forward.”

Wind turbines are installed in a wide variety of climatic conditions, both onshore and offshore, which means operating temperatures expected of a wind turbine can range from -30 deg C in Arctic regions to +60 deg C in sub-tropical climates. Depending on the location, the installation is exposed to varying levels of ozone, UV light, sand, dust and salt water. Therefore, in order to ensure maximum availability of a wind turbine, robust, durable bearings are required.

According to Dr Steve Lacey, engineering manager at Schaeffler UK, the varied and often extreme loads on a wind turbine require a carefully matched combination of bearing design, lubrication and bearing sealing. This means that a packaged solution for each bearing position is required, which is optimally matched to the specific application.

The Wind Energy Business Unit at Schaeffler offers a combination of unique rolling bearing know-how with comprehensive systems knowledge of wind turbines, built up over more than 30 years as both a supplier and development partner.

With assistance from a network of high performance seal suppliers, bearing seals are now being developed that represent the optimum combination in terms of functional performance, service life and cost.

Application development engineers at Schaeffler ensure that the specific details of each customer installation are considered. For example, the change in the seal gap of the rotor bearing arrangement in a 3MW installation can be calculated using design calculation software.

In addition to other parameters, the gap dimensions determined for various load cases form the basis of calculating the optimum design of a bearing seal.

Elastomer materials such as HNBR offer outstanding resistance to ozone, debris and ageing

Rotary shaft seals are the preferred choice for sealing the rotor bearing. The integrated, corrosion-resistant steel spring in the sealing element ensures effective sealing over a long operating period. An additional dust lip can be added to provide even greater protection from ambient media. Under the operating conditions, elastomer materials such as HNBR offer outstanding resistance to ozone, debris and ageing.

The flexible, fabric-reinforced, outer part of the rotary shaft seal enables easy mounting and dismounting. The sealing rings can be replaced easily by simply cutting and bonding into place using a special adhesive set during onsite mounting. Moulded, single-piece rotary shaft seals can now be produced with shaft diameters up to 3000mm.

For blade and tower bearings, double lip type profiled seals are most effective. The inner seal lip retains the lubricant within the bearing, while the outer seal lip prevents the ingress of ambient media.

Compared to the rotor bearing design, seals for blade and tower bearings undergo lower sliding speeds and so are subjected to only minimal thermal strain. In this case, NBR elastomer fulfils the requirements with respect to ozone, debris and ageing resistance over long operating periods.

Both facilities create steam, which drives a turbine thus producing electric power. One plant employs flat panels (heliostats) to bundle the sun’s rays and send them to a central unit, the power tower. The second uses parabolic glasses that direct the sun’s energy into a pipeline where thermal fluid is heated. The two new solar projects – a parabolic trough with a 100MW capacity and a solar tower type plant with a 50MW capacity – will combine to generate a combined capacity of 150 MW as well as reduce carbon dioxide emissions by an estimated 500,000 tons per year.

To ensure the system works to its maximum capacity, the solar panels must be angled to the sun by a tracking system. This system, incorporated in each panel and meticulously controlled by a central programmable logic controller (PLC) is of key importance for the overall plant performance. It must be very precise – otherwise the energy yield will be below the optimum level. It also has to work reliably under extreme conditions, i.e. in heavy wind and dust. Equally demanding is the fact that the drives must make a huge number of very small movements in intervals of seconds rather than minutes.

When Hine Renovables designed the power packs for the solar projects, it looked to incorporate high-quality, cost-effective components. As a global supplier of hydraulic products, Eaton was selected to provide Hine with valves and hoses to complement its solar design.

Eaton provided roughly 80,000 valves of various types including the DG series valve, counterbalance valves and cartridge valves, which were mainly produced in Great Britain and Eaton spiral and braided hydraulic hose. Finally, for tube fittings and connectors, Eaton provided Hine Renovables with its WALPro solutions from the Walterscheid system.

Phoenix Contact now offers monitoring software for photovoltaic systems. PV Monitor+ is designed for systems up to 500 KW and to interact with standardised and robust industrial components from Phoenix Contact. No programming knowledge is required in order to operate a monitoring system with the software. The system operator is automatically notified in the event of an error and can react promptly, in order to secure the yields of the photovoltaic system for the long term. 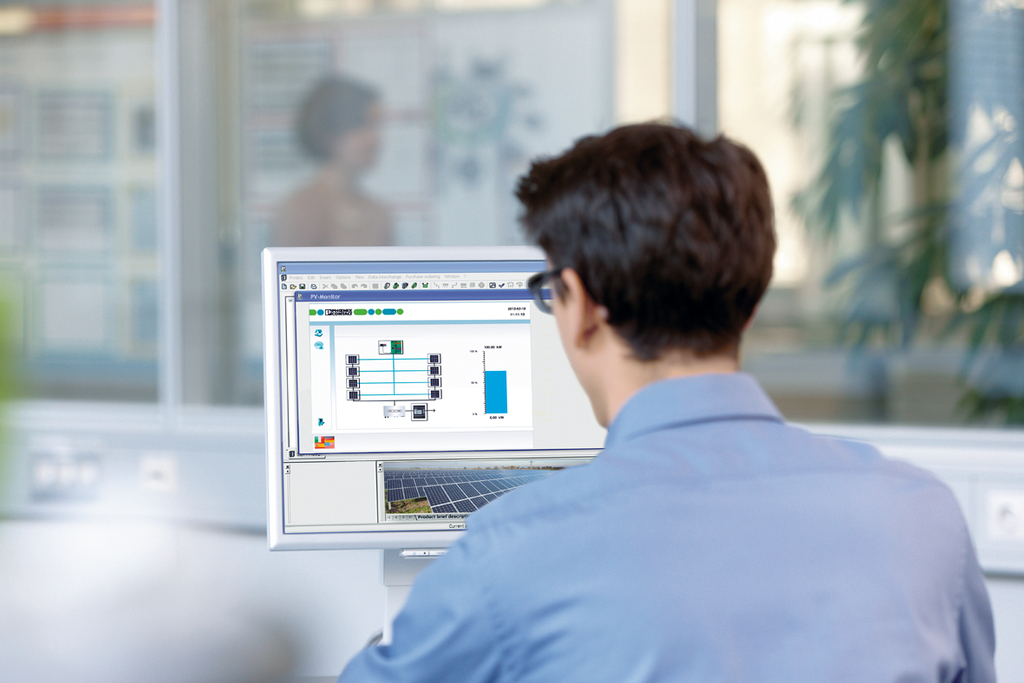 The most recent voltages and currents of the photovoltaic systems are recorded using suitable measuring modules and are transmitted to a communication module. From there, the measured data is transmitted to a pre-programmed, modular small-scale controller where this data is continually evaluated. If the string currents deviate from an adjustable measure set by the user via the web interface, an alarm in the form of an SMS is sent to the system operator.

The monitoring system can be individually adapted to the size of the system, thanks to the PV Monitor+ software. After installing the hardware, parameterising the controller is necessary. This takes place via an Ethernet connection, for example from the computer.