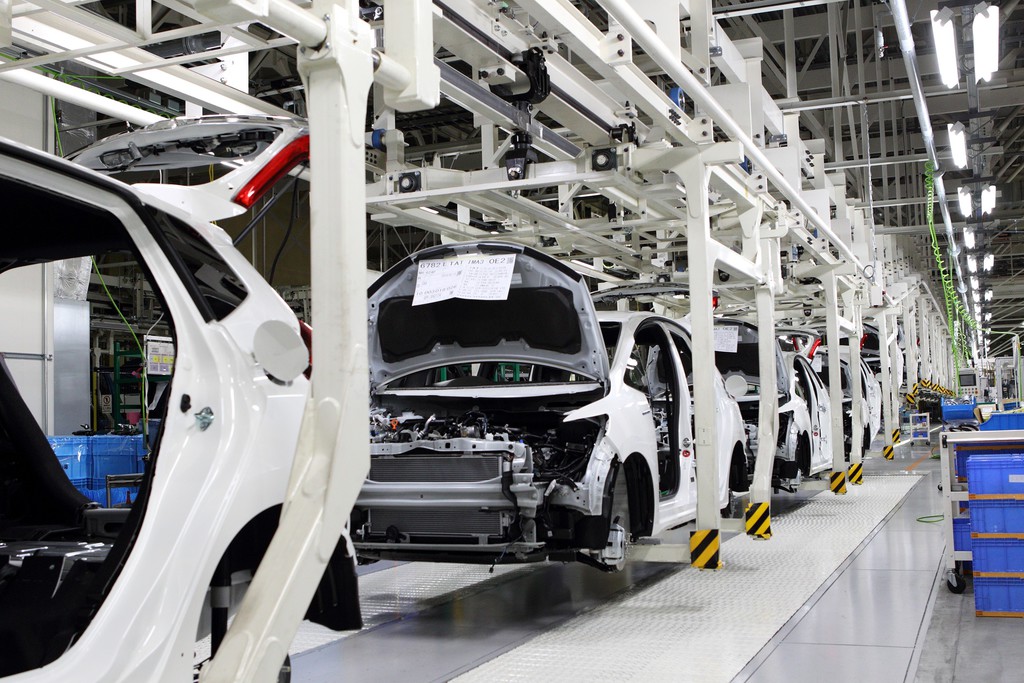 The Yorii Plant of Honda Motor Co Ltd opened in July 2013. Since then, it has continued to be at the cutting edge of the vehicle production industry, introducing everything Honda has developed in the way of high-level production technology and high-efficiency production systems.

The rate of new cars sold within Japan has plateaued at around 5 million per year for the last several years, and the industry can no longer count on the consistently rising sales figures of the past. The Yorii Plant was built with a view to increasing cost-competitiveness through highly efficient production and energy management. The huge site, which covers 0.95km2 including greenbelts, is scheduled for a full production capacity of 250,000 vehicles per year.

The first issue which arose when constructing a control network for the vehicle body assembly line was how to handle the overall network architecture. "We did consider a flat construction linking the whole Yorii plant in a single network, but given the possibility that a single failure could stop the entire plant’s network, we decided we were better off with multiple networks,” commented Yokomukai.

However, constructing individual networks by application would not only mean a more complex system but increased introduction and operation costs. Additionally, from the perspective of spreading know-how from the Yorii 'mother factory' to other factories, something not only sturdy but simple in construction was called for.

Something not only sturdy but simple in construction was called for

While considering the system architecture, the team also identified two functions essential for the network. One was the centralised 'visualisation' of FA control devices; the vehicle body assembly line alone uses dozens of PLCs, making individual management inefficient. The target was an environment in which FA control device setup, monitoring, failure detection and so on could be centralised through the network.

The other essential function was the communication of 'safety signals'. When a worker enters a prohibited area or approaches a robot, safety considerations mandate a sensor for detection and a production facility stop (interlock). However, the traditional practice of using relays to configure a hardware based safety circuit presented the issue of serious time loss during line expansions and changes. Given this situation, they decided to incorporate safety signals into the network as well, aiming for a structure that would allow flexible line changes.

"When Mitsubishi Electric introduced its CC-Link Field Network to us, I discovered that it could handle maintenance and safety information as well, reflecting our various on-site needs. I felt that it would allow us to build a simple and high-reliability network suitable for our cutting-edge Yorii Plant," observed Yokomukai.

Furthermore, compatibility with FA control devices was also an important point. "In order to fulfill the projected production numbers, the vehicle body assembly line was going to have to be maintained at a near constant 100% operating rate, requiring reliability and guaranteed performance from the FA control devices. So when we were selecting FA control devices for the Yorii Plant’s vehicle body assembly line, our in-house proposal was for Mitsubishi Electric’s products, which had proven themselves over many years at our Sayama plant (Japan), and which I myself have always held in high regard. Because the CC-Link IE Field Network is highly compatible with Mitsubishi Electric’s control devices, we felt that we could construct an optimal system by combining the two,” explained Yokomukai.

The CC-Link IE Field Network is an Ethernet based field network following the physical and data layers as defined by IEEE 802.3 (1000BASE-T). Through the work of its industry group, the CC-Link Partner Association, it has become widely adopted and considered a standard. As well as covering high-speed I/O and control of distributed controllers, it offers flexible network topology options such as star and ring types, allowing great freedom in the arrangement and configuration of connected devices. In addition, not only does it support management (setup and monitor) and maintenance (monitoring and failure detection) of controller devices, but it also features a "safety communication function” allowing sharing of safety information among multiple safety PLCs.

The Honda Yorii Plant began operation in July 2013, and moved to full operation with the introduction of a second shift in September 2013. Yokomukai is pleased: "We really get a sense of the effect of the "visualization” that we were aiming for originally, even the way that when there’s trouble with the equipment or FA control devices, the diagnostic functions of CC-Link IE Field help us locate the problem faster. Also, we’re extremely satisfied with Mitsubishi Electric’s responsiveness, regarding system construction and support.”

Through this introduction of CC-Link IE Field Network, a centralised visualisation of FA control devices has been achieved, just as required in the original plan. "The vehicle body assembly line uses as many as 50 Mitsubishi Electric PLCs: we’re able to get a centralised overview of the line status or any trouble that may be happening when a necessary signal isn’t being received, making operation management efficiency much, much higher. The recovery time has also been shortened,” remarked Yokomukai.

With regard to line expansion and safety information, it is as simple as connecting a LAN cable to a vacant port on the CC-Link IE Field Network and the interlock can be added immediately in Mitsubishi Electric’s Safety PLC, reducing the workload considerably.

Honda has assessed these merits highly in-house, and introduced a similar system to its new Mexico plant, which began operation in January 2014. The Yorii Plant has proved its value as the mother factory.

The market conditions surrounding the automobile industry have undergone major changes. New car sales are struggling in developed countries, while major growth is predicted for markets in the developing countries, as each automobile manufacturer is competing for dominance. Increased competitive ability through increased efficiency is a constant concern for manufacturers, and Honda plans to work towards further increased efficiency while utilizing the Yorii Plant as its mother factory. Mitsubishi Electric expects higher demands to be placed on integrated FA solutions as users construct future leading-edge production systems.