Robots get touchy with smart skin

Endowing robots and prosthetics with a human-like sense of touch could dramatically advance these technologies. Smart synthetic skins have the potential to allow robots to touch and sense what's around them, but keeping them powered up and highly sensitive at low cost has been a challenge

Toward this goal, scientists have come up with various smart skins to layer onto devices. But boosting their sensitivity has involved increasing the numbers of electrodes, depending on the size of the skin. This leads to a rise in costs. Other systems require external batteries and wires to operate, which adds to their bulk.

Now scientists are reporting a self-powered, transparent smart skin that is simpler and less costly than previous versions. Haixia Zhang and colleagues have fabricated a smart skin that is self-powered by its frictional contact with the objects that it touches. Triboelectric charges occur anywhere two objects touch each other, although these charges are so small that they often go overlooked. When a honeybee crawls across the smart skin, the skin not only senses the insect, it also uses the spontaneous triboelectric charge that builds up between the honeybee and the smart skin to power its sensing ability, eliminating the need for batteries. The smart skin could have applications for robots, artificial intelligence systems, and bionic limbs for amputees.

This self-powering method is possible because the smart skin consumes very little energy in the first place. Most other previously developed smart skins are digital, meaning their resolution sensitivity is determined by a grid of pixels. Increasing the resolution usually requires increasing the number of pixels and electrodes.

In contrast, the new smart skin uses an analogue method that requires only four electrodes. The electrodes are positioned at four opposite ends of the smart skin. When an object, such as a finger, applies a pressure to the smart skin, it generates a current through the skin that induces a voltage on each electrode. Since the distance between the applied force and each electrode is different, the voltage at each electrode will also be different, and the relative voltages can be used to pinpoint the location of the applied force. The smart skin is made from ultra-thin plastic films and demonstrates electrical stability, maintaining the same level of output over 30,000 cycles.

Components with highly sensitive surfaces are used in automotive, semiconductor, display and optical technologies. During production, these parts have to be handled repeatedly by pick-and-place processes. The proprietary Gecomer principle reduces the risk of surface contamination with residues, and of mechanical damage due to gripping.

Researchers at the Leibniz Institute for New Materials (INM) have improved the adhesive force in their Gecomer structures up to 20kg/25cm2. This conforms to the weight of 40 tablets handled with a surface half-postcard size. Within these new findings, it will be possible to use the same gripper for heavy and lightweight, sensitive devices. Even slightly rough surfaces can be handled reliably. The researchers presented their results at the Hannover Fair.

"Artificially produced microscopic pillars, so-called gecko structures, adhere to various items. By manipulating these pillars, the adhesion can be switched on and off. Thus, items can be lifted and released quickly and precisely," Karsten Moh from INM explains. “Our new materials add a new dimension to the handling of heavy devices which are sensitive, even in vacuum."

The development group is now focussing on gripping of objects with non-planar surfaces. Additionally, new triggers for switching the adhesion are being explored. 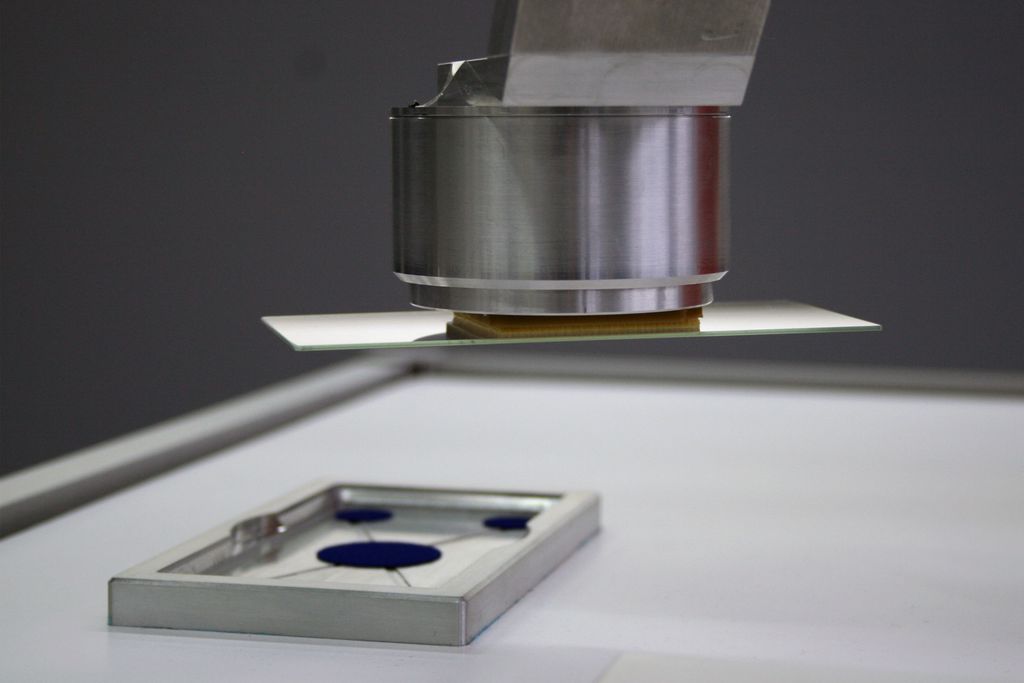