Key trends in the automotive sector include emissions, driver safety, manufacturing efficiency and cyber security. Andy Pye looks at the latest developments in these key areas

According to the European Commission, cars are responsible for around 12% of the EU’s total CO2 emissions. By 2021, phased in from 2020, the fleet average to be achieved by all new passenger cars is 95g/km of CO2, which is a 40% reduction in comparison with the 2007 fleet average of 158.7g/km. This demands a fuel consumption of around 4.1 l/100km of petrol or 3.6 l/100km of diesel. If the average CO2 emissions of a fleet exceeds its limit value, the manufacturer will have to pay an excess emissions premium for each car registered, at a cost of €95 from the first gram of exceedance onwards. Hence, vehicle lightweighting is one of the automotive industry’s most prevalent trends. It is estimated that every 100kg of reduced vehicle weight can save 8g/km of CO2.

With such a daunting target looming, it’s clear that automotive manufacturers will need to continually reduce the mass of their vehicles. This is why recent years have witnessed a major shift in body materials from conventional steel to aluminium. To help facilitate this step-change, customised pre-treatment and coatings from Henkel are providing for both improved corrosion protection and enhanced process efficiency. 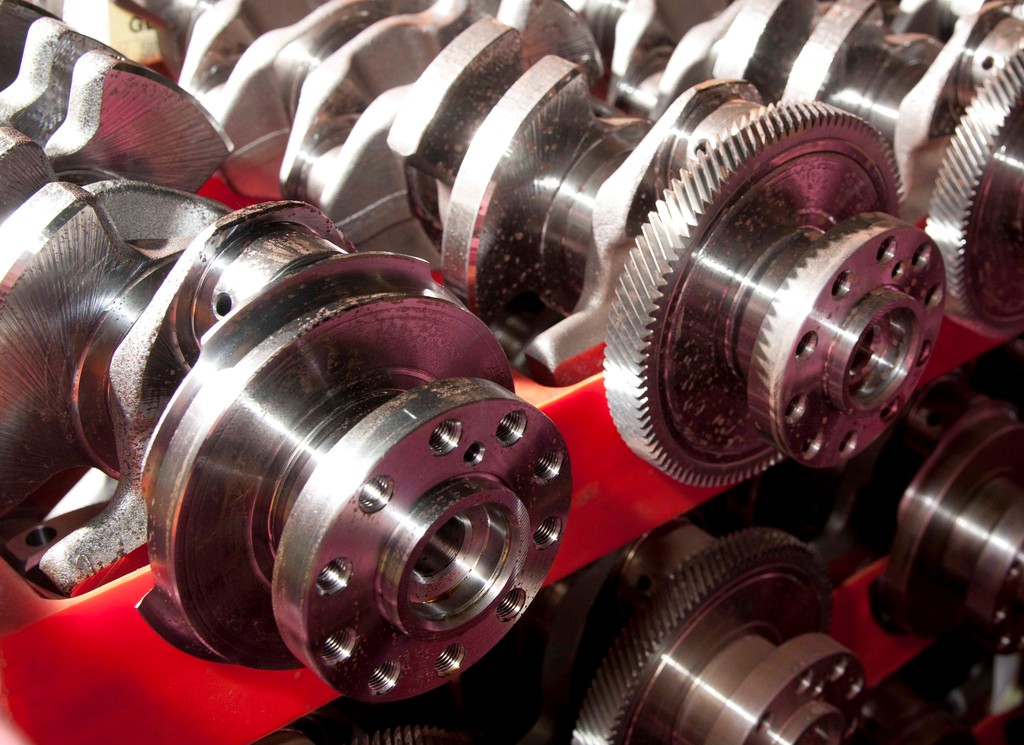 In chassis applications, for example, BONDERITE MN-T 1800, a zirconium-based product, is already replacing traditional zinc phosphate at many auto plants. Used for processing car bodies through pre-treatment systems prior to painting, the product is having a significant role in lightweighting initiatives. This is because MN-T 1800 requires fewer process steps and a shorter contact time (with very little process control changes) than traditional zinc, thus leading to significantly increased production rates. Furthermore, there are no heavy metals and the process runs at room temperature – minimising energy consumption. Over eight million vehicles on the road are already using this technology.

Debuting at the Geneva Motor Show in March, the MY2017 Opel/Vauxhall Insignia Grand Sport featured the Twinster, a torque-vectoring all-wheel-drive system supplied by GKN. This represents the first application of this technology in a mass-market, D-segment vehicle. GKN currently deploys the system in the MkIII Ford Focus RS, a specialist performance model with a low production volume (4000 units were initially allocated for sale in the UK). 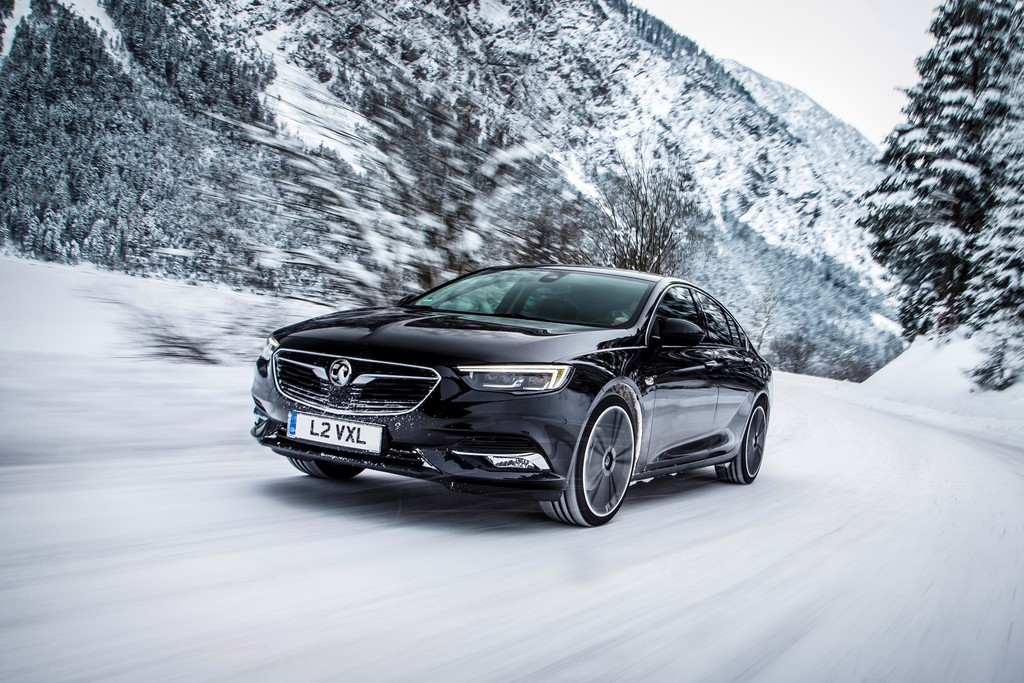 Figures from the European Automobile Manufacturers Association (ACEA) show a steady increase in take-up of All-Wheel Drive (AWD) since 1990, now totalling 13% of market share. This European trend is closely matched by figures for the UK. While a large portion of the ACEA figure can be attributed to the explosion in popularity of Sport Utility Vehicles, the trend towards AWD is also noted in manufacturers increasingly offering AWD variants of their range of conventional passenger cars.

The Focus RS was the first road-going AWD version of the best-selling hatchback, a major collaborative project between Ford and GKN to adapt the front-wheel-drive platform, utilising a Power Transfer Unit (PTU) to deliver torque to the rear wheels in cornering events. By driving the rear wheels faster than the front, and the outside wheel faster than the inside, the yaw moment can be increased, tightening the turning trajectory.

Torque vectoring has its origins in the Japanese auto industry,

Torque vectoring has its origins in the Japanese auto industry, with Mitsubishi developing its Active Yaw Control system in a successful attempt to gain a competitive edge in the World Rally Championship. 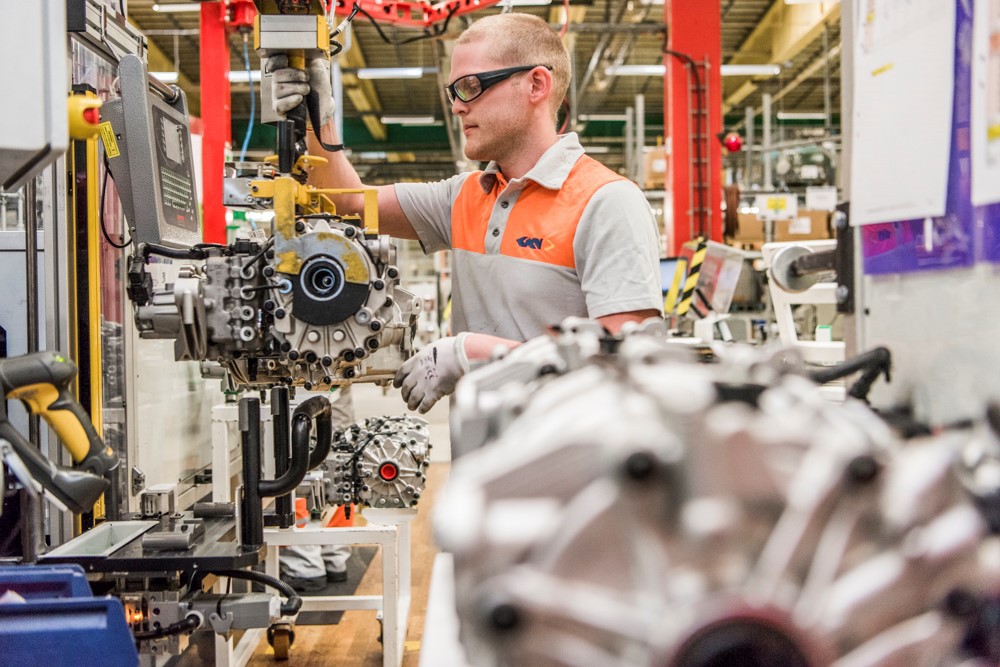 The basic principles of torque vectoring serve to enhance the function of a vehicle differential, by splitting the available torque unevenly between the four wheels, improving steering response; however, intelligent intervention is required to improve lateral dynamic stability and prevent unintended consequences, such as wheel spin and locking. A torque vectoring system requires the ability to monitor vehicle conditions – driver inputs and available traction at each wheel – and respond by distributing torque to maintain predictable handling characteristics. This is particularly important in low-grip driving conditions, such as in winter driving, where one side of the car may encounter a patch of ice, provoking a sudden loss of traction.

In the Focus, the GKN system can direct up to 70% of available torque to the rear axle, of which up to 100% can be diverted to a single wheel. If the system detects a loss of grip, power delivery can be redistributed to optimise stability, and to prevent the tractive wheel from receiving too much power as with an open differential.

WABCO is to supply a major German passenger car maker with its breakthrough electric Twin Compressor air suspension technology, and plans to equip all of the customer’s premium electric sport utility vehicles (SUVs) in global series production starting in late 2018. 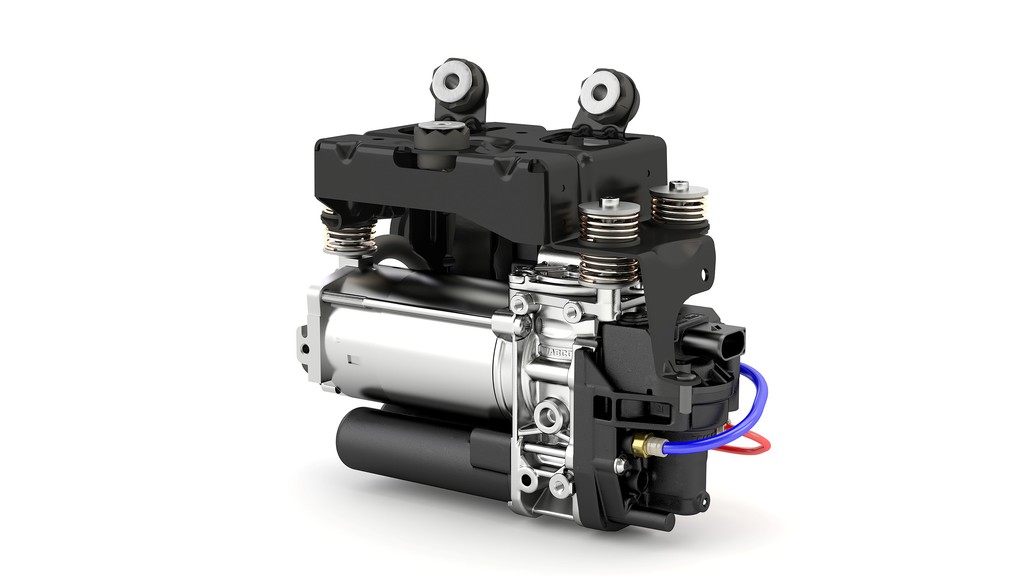 This innovative high-performance air supply system increases rate of airflow by 40% and by augmenting maximum air pressure up to 15%, alongside improved acoustic performance. WABCO’s compressors also start electronically, rather than electro-mechanically, which softly reduces the starting electric current by 50%.

According to the Society of Motor Manufacturers and Traders (SMMT), reshoring of vehicle component production is worth an estimated £6bn. In four years, the number of components sourced through the UK automotive supply chain for the average UK-built vehicle has increased by 4%, reaching 41% in 2015.  Among the components moulded in the UK are exhausts, radiators and cooling systems, while plastic injection moulded components, trim interiors, vehicle upholstery, forgings and stampings are the most sought after UK-produced items. Of all the components required for vehicle assembly, industry experts claim that close to 80% could in theory be produced by UK suppliers.

reshoring of vehicle component production is worth an estimated £6bn 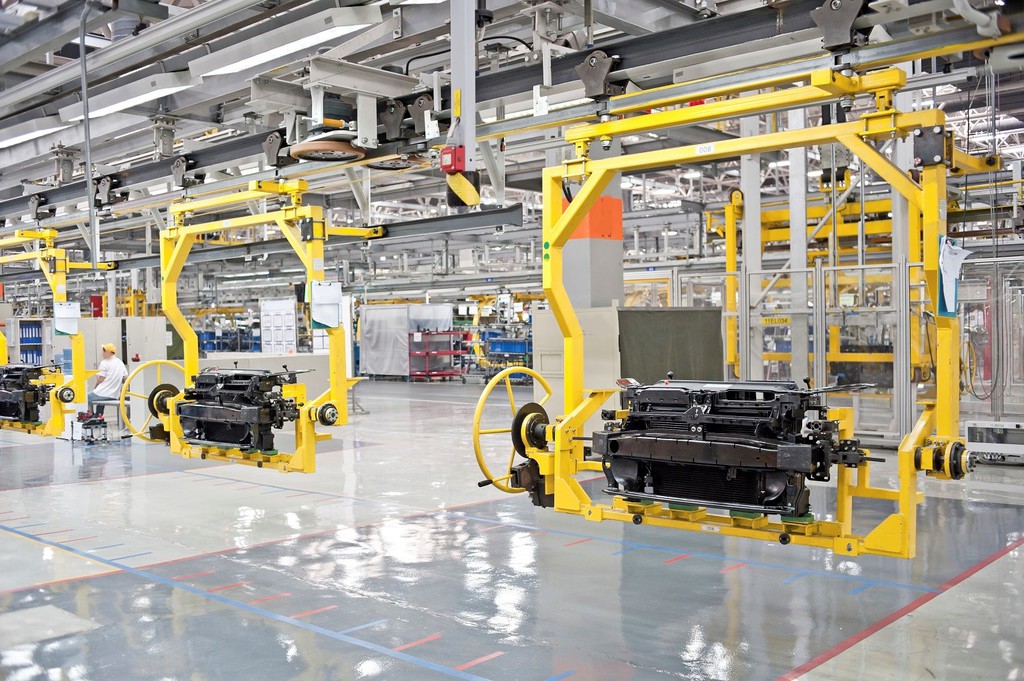 “Britain’s automotive sector is one of our strongest manufacturing success stories,” notes Nigel Flowers, MD of Sumitomo (SHI) Demag UK. In the past five years, the number of British-built cars has risen from 36% to 41% and this is certainly opening up the UK injection moulding market to new trade opportunities. “There has been a definite trend among OEMs and vehicle makers to switch their procurement to domestic suppliers as it reduces supply chain risk and lead time and cuts the cost of transport logistics,” Flowers adds.

Sumitomo (SHI) Demag has unveiled its new all-electric IntElect injection moulding machine. Designed with automotive trade moulders in mind, it is 20% smaller than its predecessors and gives manufacturers of vehicle components the precision required to expand their production in the growing £6bn UK supply chain sector.
Available in two performance categories - standard and ‘top-tech’ - the new IntElect range features a 500kN model and closes the price and performance gap between hydraulic and all-electric injection moulding machines. The standard model is designed for applications previously run on hydraulic machines, for example the moulding of mass-produced automotive components.

While, the ‘top tech’ option caters to even more challenging dynamic and precision applications, such as the moulding of medical components. Included within the standard package is fast clamp speed; high force high-speed and controlled ejector technology for the removal of components from the mould; an injection speed of 300 to 350mm per second; fast nozzle movements; cycle analysis; and a below 7s cycle time.

“Because automotive plants are predominantly automated, assembly robots are not tolerant to variables or even the smallest defects, and this is driving the automotive supply chain towards precision moulding. Furthermore, all-electric machines, like the IntElect, are more efficient if working with more complex materials or reducing the weight of components,” Flowers says.

Production has started on Nissan’s new extra-large press at its manufacturing plant in Sunderland. The £37 million pound project has taken just over 18 months to complete, since ground was broken mid-way through 2015. Once at full capacity, it will be capable of stamping 2.5 million panels a year with a force in excess of 5,200 tonnes.

An official ceremony was held at the new facility, which also celebrated the milestone of nine million cars built at the plant since production began in 1986. Nissan's Divisional Vice President, European Manufacturing, Kevin Fitzpatrick, said: “The new press is a fantastic piece of cutting edge technology which sets up the next generation of production at Nissan Sunderland Plant. Reaching nine million cars is also a tremendous achievement for the plant. The vehicles we make have come a long way from the first Nissan Bluebird to roll off the line.” 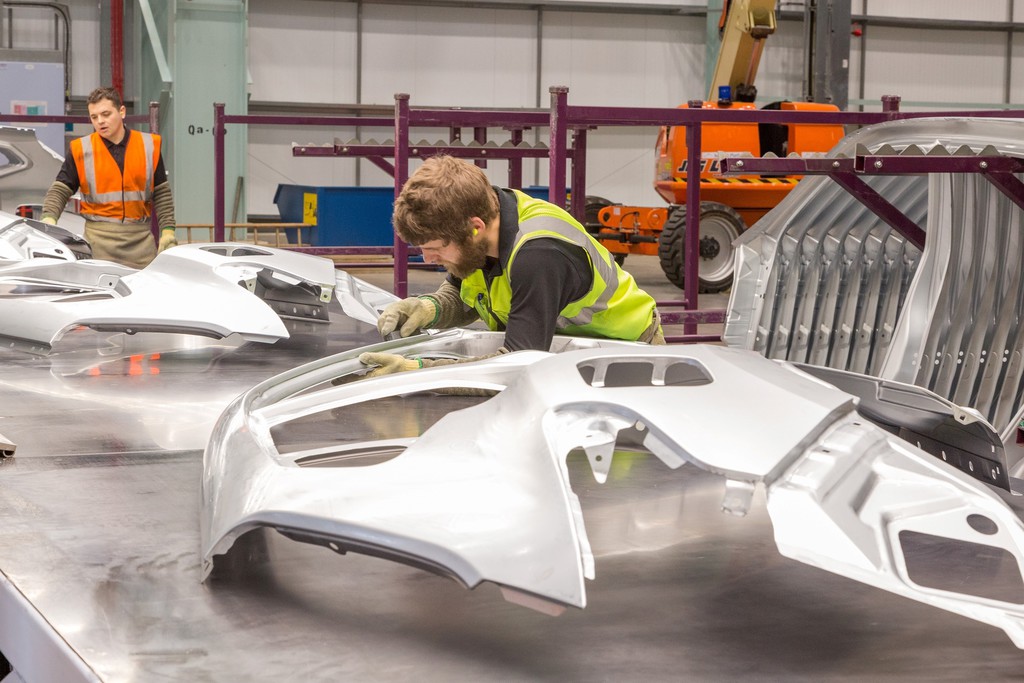 More than 10m high, with foundations deeper than 6.5m, the giant facility will press body sides and other panels for vehicles built in Sunderland, including the leading crossovers Qashqai and Juke, the Nissan LEAF, the world’s best-selling electric vehicle, and the two Infiniti models, Q30 and QX30.

The new press line and panel storage area required a building extension totalling 6,780m², taking the total built up space on site above 362,000m², the equivalent of more than 50 football pitches.

The new XL press, the first of its type in the Renault-Nissan Alliance, will be the biggest at Sunderland and joins the existing seven press lines.

In addition to the company’s £3bn annual injection into the British economy through suppliers, services and wages, the new press forms part of the £650m ongoing investment in new facilities and future models in Sunderland which has taken the total capital investment by Nissan in the plant since it opened to beyond £4bn.

Wokingham-based Maypole Engineering has specified the use of Grob Linear Chain technology from R.A. Rodriguez on a bespoke engine marriage system for a premier automotive OEM based in the south of England. The purpose-designed system features two tables, each of which is lifted and lowered using a Grob LinearChain SK35-90 with 35kN lifting force and 2000mm stroke length. 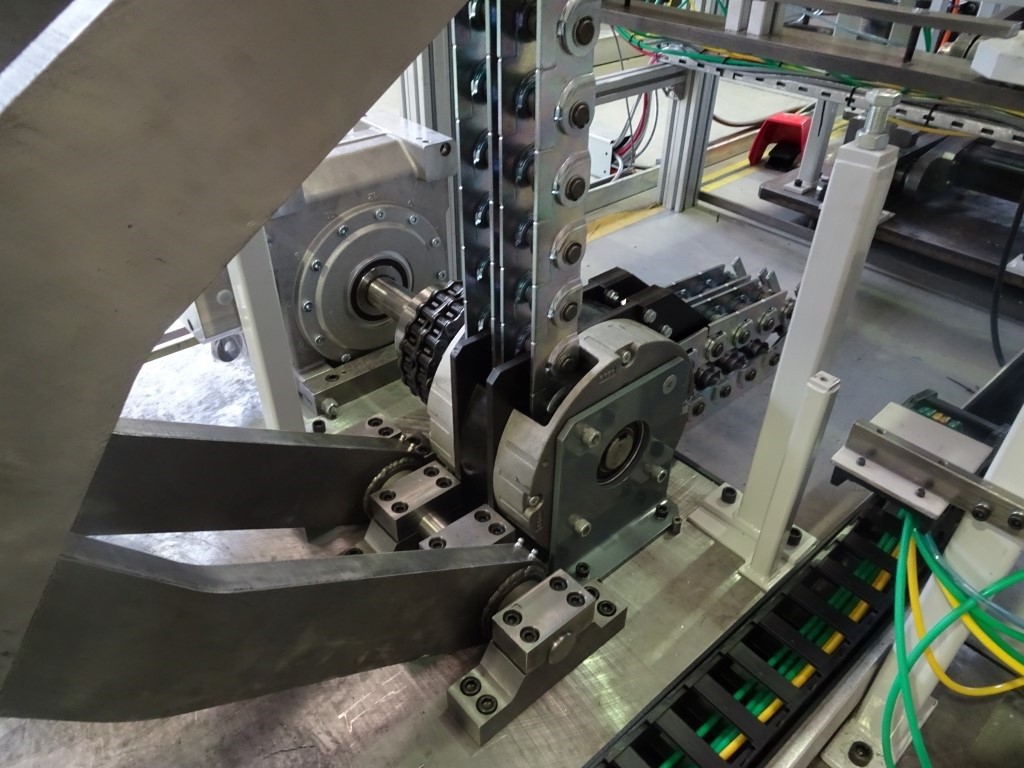 “In terms of sequence, the first table lifts and engages its pallet with a front end engine assembly from the plant’s monorail system,” explains Chris Hudson, Technical Sales Engineer at Maypole Engineering. “The table is then lowered and the engine transferred to the second table via a conveyor. The second table is then raised up from where two line workers guide the engine into the car and secure it in place using nut-runners. While this is taking place, the empty pallet returns to the first table via a second conveyor.”

Grob LinearChain features a special profile with interlocking fingers that permits it to become a rigid thrust device for pushing a guided load, such as on a linear slide or a rail. A major advantage of using a push-pull chain to move a load is that it can be stored compactly.

“The beauty of using Grob LinearChain is its ability to collapse back into its own magazine,” confirms Hudson. “Compare this with the stroke of a conventional actuator, for example, and you need to accommodate not just the length of the cylinder, but its extended stroke too. Using Grob LinearChain makes for a far more compact solution.”

Rodriguez can offer Grob LinearChain stroke lengths up to 30m with a maximum push force of up to 35,000kN. The device provides high positioning accuracy, constant stroke speed and shock-free motion with no elastic hysteresis under load. 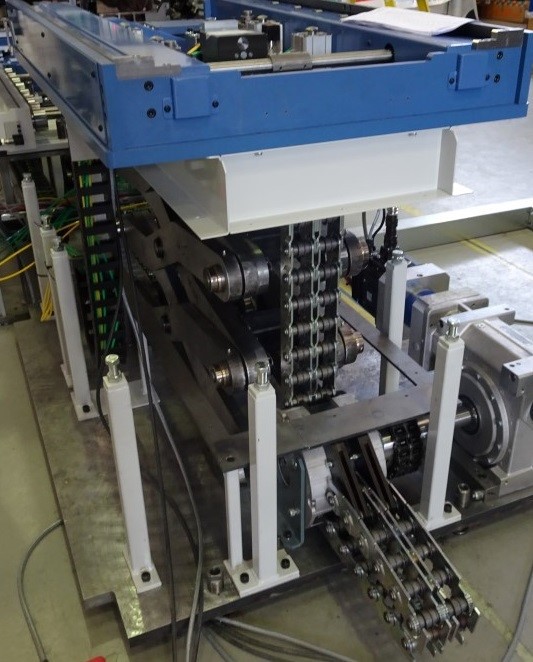