The monitoring of servo brakes is a sensitive issue, especially if the brakes are integrated into the systems or are very small. Up to now, they have been considered unmonitorable in these cases – a real challenge in times of Industry 4.0 and a growing need for data from the machine 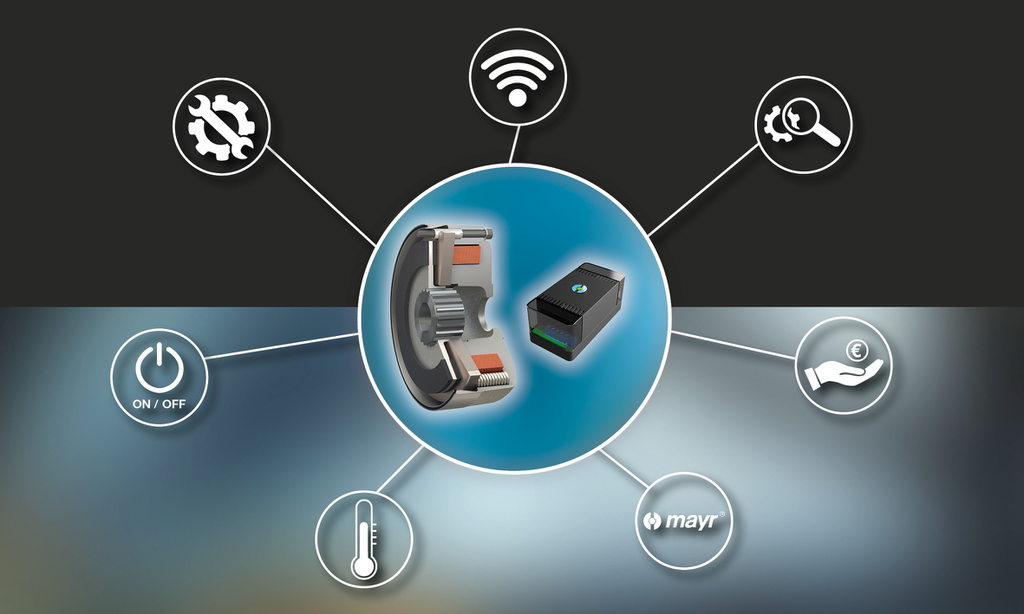 Servo drives are the standard today in many areas, such as for example in machine tools or robots. In other branches such as wind power, they are being used more and more frequently and are replacing the drive variants that have been common in these fields to date. The design of the servo systems is essentially always the same: Control electronics, often a gearbox and the motor with a safety brake. In the industry, systems are common in which the brake is already integrated, i.e. installed together with the other components in one housing. This installation situation involves specific challenges. Firstly, the temperature: In a servo motor, the temperature can reach up to 120°C. In order to function safely and reliably even in this high temperature range, all brake components must be designed for such temperatures. Spring-applied electromagnetic brakes such as the ROBA-servostop have proven themselves here.

However, the integrated brakes have one weakness: Previously, they were considered unmonitorable, as it was not possible to use switches or sensors due to the installation situation, the operating temperatures and the extremely small air gaps. This is a concern in view of the increasing networking of machines - keyword Industry 4.0. Of course, the control and regulation electronics of the servo system provide data that also allow conclusions to be drawn regarding the state of the overall system. But the safety brake itself remains silent. Even though in closed systems data from the brake would also be very helpful and would enable, for example, predictive maintenance.

mayr power transmission offers exactly these possibilities with its intelligent ROBA-brake-checker module. It works without sensors. Instead, it detects the movement of the armature disk by analysing current and voltage, and knows what condition the brake is in.

In addition to the switching condition, temperature and wear, it monitors the tension path or tensile force reserve, i.e. whether the magnet is still able to attract the armature disk. On reaching the tensile force reserve, the ROBA-brake-checker emits a warning signal early enough so that a certain operating time for the brake is still possible. In a further expansion stage, the module can also be integrated into a remote maintenance system via a suitable interface. This further reduces service times and costs.

If damage should occur nevertheless, the ROBA-brake-checker provides users with significantly better analysis options. With previous solutions, such as contactless release monitoring, users are only able to see the failure and the destruction pattern. They do not know, however, why the error occurred. Using the ROBA-brake-checker, on the other hand, progressions are made visible and error analyses can be used and even transferred onto other systems owned by a user. All this data from malfunctions and normal operation thus supply valuable input for future improvements and optimizations.

An additional advantage of sensorless monitoring is the absence of mechanical components. In contrast to conventional switches, nothing can be adjusted or damaged by external physical influences. Tolerances due to deviations in the manufacture of components, fluctuating temperatures during operation or incorrect installation also do not influence the monitoring and the data supplied. The ROBA-brake-checker detects progressions and characteristics instead of exact trigger points. This makes monitoring with the module extremely reliable and provides considerably more informative data. In the "plus" version, the module simultaneously also supplies the brake, thus replacing the rectifier. This means that the supply and monitoring functions for the brake are combined in one device. The module is a plug-and-play solution, i.e. it is supplied ready for installation and with completely tested values.

Selecting the right brake for servo systems depends on several factors. Ideally, the brake concept takes all the factors, which are decisive for safety and reliability, into account. These factors include first of all reliable mechanics which function independently of temperatures and external influences. Secondly, the selection of the friction lining material plays an important role in ensuring a consistently high braking torque throughout the entire service lifetime, even in emergency stop situations. New, intelligent monitoring technology completes the concept and makes even integrated or very small servo brakes fit for the networked machine of the future.