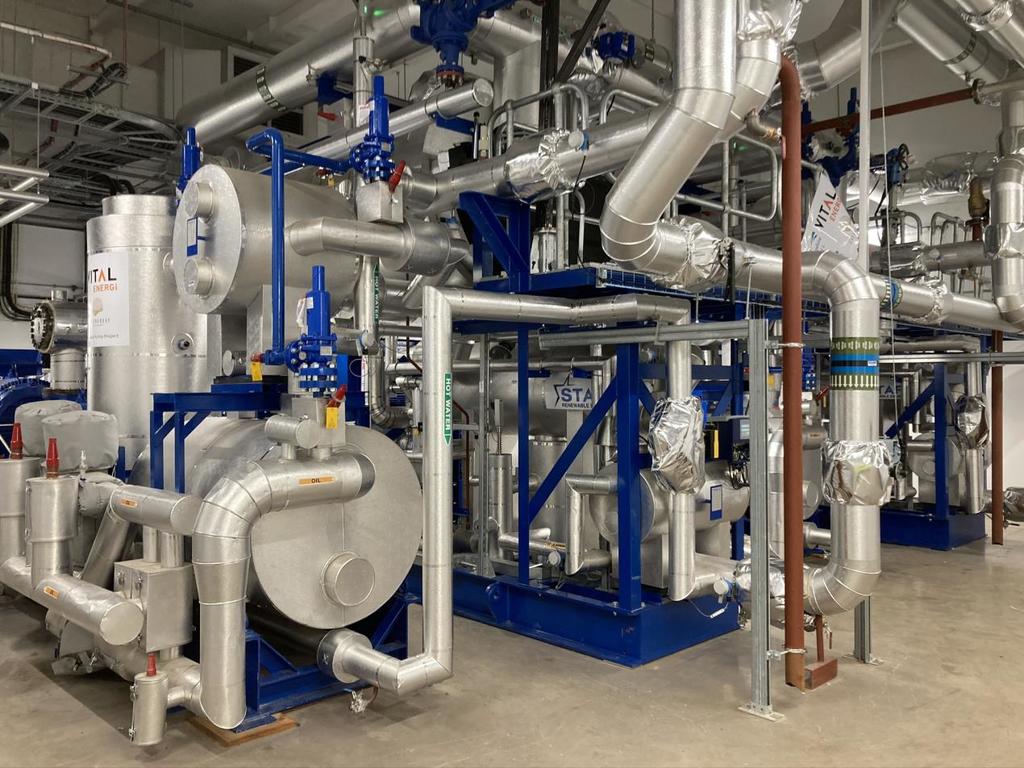 The District Heating Network is the first and largest high temperature (80 degrees Celsius) water source heat pump (WSHP) system in the UK. The scheme puts Queens Quay in Clydebank at the forefront of the race to Net Zero as a place to live and work. The WSHP works by extracting water from the River Clyde to generate heat for buildings on the site of the former John Brown Shipyard, now known as Queens Quay. The site is being developed by West Dunbartonshire Council and delivered by main contractor Vital Energi. With Scotland's electrical grid amongst the lowest CO2 intensities in the world, this regularly sees heating available with over 90% fewer CO2 emissions than burning gas. Added benefits include zero local NOx emissions, which are increasingly recognised as a key factor in poor health.

The two, 2.65 MW WSHPs are designed, manufactured and installed by Star Refrigeration in Glasgow and are part of the company's Neatpump range. The renewable energy heat pump extracts heat from the river's water by compressing the ammonia refrigerant in a high efficiency screw compressor. ABB's motors and drives are used to power the ammonia compressors, each rated at 836 kW. Applying variable speed control makes it possible to increase screw compressor capacity by over-speeding up to 60 Hz. The compression process raises the water's temperature before releasing the heat via a heat exchanger, to a district heating loop at up to 80 degrees Celsius. Pumping water through a network of underground pipes provides heating for several hundred homes and businesses in Queens Quay.

Dave Pearson, group sustainable development Director for Star Refrigeration, says: “Harnessing heat from a river is quite easy. We simply utilise the thermodynamic principles used in fridges but with a focus on the heat produced. Where the hard work comes, is doing this with the minimal amount of energy input from the electric motors.

"ABB supported our extensive analysis of dozens of data points to ensure we had the maximum flexibility, control and efficiency. This will be even more important when we modulate demand for electricity to help balance the grid; offloading in times of under generation and increasing demand to reduce the amount of wasted generation known as curtailment.

"The ABB solution is a key part of this grid balancing opportunity. The really great thing about this heat pump is that we can deliver around six times as much heat as if the electricity was converted into hydrogen for combustion. No one should squander scarce resources.”

Most usefully, the VSDs reduce the starting current. Low harmonic VSDs were chosen to minimise harmonic interference on the mains supply. The VSDs exceed the requirements of EN 61000-3-12 and IEEE519 and offer genuine unity power factor with no compensation needed, thereby avoiding reactive power penalties. The standalone design of the VSD gives it a small footprint, minimizing space requirements in the control panel.