The first of three “pod” vehicles has been unveiled in Milton Keynes as part of the Transport Systems Catapult’s pioneering project to trial automated vehicles in pedestrianised areas. 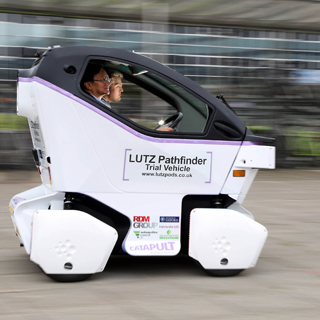 The electric-powered LUTZ Pathfinder pod was presented to commuters and other members of the public outside Milton Keynes Central train station, with members of the Transport Systems Catapult project team on hand to answer questions.

The event marked the completion of the first project vehicle by Coventry-based manufacturers RDM Group. Afterwards, the two-seater pod was delivered to Oxford University’s Mobile Robotics Group (MRG) to begin the installation of the pod’s autonomous control system (ACS).

Following  installation work, the pod will undergo a series of calibration tests at a private test track before returning to Milton Keynes for the start of the public trials. At that stage, the pods will be the first fully automated vehicles to be trialled on public pedestrianised areas in the UK.

"This is a very exciting day for everybody involved in the LUTZ Pathfinder project, because it signals the completion of the manufacturing phase and the effective start of the autonomous technology trial,” said Transport Systems Catapult CEO Steve Yianni.

"When you consider that there wasn’t even a design in place for this vehicle less than 18 months ago, it has been a really quick turnaround to now have our first research vehicle ready to start work, and this has only been possible as a result of our successful collaboration with RDM, MRG and Milton Keynes Council.”

Once the ACS has been installed, the public trials will get underway in Milton Keynes, with the pods being driven initially in manual mode – allowing them to map and ‘learn’ their environment. They will then begin to operate in autonomous mode, but with a trained operator still remaining in each pod, ready to take back control of the vehicle if necessary. The pods will have a maximum capable speed of 15 mph (24km/h) but will be limited electronically depending upon the environment they are travelling in (for example, moving more slowly in congested areas).

"Safety has been our paramount concern throughout the planning process, which is why we will continue to have a human operator at the wheel for the duration of the trial,” Mr Yianni added. "But the LUTZ Pathfinder project is an important first step towards a future where self-driving vehicles can be called up on demand, as and when people need them.”

David Keene, RDM Group CEO said: "Today represents an exciting stage for the LUTZ Pathfinder project and is a key milestone for RDM. We continue to develop our autonomous pod platform which has worldwide applications within many transportation sectors. The project is enabling the autonomous vehicles to be tested and evaluated in their intended environment”

Professor Paul Newman of Oxford’s MRG said: "We are now very much looking forward to further developing, deploying and then testing our ‘Mercury’ autonomy system on this vehicle. This is an important and exciting stage in this project which will then enable us to test the technology’s potential in the public trials.”

The arrival of the first pod was also welcomed by Pete Marland, leader of Milton Keynes Council, who said: "It is fantastic that Milton Keynes is at the forefront of this global technology race, and seeing them on the streets will be amazing.

"Our aim is to show that they can work as a means of public transport, with people being able to use their smartphones to order a pod, so it makes sense that the commuters at Milton Keynes Central are the first to see the pods. Having the pods here today is one step closer to having them as part of everyday life in MK.”

Findings from the LUTZ Pathfinder project will also be used to support the larger-scale UK Autodrive programme which is set to trial a fleet of 40 self-driving pods, as well as "regular” road-based cars, in Milton Keynes and Coventry.