From mass processing to artisan breweries, the huge scope of the food and beverage sector means that not only are there great benefits to be reaped from the adoption of automation, but also that the associated technology comes in many shapes and forms

According to new research from Barclays, investing an additional £1.2bn in manufacturing processes to increase robotics and automation over the next decade could add as much as £60.5bn to the UK economy; equivalent to nearly two fifths of the manufacturing sector’s value to the economy today.

The ‘Future-proofing UK manufacturing’ report reveals that investing in automation technology will help to increase the international competitiveness of the UK’s manufacturing sector through increased manufacturing productivity and efficiency. As a result of additional investment, the manufacturing sector will be worth £191bn in 2025, £8.6bn more than currently projected and a 19.6% increase on today.

Furthermore, increased investment in automation will help to soften the expected long-term decline in manufacturing sector jobs by safeguarding 73,500 additional workers in 2025, due to the creation of a larger, more productive and competitive UK manufacturing sector.

In addition, 32,300 more jobs will be supported elsewhere in the economy through the generation of more business in the supply chain, from raw materials through to logistics, as well as the effect of workers spending more widely in the economy. In 2025 alone this is forecast to represent an additional stimulus worth £3.9bn.
The report found that, along with the pharmaceutical sector, food manufacturing industries have the most to gain from further investments in automation with the research showing a more than 10% increase in output between 2016-2020 and close to a 25% rise between 2020-2025. This will be driven by the sector’s comparatively large existing base in terms of size and take up of automation technology, and by the relative ease of application of automation technology.

Although it might be the food processing industry that springs to mind in relation to the adoption of automation, the technology is also making inroads into the fresh food sector - particularly as pre-prepared salad, vegetables and fruit continue to remain a popular choice for time-poor consumers. Addressing this market, among the most recent innovations from Pacepacker is a range of fully integrated turnkey systems that can be interlocked into existing lines and specifically address the issue of fresh produce wastage.

With a footprint equivalent to existing rotary table operations, the FlexaPac system comprises two parallel conveyor belts that transport bags of fruit from a packing machine onto a set of landing platforms. Here, once the correct quantity of netted or bagged product has been recognised by the system, they are gently pushed onto a set of lowering plates, which smoothly releases the product into the waiting tray below – completely eliminating damage and waste. Without human handling, the system evenly distributes layers of either netted or bagged fruit, below the level of the tray bale arms or carton lips, until the required quantity is met. 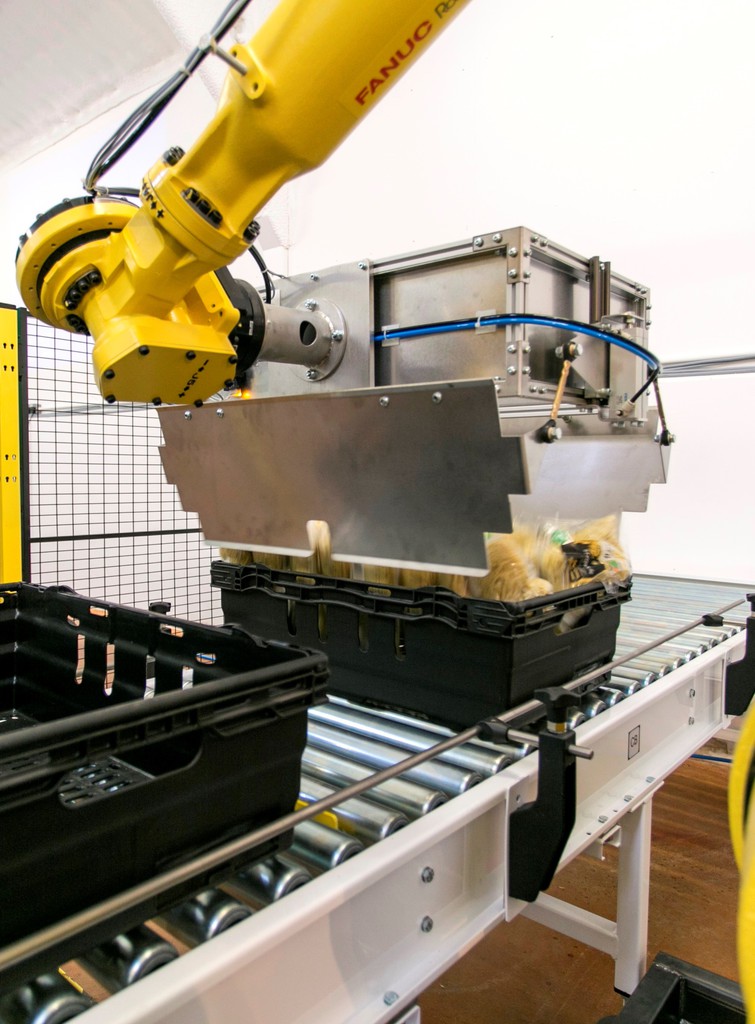 Upright stacking means that products maintain their freshness for longer

The STL’s bespoke end effector smoothly adjusts its position to catch fresh produce packs as they shoot off the end of a conveyor, stacking packs on top of each other. Once full, the robot arm then tilts the end effector into a horizontal position above a waiting full or half-sized crate, releasing the entire product collection uniformly into the tray. Upright stacking means that products maintain their freshness for longer and are more visually appealing to consumers. In addition, more packs can be fitted into each tray, reducing supply chain and distribution costs.

Built to a compact footprint, the STL also features a multi-tasking pack diverter to count and index packs, while the tray denester separates the stacks of crates for filling, pushing them along the conveyor to the shingle packing operation. Up to 20 half trays per line per minute can be processed, ensuring no packing bottlenecks. 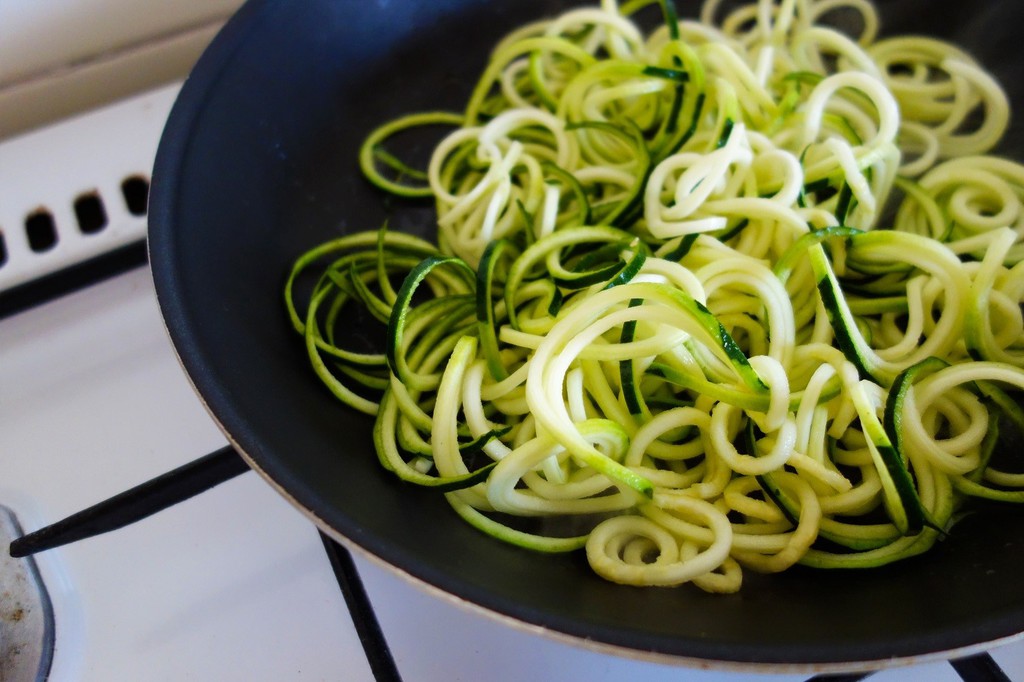 When it comes to implementing new technology, perhaps more than any other sector, the huge variety of substances to be handled and their relative characteristics mean that a ‘one-size-fits-all’ solution in food and drink is going to be highly unlikely. For example, high quality edible olive oils pose challenges for food handling equipment manufacturers to create efficient filling and bottling machines for olive oil suppliers. As a viscous medium for pumping, olive oil is prone to oxidation and filming as a result of frothing from excessive mechanical action.

The difficulties have meant that many oil producers have previously had to pour olive oil into containers by hand, but recent development has enabled the use of complete pumping and bottling systems. One of these systems has been developed by FoodTech BV, a machine and system manufacturer and parts supplier from the Netherlands using level sensors and pressure sensors from SICK to ensure that the bottling system runs smoothly. 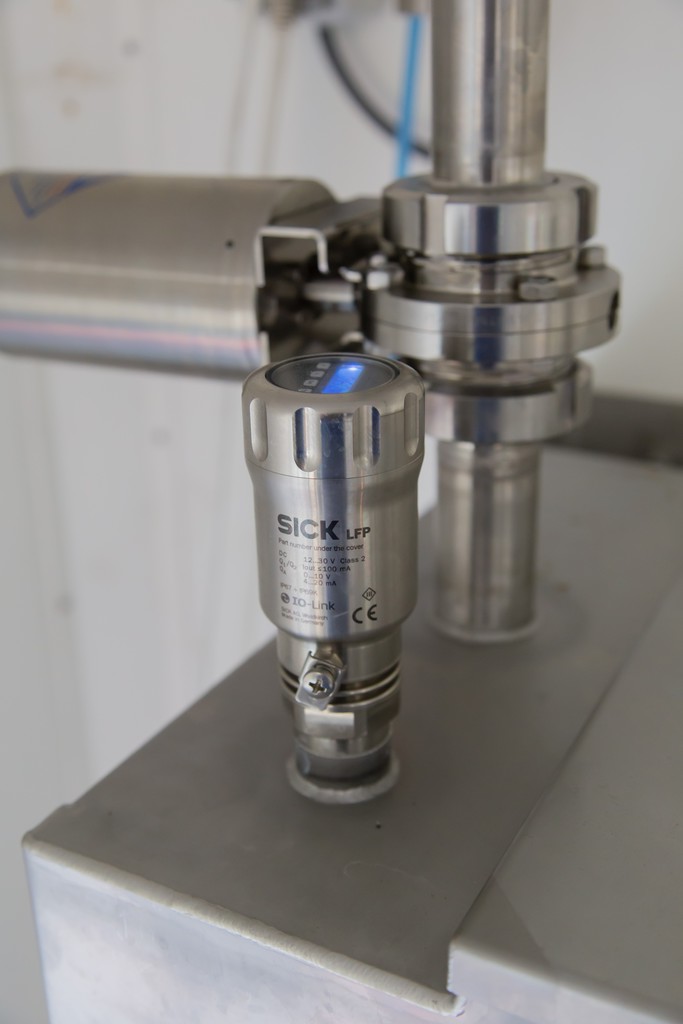 The automated solution for bottling and packaging olive oil has been designed for a retailer specializing in dried tomatoes, olives and olive oil. FoodTech BV’s CEO Wim Reede comments: “For this customer, we developed and constructed a pumping system which fills containers with olive oil automatically. Previously, they filled an average of 250 containers per day by hand, but now our customer can produce thousands of 25 ml containers every day.”

Reede explains how the system works: “The olive oil is supplied in large, white Intermediate Bulk Containers (IBC) and pumped into a larger stainless steel tank. Next, the oil is gravity conveyed through pipes from this tank into the two buffer tanks of the bottling system. Finally, the bottling system fills the individual containers with exactly the right amount of olive oil.”

SICK sensors monitor the pressure in the pump and the pipes. According to Wim Reede, it is vitally important that the pressure in the pump and the pipes is always kept at the correct level: “As soon as the pressure drops due to air bubbles from frothing, there is a risk that olive oil could accumulate on the inner surfaces. It then becomes a rubber-like film in consistency, make cleaning extremely difficult. Thanks to SICK, we can monitor this perfectly. The TDR level sensor LFP Inox checks whether there is still a sufficient amount of oil in the stainless steel tank. If this drops below a certain level, which might risk air entrapment, more is pumped from the IBC tank.  The pipe pressure is monitored by the SICK PBS pressure sensor. This means that potential faults are detected immediately.”

The SICK LFP Inox level fluid probes use guided wave radar technology to offer highly accurate level detection and measurement in in difficult applications such as oil- and water-based fluids even in the presence of foam. The LFP’s measuring performance is unaffected by the density or conductivity of the fluid, making it consistently accurate even for deposit-forming and foaming liquids, and ideal for olive  or other food grade oil applications. 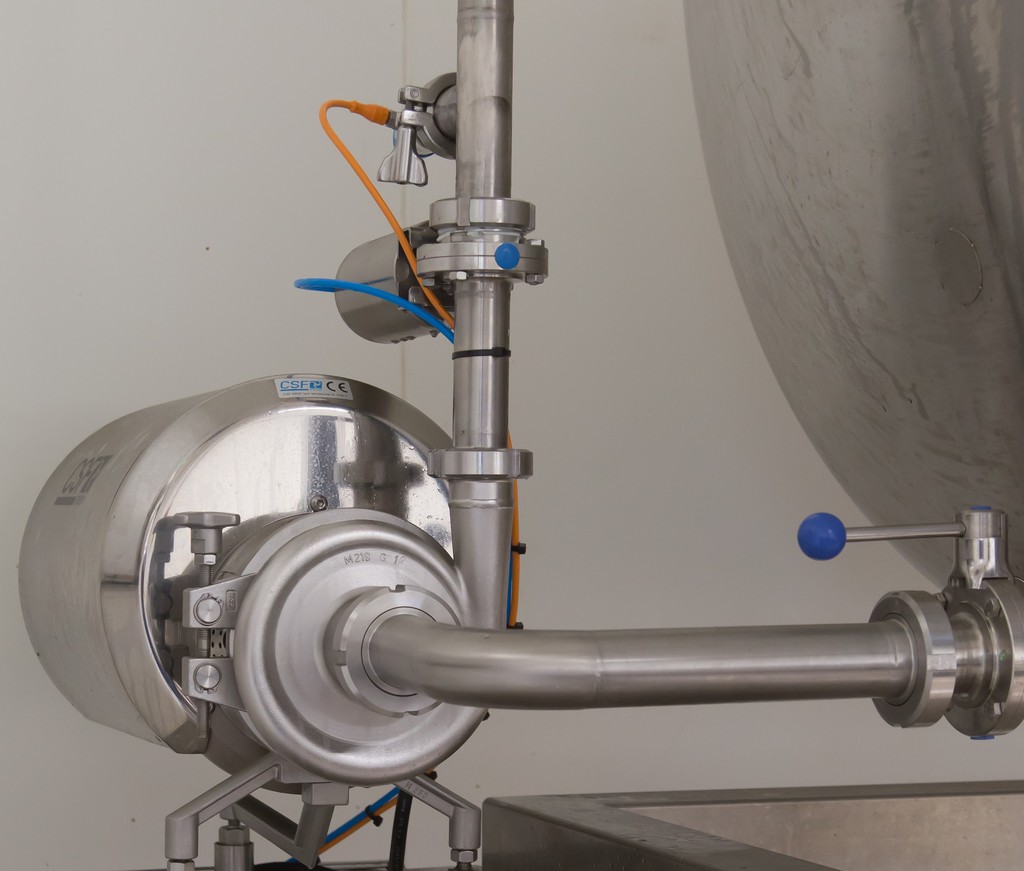 The SICK PBS pressure sensor is a hygienically-graded pressure switch with all wetted parts in stainless steel 1.4435, a flush-mounted, highly resistant stainless steel membrane and hygienic process connections suitable for CIP and SIP. With a large LED display for easy pressure value reading, it features individually programmable switching outputs and analog output, with an IO-Link for remote monitoring.

Swiss confectioner Suteria Chocolata has been producing its famous Solothurner Torte for a century. Never wavering from its original recipe, several years ago the company enlisted the help of a new pasty chef – a compact Fanuc LR Mate. tThe robot was recruited to work half-day shifts, not due to performance limitations, but in order to keep what is produced fresh. 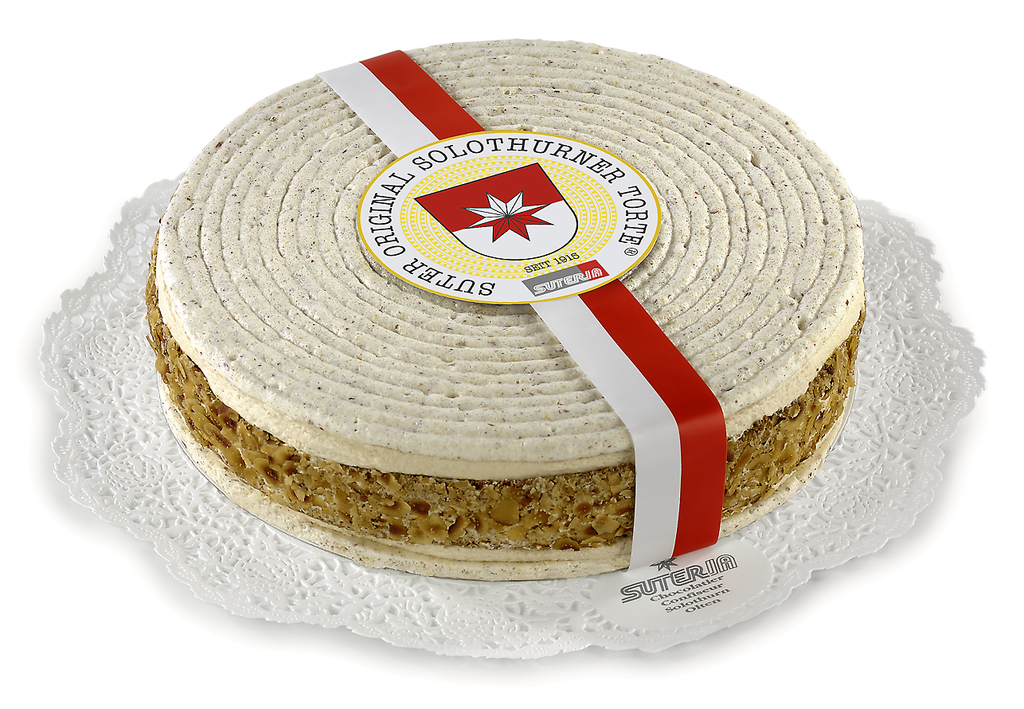 Sales orders determine the quantity produced and only before major holidays does the robot put in extra shifts. The robot completes the intricate yet monotonous task of piping perfectly sized hazelnut meringue rounds, which decorate the top and bottom of each torte.

Donning a white apron like his pastry colleagues, the robot, which has a reach of approx. 700mm and a payload of 5kg, sets to work piping the meringue mixture from an injection nozzle in a circular motion direct onto baking trays. An operative fills the dispensing unit, provides a stack of trays, selects the appropriate size on a touchscreen, leaving the robot to create the unique meringue bases and decorative top. 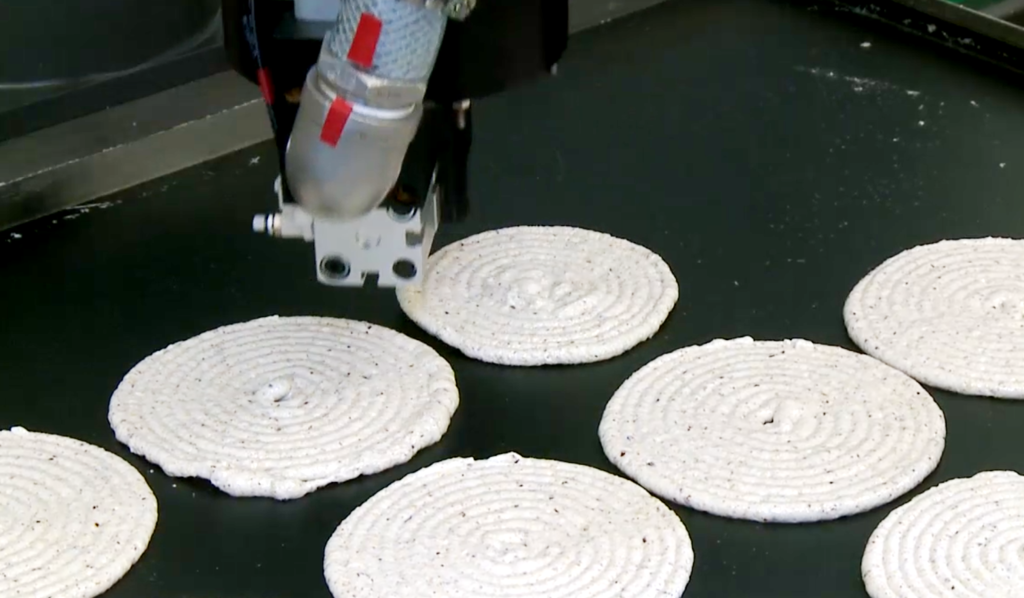 The fragile nature of the meringue mixture means that it can’t be processed at high pressure and where air bubbles form it can lead to flaws, so operatives occasionally need to step in and take corrective measures. When each baking tray is full, it is removed from the cell by an operative and placed into the oven where it is baked always at the same low temperature. An empty tray is then pulled from a stack into the robot cell.

"If you can combine the traditional craftsmanship with the use of the robot, yet still remain unique with your product, then there are compelling reasons to automate," comments Suteria Chocolata CEO Michael Brüderli.

“This FANUC robot is the technical epitome of a human arm and also an ideal helper in food production. There are many work steps within a bakery that can be automated or at least mechanised," claims the chef, who completed his apprenticeship and professional training at the bakery. “There were no preconceived ideas about the deployment. The role that this robot plays in finishing the cake may be modest, yet the rationale for its use is truly a classic scenario. It completes a monotonous and, what's more, extremely tedious task,” he adds.

For many, introducing robotics is a way to achieve increased output, yet for Brüderli, the rationale to automate has always been about maintaining the company’s renowned and consistently high quality. "We earned our reputation through a traditional craft. That will always stay the same. Even with global expansion, we will only produce our original Solothurner Torte exclusively at our Solothurn bakery. Where the robot has no influence on quality, but can relieve and assist us in the workflow, we are delighted to put it to use.”

SEW Eurodrive has supplied an energy efficient drive solution to leading drinks manufacturer, Radnor Hills, that has helped make a new bottling line possible. The new line will enable the company to increase production from 175 million to around 300 million bottles a year, as part of a planned expansion program to meet growing demand for its products. 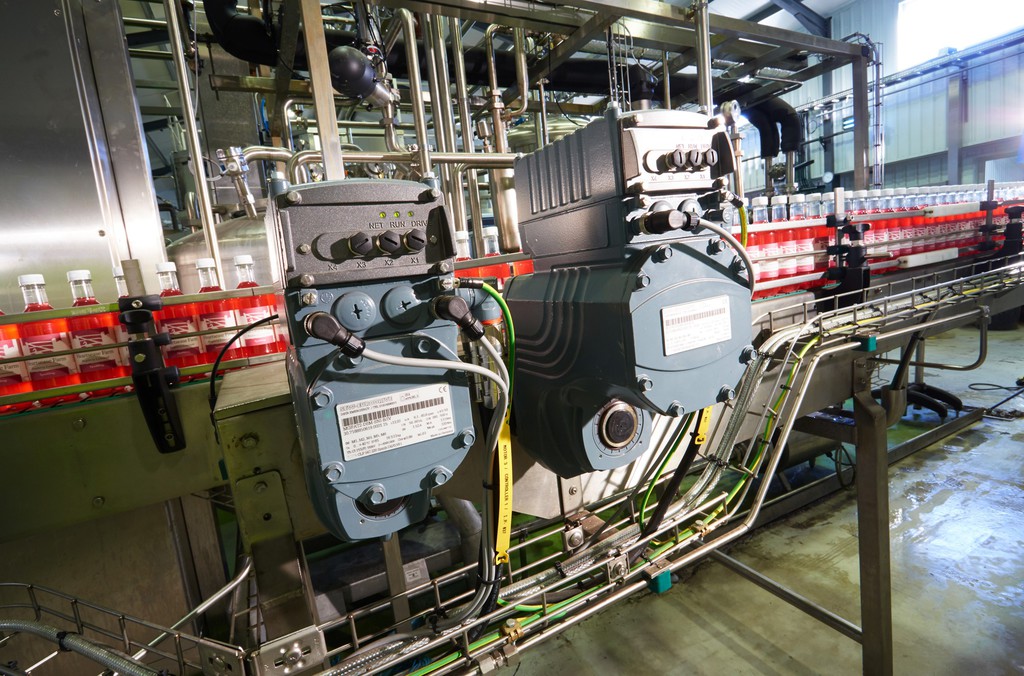 Plans to install a new bottling line, capable of handling 22,000 bottles an hour, along with a PET bottle blow moulding machine would have taken energy consumption beyond currently available limits using traditional drive technology. The innovative solution was designed by factory automation engineers Newberry Systems, which worked closely with SEW Eurodrive to utilise the company's energy efficient decentralised mechatronic drive solution Movigear. It was calculated that the high energy efficiency of Movigear would cut power consumption significantly, keeping it well within available limits, and allow the project to go ahead. 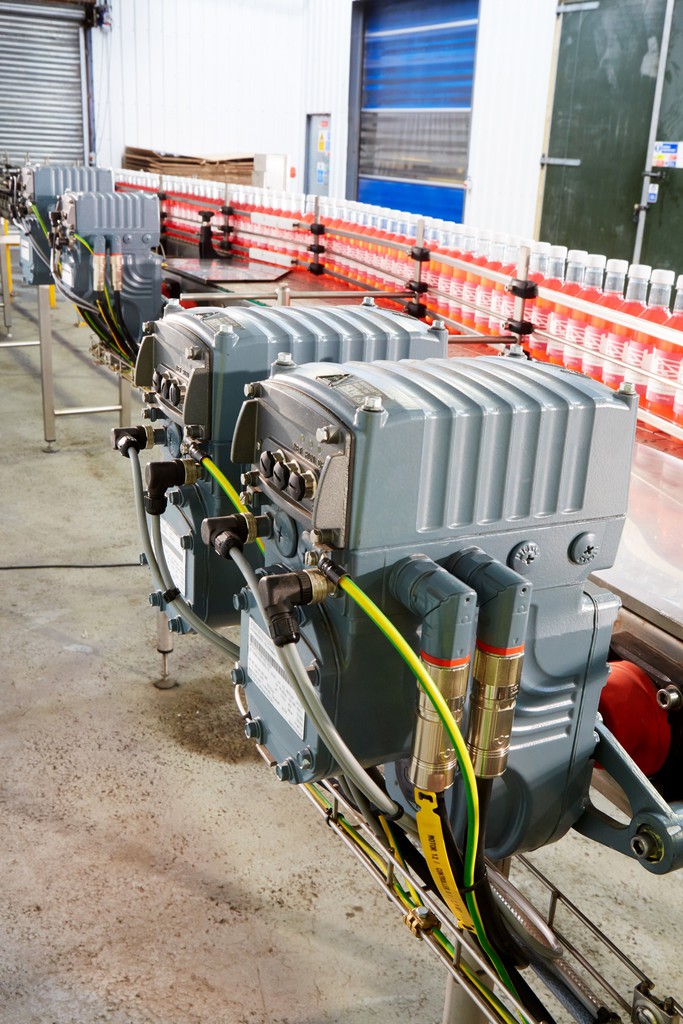 Movigear, is typically able to reduce energy consumption by up to 50%, or more, compared to standard drive products. It is designed with high-efficiency individual components and combines the gearing, motor and drive electronics in a single unit. This makes it possible to do away with control cabinets, saving space, reducing costs and the laborious, time-consuming wiring of motors, sensors and actuators, not to mention the elimination of much of the costly cabling.