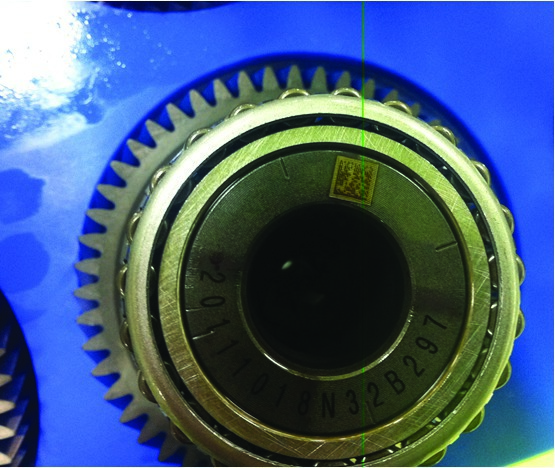 In the automotive industry, data management allows manufacturers to optimise processes and track the high levels of quality that are expected. Having the appropriate data on vehicles and related parts can also help to reduce costs and makes it possible to accurately and promptly respond to quality assurance and recall problems.

In KIA Motors’ traceability program, the 2-D Data Matrix codes marked on the parts are read to determine if they are matched to the appropriate part. Then, production information such as date of manufacture and model number, is saved on the server for full traceability.

The previous barcode reader frequently stopped the manufacturing machines due to the failure to read codes. Because it was manually operated, it was hard to match the manufacturing cycle on time, which, in turn, decreased work efficiency and production yield. Furthermore, there was a possibility of using inappropriate parts if the code read was incorrect, which could cause product defects. This particular line had challenging Data Matrix codes to read since the s-speed transmission parts are small. Furthermore, KIA Motors downsized from 10x10 to 5x5, marking space. As a result, marking quality also declined.

In spite of these challenges, KIA Motors deployed Cognex barcode readers to its 6-speed transmission production line and achieved 99% read rates. Cognex readers are optimised with patented algorithms which help users achieve the highest read rates (99% or greater) on even the toughest DPM and label-based ID applications.

Because KIA Motors’ auto parts are assembled with anti-rust oil spray, one of the challenges for the reader to avoid is errors caused by oil on the code. In addition, the 2-D Data Matrix codes can be stained or damaged by dirt or scratches, even though they have been washed and kept clean. And, with the reduced marking size, the codes are very small and have greater variation in marking quality, making them more difficult to read.

However, these are not challenges for the Cognex barcode readers. The Cognex 2DMax+ code reading algorithm can read virtually any barcode regardless of the damage or the surface it is marked on. In addition, Cognex barcode readers offer Ethernet connectivity so they can directly integrate into the factory network, and direct communication with PLC possible without a transmission device.

KIA Motors has installed the Cognex In-Sight 5110 in every transmission and engine component assembly spot. The car maker has also deployed the compact In-Sight Micro 1110 for small, narrow spaces. In addition, KIA Motors installed the DataMan 8500 handheld readers as a backup system. The fixed-mount DataMan 100X barcode readers have also been used to check the quality of laser marks in the production line.