Central machine monitoring and process optimisation is the best way to ensure that production lines and their associated constituent part machinery operate more effectively and economically. But what about old machines? This is where retrofitting production line machinery with an open source industrial mini-computer can come in 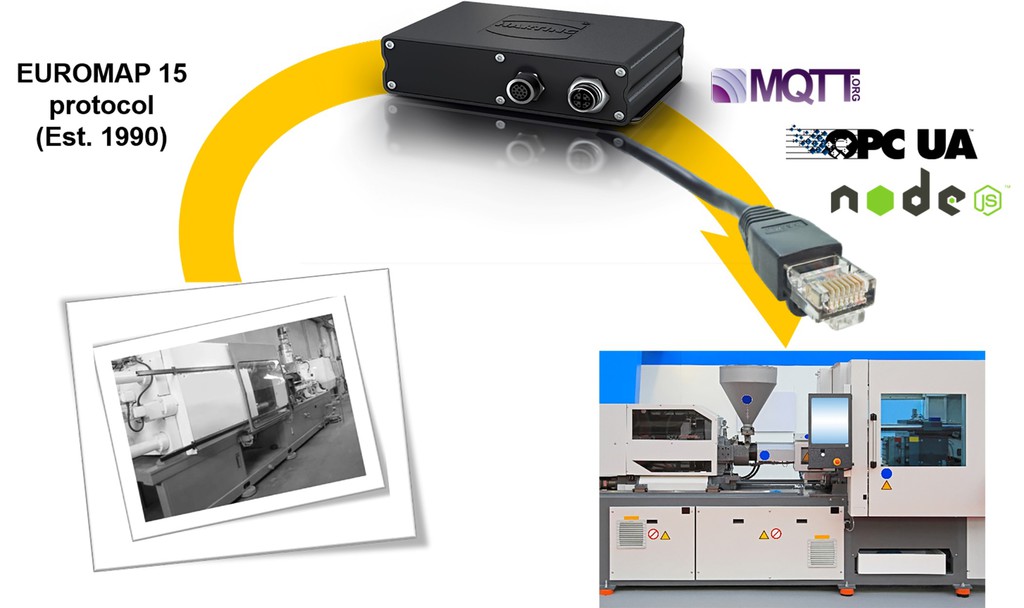 Many machines in well-established production lines, which may be between 15 and 30 years old, can still perform their main functional tasks successfully, however they do so much less efficiently than their modern day counterparts. For example, they don’t have the same level of computing power, enough memory capacity to record and store the relevant data, or ability to communicate with their modern equivalents. In many cases, these machines also use data formats and protocols from the 80s and 90s, which are no longer used by today’s PLCs and industrial PCs.

A prime example of a machine that might perform one critical function within a typical production line environment might be a plastics injection moulding machine. Such machines when well-maintained can reach as much as a 30-year operational life. However, their main operating software protocol would almost certainly be no longer supported and virtualisation in the MES (Manufacturing Execution System), which is a control system for managing and monitoring work-in-process on a factory floor, would neither be economically sensible nor reliable.

Harting's new MICA (Modular Industrial Computing Architecture) edge computing device can directly address the above mentioned issues, upgrading older machines by providing a protocol converting gateway to the central operating software controls of the newer version and at a fraction of the investment cost of such a new machine. This is due to MICA’s modular open IIC platform, which permits the user to choose a familiar programming language and development environment. It can create a virtual image of a device or a machine in the digital world and enables modern interfaces for devices whose communications are outdated. This means that old machine protocols can be converted into OPC-UA or MQTT (a machine-to-machine (M2M) connectivity protocol), in order to connect legacy machines to IoT or MES systems. Remote servicing for the MICA can be performed with a web browser.

MICA (Modular Industry Computing Architecture) is a complete platform comprising a toolkit of hardware and software modules, MICA merges the real world of a production environment with the virtual world of IT and is designed to let developers from both backgrounds realise projects quickly and successfully. It uses a Linux operating system. The unique Virtual Industrial Computing layer provides an innovative combination of established and proven Linux technologies which allow applications to be virtualised in the field without the overhead of running classical virtual machines.

Applications run in Containers which provide all the libraries and drivers to provide a secure, stand-alone infrastructure needed in demanding industrial applications.
The modular design architecture is made from open hardware and software components. Unlike single-board computers – such as the Raspberry Pi – this device is divided into three control boards. A power and network, CPU and an end-user customisable function I/O board. For this function board RFID, WLAN, BLE, SSD storage or fieldbus functionality can be integrated with suitable I/O connectivity, without changing the form factor or degree of protection of the MICA unit.

Linux Containers (LXC) do not use virtual machines: rather than a complete operating system, at the most basic level, a Container is simply a file system containing the application and the libraries and files needed to run it.

Because such containers run in individual ‘Sandboxes’ which isolate and secure different applications from each other with their own separate log-in and IP Address, there should be no concerns over data security when MICA is allowed access to a higher-level production operating network.