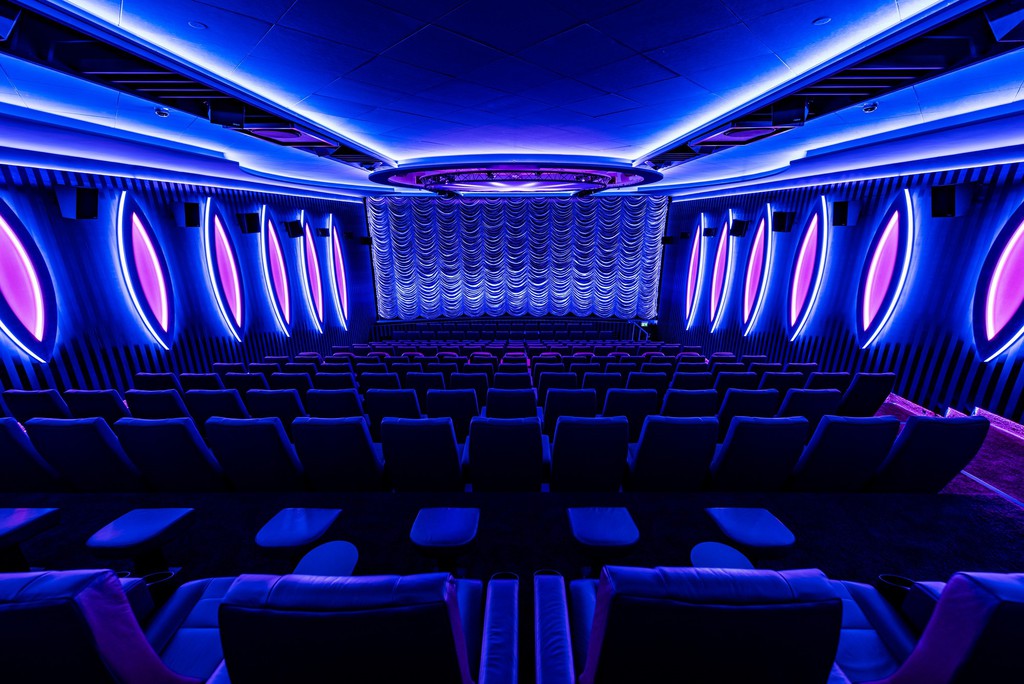 The extraordinary decorative lighting was installed by Berlin-based company, Freilicht! The active combination of red, green, and blue light covers the entire colour spectrum. The LEDs are controlled by dimmers located in standardised control cabinets. The dimmers pass the three pulse-width-modulated voltages to the LEDs to produce the desired colours and level of brightness.

Since the cinema lighting requires a lot of power due to the sheer volume—despite the very efficient LED technology in itself—and intensive use over many hours a day requires a sustained, high-powered installation solution, Freilicht! decided to implement the supply of power with the 24V DC Emparro 3~ switching power supplies from Murrelektronik. Roughly 80 components of this highly-efficient power supply are installed in the control cabinets of the Traumpalast and ensure a reliable supply of power.

The decision for a three-phase power supply was due to the special characteristics of cinema operation: The balanced three-phase load means that the neutral wire is not a current-carrying conductor. This prevents any negative effects on the sound system, with its excellent Dolby-Atmos technology.

Freilicht! CEO Eduard Henke was impressed by the high efficiency of the Emparro power supplies of up to 95%: “This means that they produce very little heat and do not need a cooling system in the cabinet,” the expert explains. The components experience little thermal load and last longer. Since the Emparro power supplies by Murrelektronik also set a standard in terms of the component width and output the same power at half the width (compared to many other devices), Freilicht! is able to use smaller control cabinets. This is a great benefit since they are installed in the projection booths of the individual auditoriums where space is scarce.

The Freilicht! employees have set the utilisation level of the devices at about 70% of the load limit. “This will give us maximum life expectancy and high reliability. We wouldn't want our visitors to end up sitting in the dark,” says Eduard Henke. The fact that switching to full lighting after the light shows results in brief peak loads is not a problem: The Power Boost function (150% power for up to 5 seconds) and the Hyper Boost function (approximately 400% for up to 20 milliseconds) ensure that Freilicht! need not lose any sleep over this.

It is interesting that Freilicht! uses an operating voltage of 24 V to supply the LED strips. Eduard Henke explains: “This is actually an innovation. Usually people use 12V.” He refers to Ohm’s law which states that for the same power, twice the voltage results in only half the current. “Accordingly, we have a proportionally lower voltage drop and this means that the LEDs at the end of the auditorium are as bright as the one’s at the front.”

As Freilicht! manages several cinemas in different locations in Berlin, remote maintenance is an exciting topic to them. For instance, a status report on the PWM modules is sent to the control centre every week. One highlight of the Emparro power supplies that goes even further is the preventative diagnostic function. The device monitors diverse parameters including internal temperature, load situation during operation, the number of start processes, and the life span of the components. Once the optimal time for replacing the Emparro 3~ 40 A has been reached, this information is passed on to the control center via an easily integrated signal contact. The power supply is not replaced too early, which ensures optimal use of available resources, but also not too late, which avoids failures and annoyance.

Manuel Senk, product manager at Murrelektronik and cinema buff, says: “The Traumpalast sets some impressive standards. We are proud to have contributed to the efficient supply of the lighting technology, and as a movie buff it makes my heart beat faster.”