Precision plastic moulder, SynthoTec, has installed a new Kawasaki robot to aid production – and, unusually, has chosen to install and commission the unit in-house, rather use an integrator or the robot supplier do it. The Kawasaki RS20N robot has enabled the company to boost production, cut costs and achieve a significant reduction in waste material in one of its most important manufacturing processes. 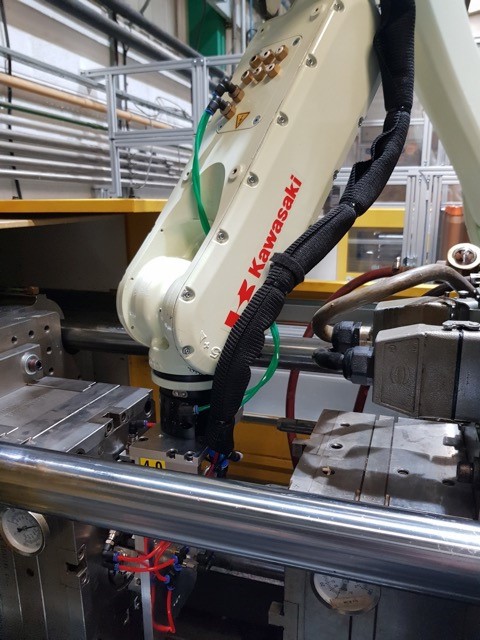 SynthoTec has been making precision parts from plastic for almost 30 years and its bearing cage products are used extensively in two broad application areas. Heavier duty rotating mechanical and electrical applications, such as alternators, air conditioning units, motor vehicles, HGV axles and railway locomotives, form a major part of the business. Additionally, lighter weight, yet equally durable, precision moulded plastic parts are also produced and these find their way into an equally wide range of lighter-duty products, such as child seats, security buckles and power tools.

Numbered amongst SynthoTec’s key customers are internationally renowned global manufacturers of rotating and linear bearings, and to these brand names, including SKF and NSK, the Malvern moulder has become the preferred – and only – supplier of the plastic cages that form such an important part of durable, reliable and friction-free bearings. Because the bearings are used in so many applications across both industry and in consumer products, the precision plastic cages in which they run must necessarily be manufactured in a wide range of diameters.

So, SynthoTec supplies these precision-moulded cages in sizes ranging from as little as 20mm in diameter up to a substantial 250mm, but the company also has the in-house capability to design and produce custom cages (or other special products) of even greater diameter, where required.

Already a heavy investor in state-of-the-art mould tooling, software and moulding machinery, in the early part of 2018 the SynthoTec management team, led by Managing Director Graham Ward, actioned a desire to further automate and install a new robot in the company’s bearing cage demoulding cells. “We targeted a new robot, as we wanted to move the production cell forward to a new concept, and a 6-axis robot enabled us to greatly simplify the cell,” says Graham.

In this particular part of the production cycle, the company wanted a robot to take the cages from the mould, retain them while the waste sprue was dropped into a recycling granulator and then place the finished cages onto pallet-mounted mandrels, all in one swift operation. Each individual mandrel needs to be stacked with up to 185 completed cages and the robot would need to ‘feed’ more than 150 close-packed mandrels in succession on each pallet. The SynthoTec engineering team set about designing themselves an appropriate system to update the cells and embrace the latest developments in robotic assistance. The proposed method, using an off-the-shelf multi-axis robot, was projected to make significant savings in material cost (by reducing wastage and recycling more), by cutting the elapsed time for the process itself and by reducing the number of moving parts in each cell by one third. The opportunity to reduce the number of PLCs used to just one was also embraced.

Having established what they needed, the team at SynthoTec wanted to do something unusual in the automation field: design, install and commission a robotic cell themselves, using the company’s own in-house team of design engineers, production engineers and skilled toolmakers. The company already had a proven pedigree in making and installing its own machinery wherever possible, thanks in large part to the engineering skills available in-house from two experienced automation engineers, Production Engineer Jon Hart and Operations Director Wayne Williams. Mindful that under normal circumstances an OEM would simply call in a robotics partner in the form of a manufacturer or approved integrator to brief them accordingly, agree commissioning dates and prices and let the supplier/integrator get on with it, SynthoTec nevertheless remained adamant that they wanted to do the job themselves. As Managing Director Graham Ward points out: “Robots are an integral part our business, as is our desire to continue developing in-house automation solutions to exactly meet our own needs. It is just one of many facets that allows us to retain absolute responsibility for the quality of end product for which our business is respected by customers. We take this reputation extremely seriously and therefore sought a robot supplier prepared to work on our terms. After a series of meetings with a number of potential suppliers, a unanimous decision was taken to work with Kawasaki Robotics.”

Graham continues: “I would say that the early engagement with Kawasaki was extremely supportive in helping us understand the capabilities of the robot. It actually made us rethink our approach again. It was only the decision to take the integration responsibility back in-house that enabled us to get close to Kawasaki in a way that offered up these opportunities. Synthotec even took the decision to delay the project, in order to incorporate the FULL benefits of the Kawasaki robot.”

Says Synthotec Project Engineer Jon Hart: “We had a detailed list of objectives which we shared with Kawasaki Robotics early on. We needed to achieve significant cost savings across our demoulding cells from improved throughput. We also wanted to reduce the physical size of each production cell, because floor space is at a premium, and we needed a robot that was straightforward to install, programme and manage ourselves. Additionally, we had a desire to do our own training and systems integration on the new robot: to evolve our own way of doing things. And we wanted a robot supplier that recognised our existing in-house skills, was prepared to brief us accordingly, and then let us get on with the job of installing, commissioning and using the chosen equipment ourselves.”

From Kawasaki Robotics’ viewpoint, the task of selecting and recommending a robot that met the detailed brief from the SynthoTec engineering team was relatively straightforward: the RS-20N, in standard form, offered the required high speed in every axis, could demonstrate repeatable accuracy to within +/-0.05mm across each axis for the lifetime of the robot and could also be stopped instantly, should it be required, this being of importance to SynthoTec for operational reasons. Despite the long reach of the Kawasaki RS20N, the compact overall dimensions of the complete unit allowed SynthoTec to meet another key design brief: to reduce the overall width of each of the demoulding cells on the shop floor by at least 1m per enclosure.

With thousands of moulding and demoulding operations taking place on each shift, repeatability, reliability and durability were critical elements in the justification matrix, and SynthoTec calculated that the payback period for all three Kawasaki robots in this application would be just 14 months. Jon Hart adds: “Working with Kawasaki Robotics on this project hasn’t just allowed us to achieve every one of our objectives: it has also allowed us to ‘future-proof’ our systems, too. The Kawasaki system can be easily expanded on, which means that, as we grow, our robot capability also grows for some time to come and we can do it ourselves on demand.” Kawasaki Robotics would expect a lifespan of at least 10 years for each unit, subject to no more than routine maintenance.

SynthoTec’s Operations Director Wayne Williams continues: “Our list of critical criteria that ended in the selection of Kawasaki Robotics as our chosen partner was, as Jon has indicated, very specific. Other key elements that drew us to them were a guaranteed reduction in cycle times for the process, competitive pricing that included a full support programme with no hidden costs, being able to reduce the physical size of each cell and being able to load/unload completed pallets without stopping the production cycle. An additional advantage was the provision of all necessary initial and ongoing training for our project staff at no extra cost. We are extremely pleased that we chose Kawasaki Robotics for another reason, too – we have been dealing with engineers who listen, understand what we’re saying and what we want to achieve, and are always available to us on demand when we have queries or questions.”

SynthoTec remains justifiably guarded about certain specific details of the application, but the fact remains that the system has proved to be faultless in operation.

“One of the unexpected eye-openers for us was the ease with which the Kawasaki Robotics teaching and control pendant can be used – a real surprise,” he concludes.

Kawasaki Robotics Sales Manager Ian Hensman, a 27-year veteran of the applied robotics business, further comments: “SynthoTec were clear from the start about both their application objectives and their desire to manage the project to completion themselves. It was immediately obvious to us that, in this case, we could be completely confident in their ability to commission and install one of our robots, with our team simply providing the equipment, together with oversight and detailed infill, as and when required. It is unusual for a customer to want to do this themselves, as our many integrators will confirm. We were delighted that the SynthoTec engineering team proved to be more than capable of fully integrating our robot into their production processes, with minimal requests to us for clarification and guidance. Between us, we have taken this project from ‘first-meeting’ to ‘up and running’ in just 25 weeks, and the system is performing exactly as they wanted and required it to. And there are further opportunities for even greater throughput instantly on tap, if desired.”

Synthotec Managing Director Graham Ward concludes: “Although we have never thought of ourselves as such, as a result of installing and commissioning our new RS-20N robotic demoulding cells, Kawasaki Robotics have awarded us an ‘Approved Integrator’ certificate for their equipment, which makes us quite proud – we only ever set out to improve our in-house production capabilities, but it seems that our engineering team are as conversant with automation and robotics as they are with producing premium quality plastic parts!”

The Kawasaki RS-20N is a medium-duty robot with a 20kg payload, a horizontal reach of 1,725mm and a vertical lifting capability of 3,078mm. Even though it is regarded as a high-speed machine (for example, the wrist can twist at 610°/sec), the robot still achieves a repeatable accuracy of +/- 0.05mm at maximum lift/reach. In point of fact, in the SynthoTec application it has proved to be working to a tolerance of just 0.02mm over thousands of daily cycles.

Brushless AC servomotors are used throughout and the RS-20N is ideal for operation in environments where good IP ratings are essential – for example, as in this instance, within the plastics industry. The robot’s wrist is certified to IP67, with the arm to IP65, and the unit offers added versatility, with options of either floor or wall mounting as standard.