Robot on the front line against Covid-19

To disinfect surfaces without taking risks, the Bataillon de Marins-Pompiers (marine fire service) from Marseille has equipped itself with two Colossus robots. These remote control and highly modular autonomous robots are proving to be valuable assets in the fight against Covid-19. Fitted with maxon motors, these versatile robots are also capable of supporting the unit in large-scale incidents. 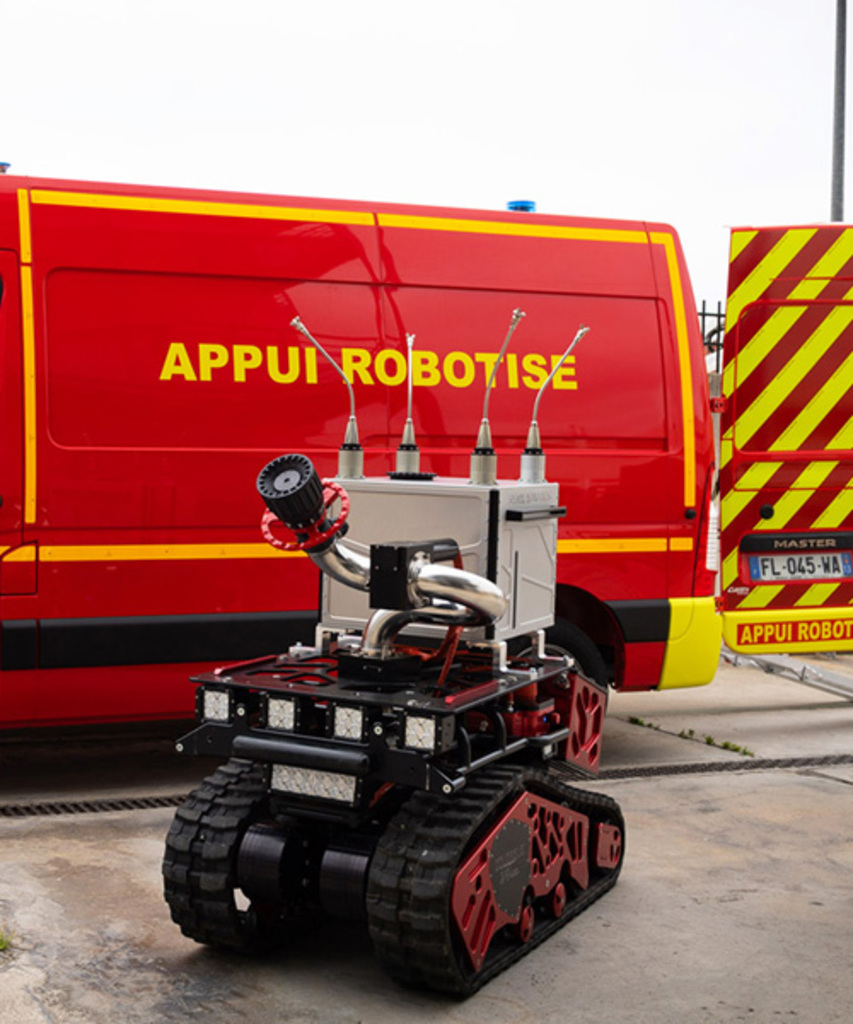 This is not the first time that this robot has hit the headlines: Its services were praised in April 2019, during the Notre-Dame fire. While the fire was threatening the integrity of the structure and endangering Paris firefighters' lives, Colossus enabled almost 3000 litres of water per minute to be sprayed onto the inside walls of the cathedral, without endangering a single human life. Today, with a global pandemic suddenly threatening everyone's health, Colossus has once again been called in to help out.

Developed by the French company Shark Robotics, in partnership with the Sapeurs-Pompiers de Paris (Paris firefighters) brigade, this robot has the advantage of being able to adapt to all kinds of dangerous situations, in a very operationally efficient manner. After proving its effectiveness on fire, Colossus is now being used to combat Covid-19, thanks to a decontamination module. Equipped with a 50 L tank, connected to nozzles that micro-spray disinfectant liquid, the robot is capable of disinfecting up to 20,000 m2 in three hours. If necessary, Colossus can be fitted with a smoke removal fan to facilitate access to an area on fire, or even with a motorised handling arm to grasp and move objects. It is this "Swiss knife" aspect that won over the Bataillon de Marins-Pompiers from Marseille, who acquired two Colossus robots in May 2020. Named Marius and César, in tribute to Marcel Pagnol, the machines are designed to support the unit on numerous assignments.

Remotely operated by a fire officer, Marius and César can change modules as needed in less than 30 seconds without using any tools. Their multiple NRBC cameras and sensors allow them to carry out investigation missions, transport equipment using a pannier, or evacuate an injured person on a towed stretcher. It is also possible to add an HD camera to Colossus to observe the environment through 360 degrees, day and night, or to fit it with sensors dedicated to measuring precise parameters, such as temperature, radiation, or the presence of bacteriological agents.

Convinced of the benefits of Colossus for their tasks, the Bataillon de Marins-Pompiers from Marseille had thought of acquiring one before the coronavirus health crisis. The design of the decontamination module was the clinching point in convincing the teams. As such, as soon as the lockdown phase started to be lifted, Marius was deployed to carry out curative disinfection tasks in enclosed spaces. César should soon follow in its steps, enabling the emergency intervention of the BMPM in all public sites, 24 hours a day. “Faced with an exceptional health crisis, the BMPM has had to quickly adapt its operational response and implement innovative solutions in both human and material terms. Where robotic support was a tool envisaged in the short term within the unit to deal with large-scale incidents, Marius’ disinfection module is helping to supplement our emergency operational capacity for the lockdown lifting phase," said a BMPM spokesperson. The acquisition of Marius and César was financed by the city of Marseille.

Although it weighs 500kg, Colossus measures only 78cm wide and 76cm high, with a length of1.6 m. Compact and robust, it is made entirely of aeronautical aluminium and steel. Capable of carrying loads of up to one tonne, Colossus is fitted with two 4000W motors and six batteries, giving it 10 to 12 hours of running time. Presence of flames, water, dust, etc. To guarantee the reliability of its robot under the most extreme conditions, Shark Robotics has called upon the expertise of MDP – maxon France for the choice of its components. The motors had to be both compact, efficient and very energy efficient, particularly when it came to fitting Colossus’ motorised arms. Shark Robotics quickly focused on maxon products for their choice, whose motors are already used on exploration robots sent to Mars. Colossus is currently made up of 19 different products supplied by maxon.