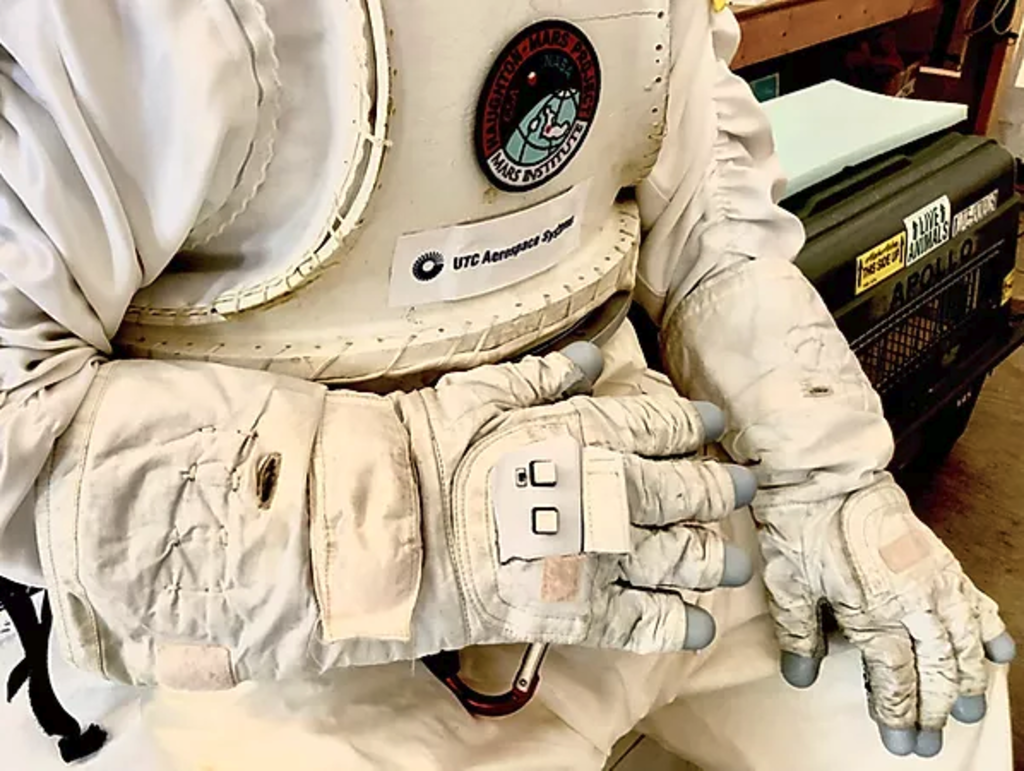 The smart glove is a prototype for a human-machine interface (HuMI) that would allow astronauts to wirelessly operate a wide array of robotic assets, including drones, via simple single-hand gestures.

NASA plans to return to the Moon by 2024 with the Artemis Program, and then send astronauts to Mars. Both missions are expected to include an expansion of surface extra-vehicular activities (EVAs) in both quantity and complexity compared to Apollo. Future planetary spacesuits are expected to improve in nimbleness and comfort over time. But, as pressurised vessels, spacesuits are likely to remain fundamentally cumbersome, limiting the dexterity and precision with which astronauts may perform tasks such as collecting samples and operating robots.

“A smart glove-equipped spacesuit could be a solution” said Dr Pascal Lee, a planetary scientist with the SETI Institute and the Mars Institute, and director of the NASA Haughton-Mars Project at NASA Ames Research Center. “With it, astronauts could easily control a range of robotic assets, making science and exploration operations on the Moon, Mars and at other destinations more effective and productive”.

The NASA Haughton-Mars Project is a leading international Moon and Mars analogue field research project centered on the Haughton meteorite impact crater and surrounding terrain on Devon Island in the High Arctic. As one of the most Mars-like places on Earth, the site is often called Mars On Earth. Over its twenty-three years of history, the NASA HMP has made many contributions to the advancement of planetary science and exploration through field studies at the site, in particular in the testing of new technologies for space.

Ntention, formerly Arveng Technologies, developed the smart glove technology tested during last year’s HMP-2019 summer field campaign. A start-up company founded and run by students at the Norwegian University of Science and Technology in Trondheim, Norway, Ntention is best known for the design and development of a ground-breaking smart glove capable of controlling drones among other robots by simple single-hand gestures.

“Our philosophy is to create technology that makes human-machine interfacing intuitive and seamless,” said Moina Medboe Tamuly, COO and co-founder of Ntention, and a field participant at HMP-2019.  “Now, we are excited to see that our technology has potential applications in space exploration”.

After seeing a demonstration of Ntention’s smart glove for terrestrial applications, Lee suggested that it could be applied to an astronaut’s spacesuit and proposed to carry out a field study of the 'Astronaut Smart Glove' concept at HMP. The Ntention team took up the challenge with Tamuly as lead designer for a prototype.

“When I first saw Ntention’s smart glove in action, I immediately thought of Arthur C. Clarke’s Third Law: ‘Any sufficiently advanced technology is indistinguishable from magic,” recalled Lee. “A pressurised spacesuit is relatively rigid, and hand and finger motions meet with substantial resistance. In the astronaut smart glove the sensitivity of hand motions is adjustable and can be set high, which means the technology might be adaptable to a stiff pressurised spacesuit."

“The Ntention smart glove uses a micro-controller to read different kinds of sensors,” explained Sondre Tagestad, system development engineer at Ntention and also a field participant at HMP-2019. “The sensors capture even subtle motions of the hand and fingers, and wirelessly transfer these to a mobile device that controls the drone or any other robot.” Tagestad was the technical lead on both software and hardware for the prototype astronaut smart glove."

For the HMP-2019 field test, the Ntention smart glove technology was integrated to an existing Collins Aerospace concept spacesuit used in analog studies at HMP. Since the year 2000, Collins Aerospace, formerly Hamilton Sundstrand and then United Technologies Aerospace Systems, has been collaborating with the NASA HMP in the design and development of an advanced spacesuit for future Moon and Mars exploration.

“Astronauts need spacesuits that make it easy for them to interact with their environment, including perform complex and delicate tasks,” said Dr Greg Quinn, advanced spacesuit development lead at Collins Aerospace. “The next generation suit will incorporate intelligent technologies that will take current capabilities to a new level.”

Team members evaluated the astronaut smart glove technology at HMP-2019 through a series of field tests involving the tele-operation of commercial drones. While drones on Earth commonly use rotors for flight, the lack of a substantial atmosphere on the Moon means that drones there might use propulsive gas thrusters instead. On Mars, where there is a substantial atmosphere, albeit thinner than Earth’s, drones might use either rotors or thrusters, depending on the altitude of the sites where they would fly.

“Astronauts on the Moon or Mars will want to fly drones for various reasons,” explained Lee. “For instance, to collect a sample that is out of reach or that needs to be isolated from contamination. Or to assist in a search and rescue operation. Over the past few seasons at HMP, we have been looking with NASA at how robotic flyers might assist astronauts in a variety or science and exploration tasks, including surveying, mapping, sampling, scouting, fetching, and inspecting.”

Field tests at HMP-2019 demonstrated how an astronaut in a spacesuit would be able to single-handedly perform several key science and exploration tasks with ease using the smart glove and an augmented reality (AR) visualisation interface. Other tests at HMP-2019 quantitatively rated the drone handling qualities allowed by the smart glove interface using standardized flight test metrics.

“The flight and operations tests suggest that the smart glove and AR human-machine interface would allow astronauts to operate drones and other robotic assets with ease and precision, including in a pressurised spacesuit,” said Brandon Dotson, an aerospace engineer and test pilot with the US Army who served as primary test subject in the HMP-2019 field tests. Dotson is also the recipient of the HMP’s first “HMP Apollo Fellowship,” a new award created on the occasion of the 50th anniversary of the Apollo 11 Moon landing.

The evaluation of the astronaut smart glove for Moon and Mars exploration is expected to continue, in particular with applications to the control of other types of robotic assets including robotic manipulators, rovers, and other planetary science and exploration systems. The promising early results obtained this summer might herald a new era in human-robot interactions and space exploration capabilities.