Jim Norton, technical manager at Brevini, looks at the requirements of a modern gearbox when operating in the wastewater industry. 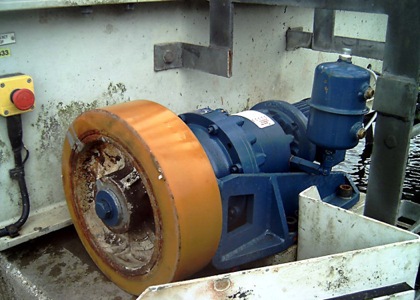 Gearboxes are used throughout the wastewater industry; in filtering, pumping, settlement, thickening and aerating equipment. The gearboxes are often located in remote locations or as part of large outdoor processing sites; and as such are expected to perform reliably to avoid time-consuming maintenance requirements. However, even the best components have a finite life expectancy and eventually need to be replaced. During replacement it's important to consider how different designs may improve efficiency, maintenance commitments, and fit within the original footprint.

Many sewage treatment works (STW) have a range of ageing assets which will be under review for repair or replacement in order to maintain the required levels of operation. Failure of these assets can result in serious consequences, such as increased levels of certain chemicals in the final effluent which is returned to the local watercourse. This can trigger a non-compliance charge from the Environment Agency (EA) which often results in a significant fine for the utility company operating the STW.

The choice which usually faces the site manager when an asset reaches the end of its expected lifespan is one of repair or replace; a common dilemma experienced by maintenance engineers across the globe. In this environment, where reduced running costs and improved efficiency is paramount, replacement is usually seen as the better option. However, replacing a gearbox on an ageing piece of equipment could entail a lengthy project to redesign the asset in order to accommodate the new gearbox.

In terms of gearbox design, choosing a planetary arrangement offers increased reliability with a higher efficiency and reduced size and weight. Typical efficiencies of the planetary unit are 98% per stage, ensuring that the energy being generated is not being consumed by mechanical losses. The knowledge that a single stage planetary gearbox unit is around 98 percent efficient, even at very low speeds, can be useful, especially when compared to some traditional worm gears where efficiency can be as low as 50 percent.

Planetary gearboxes are designed specifically for arduous, continuous applications such as those in the wastewater industry. The planetary design has inherent advantages over conventional helical gearbox designs because there is an equilibrium of forces on individual gears; so the planet-carrier is in charge of transmitting torque only. Conventional helical gearboxes employ a system of bearing-supported gear-carrying shafts where forces are concentrated. Planetary gearboxes have a complete gear system that is in-line, so there are no high torsional loads on the bearings and gear elements.

One application which proves particularly arduous is powering the bridges that are fitted to settlement and thickener tanks. Whether it is a central drive system for a full bridge, or a peripheral drive for a half bridge, the load from the scrapers and thickener fences is unrelenting; and the drive must perform at speeds as low as 0.05 rpm, 24 hours a day, 365 days a year.

To drive the scrapers through the settled solids could require anywhere between 1,000 Nm and 50,000 Nm, depending upon the tank size and the process in question. By using a planetary arrangement, there are no lubrication problems arising from the drive operating at such low speeds, a condition which can reduce the reliability of conventional gear units.

In the event of a drive failure on such equipment, the site owner could be faced with the choice of having to pay for the original gearboxes to be remanufactured or to replace a large part of the tank’s peripheral equipment including the bridge and drive system to fit a modern replacement. Fortunately a better solution is offered by Brevini Power Transmission, which can design and engineer a modern planetary solution that may be fitted as a direct replacement for the failed gearbox with no additional engineering required to the bridge.

This solution means that the original mounting and bridgework, which is normally sound, can be retained and the overall project time for replacement has been reduced drastically compared to the alternatives. The equipment is only out of action for a matter of days rather than weeks and the commissioning itself is straightforward and relatively simple to complete as no adjustment of the original mountings or drive is required.

Paddle aerators are another strenuous application which can involve huge loads being applied to the gearbox as well as frequent start / stop cycles and changes in speed, which is governed by the oxygen levels in the aeration lanes. The design of the multi-stage planetary gearbox offers the inherent capacity of a planetary gear train, which is able to deliver high reduction ratios in small packages, typically 10,000:1, enabling them to transmit three times the torque of similarly sized, conventional, spur gear units.

Two further aspects are critical when assessing potential replacements. The first is the physical weight of the aerator paddles, up to half a tonne each with the majority of the weight sitting on the gearbox end bearings. The second is vibration, caused by the fact that the paddles are not perfectly balanced to start with and compounded by the effects of subsequent uneven corrosion and weathering that is typical of these items.

Vibration is the bane of all mechanical systems and in extreme cases such as this application; it can weaken mountings, wear-out gears and cause bearings to collapse. The effects of vibration can be reduced by selecting special anti-vibration washers and nylon-sleeve locking bolts, in addition to balancing the paddles and fitting large taper-roller bearings to the final output stage of the gearbox, a greatly improved solution can be delivered.

Many sites are equipped with Archimedean screw pumps, which incorporate conventional gearboxes running at poor efficiency levels. The benefits to replacing these older gearboxes with a highly efficient planetary gearbox is obvious, as they are able to run using a smaller motor than conventional gearboxes. The new gearbox can also be designed such that it can be retrofitted to the existing structure, which decreases the cost of installation.

Following an on-site consultation, Brevini is able to recommend a suitable gearbox and design a mounting bracket that would allow it to fit directly into the position of the legacy equipment. The output shaft may be designed to be of the same diameter as that on the previous gearbox, while a backstop may also be fitted to prevent the screw running backwards when it stops.

Sites which have completed this upgrade have typically reported that the pump is running with 16 percent more efficiency than previously - with the gearbox running to an efficiency of 96 Percent. Running costs have been greatly reduced as the new gearbox requires less current. This equates to a significant reduction in energy costs and maintenance costs, all of which helps site managers to improve reliability and cut overheads.

In the current climate a pressing issue throughout industry is that of energy efficiency. Brevini Power Transmission is expanding its solutions within the utility sector and offers a series of planetary reduction stage gearbox designs that are ideal for use in arduous applications within the water industry.

The Brevini planetary gearbox has increased ratings for radial load and torque transmission, which ensures that the planetary gearbox should be a permanent solution for many years to come. As a complete package, including high efficiency motors, Brevini offers a solution which can greatly reduce costs at the initial installation, as well as deliver improved efficiency and reliability. Planetary gearboxes are now offered with a ten-year minimum life expectancy and have a proven track record of dependable, efficient performance, making them an essential asset.

The company has a long-standing history of supplying OEM manufacturers of new water treatment equipment worldwide because the majority of applications lend themselves to the low-speed, high-torque characteristics that make planetary solutions ideal. More recently, Brevini has been supporting more UK Water Authorities with ‘engineered solutions’ to troublesome, obsolete gearbox drives, which allows a new design to be installed without any modifications to the existing structures.