LED or Laser? Choosing a photosensor

Modern photoelectric sensors typically employ one of two light technologies, either LED or laser. The choice of light source - opposed, retro-reflective or diffuse - can be as important for a reliable application as the choice of sensing mode 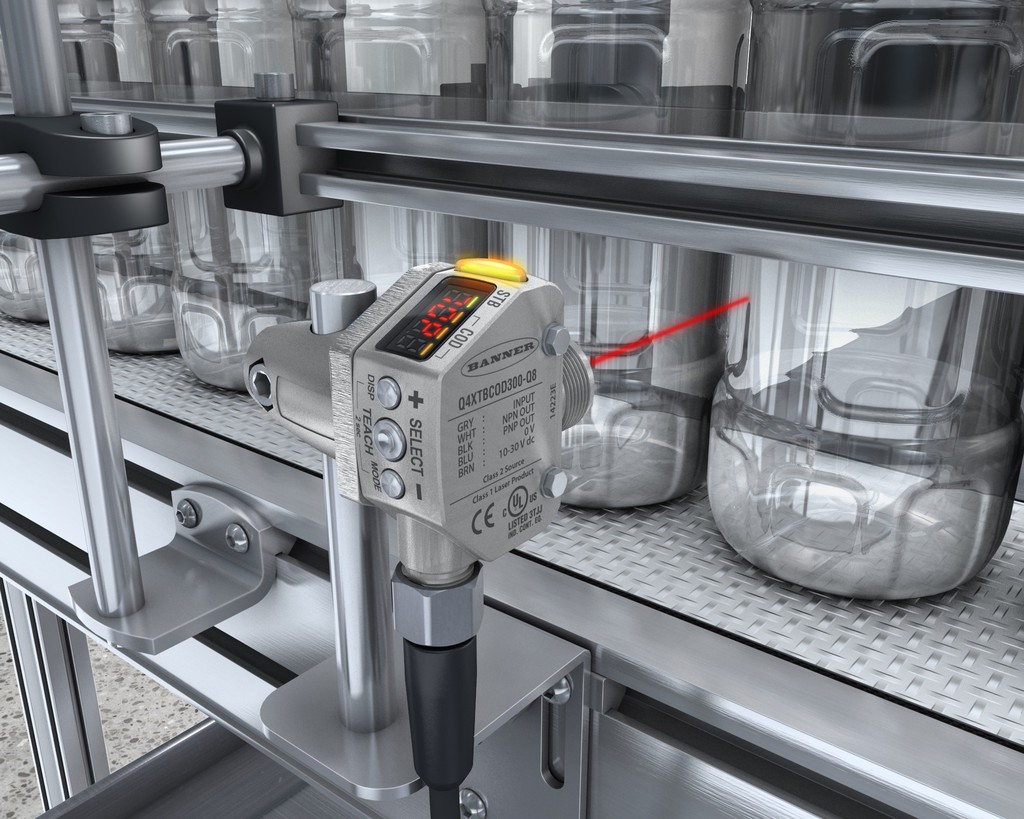 The main difference between laser light and LED light is how they react with the outside world. The key property is coherence. All natural light and most man-made light is incoherent and has many wavelengths. This is why it spreads out from its point source as it travels. Laser light, on the other hand, remains in a tightly-focused beam over great distances.

LEDs also generate near-monochromatic light: they have a broader spectrum of wavelengths than lasers; but the light is incoherent. It is the coherence of laser light that gives laser sensors their very narrow beams that can travel great distances without spreading out, making them especially suited for certain types of application, yet a very poor choice for others.

The small spot size of a laser sensor makes it ideal for detecting small objects or features. It also allows objects to be detected in holes or recesses where the reflections from the side walls would make it impossible for LED sensors. The single wavelength of the laser light produces a precise colour that allows the detection of small colour differences that an LED sensor would struggle with.

A laser emitter has a very narrow beam pattern and although this beam can travel a very long way small amounts of vibration will move the beam off the receiver and break the beam. Laser-based sensors are also restricted in the amount of light power they can produce, as the risk of blinding someone would make them too dangerous to use in a normal working environment. Whilst conditions are good, this low power does not cause any problems, as it remains concentrated in a small area, but dirt, oil, snow, etc. can disperse, block or divert the beam. This can also be an advantage when detecting clear objects and semi-opaque objects - whereas an LED beam could pass straight through, the laser beam will be affected.

Banner Engineering's Q3X laser contrast sensor is particularly good at detecting small contrast changes where a background needs to be ignored. A typical example is label detection on a bottle where contrast differences between the label and bottle provide reliable detection, but the sensor must ignore the shiny metal rail in the background.

Where laser sensors really excel is in distance sensing. The narrow beam is ideal for triangulation, where the position of the beam reflected from an object will change with the distance that the object is away from the sensor, the intensity of the beam will remain relatively unchanged with distance. Conversely, attempting to use a standard LED sensor for distance measurement is normally a poor choice.

The ability to detect the object distance allows the sensor to overcome a number of common sensing problems. A background suppression or fixed field sensor will ignore a shiny object that is beyond its cut-off point and still be able to detect a dull object just a few millimetres in front, whilst a foreground suppression sensor will ignore objects closer than its cut-off point. It can detect clear objects without requiring a retro-reflector.