Turck Banner’s systems division brings together a diverse array of products to form cohesive systems, meeting the requirements of a huge range of industrial companies. However, the company had not manufactured it own product in the UK until July this year, when it started producing systems to support social distancing and occupancy for shops and factories 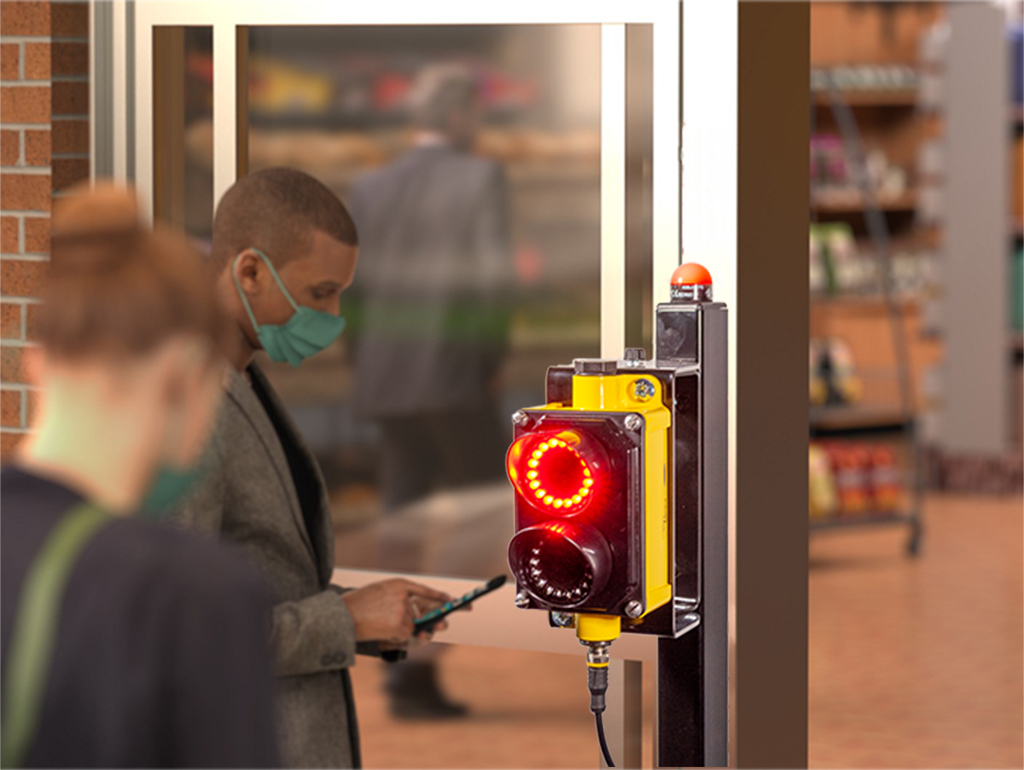 In something of a departure from its largely industrial client base, early in the Covid-19 lockdown, Turck Banner saw an opportunity to support shopkeepers’ need to control the flow of customers entering their premises. Customers were often seen queuing outside shops unsure whether it was safe to enter or not, and even avoiding shops with a long queue altogether, choosing an alternative with a shorter wait time. Turck Banner’s systems team were challenged to come up with a solution using the following criteria; it needed to be simple to use, easy to fit, low cost and adaptable to changing government rules.

Two solutions emerged. The first was a simple combination of a power plug, an inline changeover switch and a red-green tower light. The light could be mounted in the shop door or window with the switch placed near the till. The shopkeeper could then turn the light red or green, like a traffic light, to allow customers into the shop or request that they wait. This could be sold for just £90

The second solution replaced the mechanical switch with a remote control, allowing the shopkeeper to turn the light red or green.  This had a higher price at £210 but reduced the installation requirements.

Turck Banner trialled both systems at a variety of shops and found the greatest challenge to the systems was the general public. People were not used to any sort of automation controlling the entrance to shops, they were too busy trying to peer inside, to see if it was safe to enter, to notice the light and signage. As the light needed to be more prominent, mounting it outside the shop could be a solution, however this would require permanent installation work. Temporarily running cables around some shops was also challenging.

Using feedback from the trials, the systems division developed a standalone cordless control station. It used the remote control, which was the most popular of the original designs. The tower light was replaced by a daylight visible red/green traffic light mounted on a 1.5m post and a base containing a rechargeable battery and the remote controller. The station is weatherproof and is positioned at the entrance. The traffic light gives a clear instruction to enter or wait, and a repeater indicator is located on top of the post to ensure that the shopkeeper can see if the traffic light colour is red or green from 360 degrees. At the close of business the station is taken inside the shop and placed on charge for the next day, although the battery will last for more than two days in operation. This solution still costs just under £500 and requires no installation.

Trials of the new system proved to be much more successful. When the station was placed prominently outside the entrance to the shop, customers would enter or wait at the command of the shopkeeper. Queues were kept to a minimum and the shopkeeper had control of the number of customers in the premises.

The systems division then turned their attention to our more usual, industrial, customers to see how this may be of benefit to them and whether the station could be adapted for their needs. Two opportunities to assist were identified.

The second requirement of maintaining social distancing on stairs needed another solution. Most stairways have become one-way to avoid people crossing, but for a number of customers, people were still bunching and not allowing enough space before using the stairs.

The Stair version of the control station is fitted with a single sensor which detects anyone passing as they start upon the stairs, at which time the indicator light turns red for a set period of time before returning to green. The default setting is 4 seconds which produces an average space of 2metres between people but is adjustable to between 1 and 15 seconds.

Everyone has had to make changes because of Covid-19. Turck Banner has added manufacturing to their capabilities. Companies need to do more than, just make the changes required to protect their staff. They need to take this opportunity to see what improvements can be made in order to emerge from this pandemic as a better company.

Peter Gardner, managing director, Turck Banner said: “In these times when many people are struggling it feels good to be able to support local businesses both in providing solutions and by procuring as many parts as we could locally and manufacturing locally.”