IN THE increasingly data-driven industrial environment, sometimes it is simple and clear information on the factory floor that is needed to enhance efficiency and productivity, asserts Ian 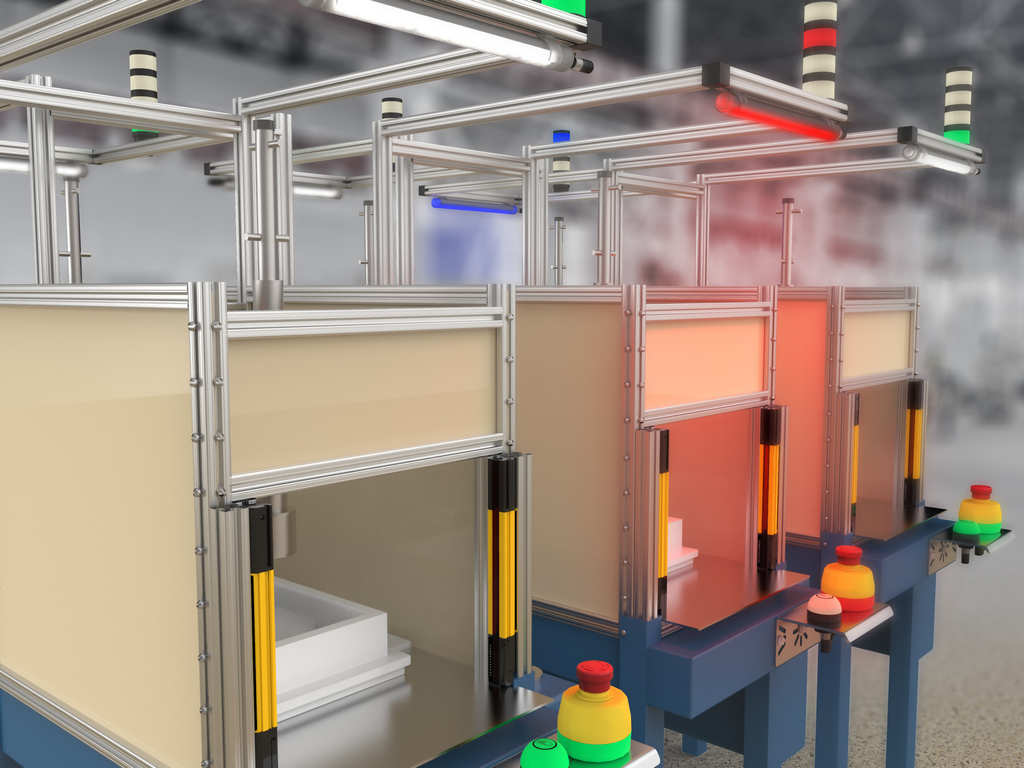 The growing trend across industry to improve efficiency and productivity by gathering and analysing data is putting large amounts of information in the hands of management. While lots of data is good, and areas for improvement are often identified through this process, sometimes it is simple and clear information that is needed on the factory floor to improve efficiency and productivity, especially as the demands on each worker's time is increasing.

Although most machines that frequently need operator attention have a tower light indicating red, amber and green for the overall health of the machine / process, the operator still has to approach the machine to read an information display, in order to find out why the tower light is not on green (indicating that everything is good).
The operator could be far more efficient and productive if the most common conditions affecting a machine could be identified from a distance.

For example, a light strip that illuminates along its length which indicates the percentage fill level of a hopper. An operator with multiple machines could easily see which of their machines required more material. They would also be able to gauge how many machines would soon require more material, how much material to obtain and in what order they would need to attend each machine.

It is not just the humble tower light that can be improved upon. Visual indication as guidance to operators can improve efficiency in many different operational areas.

If an E-stop is pressed on a machine, the operator needs to know the location of the Estop that was pressed before the machine can be restarted. Typically the machine may have a tower light showing red to indicate machine stopped, and perhaps an HMI displaying the Estop location, or a simple location number. However, using illuminated E-stops, which show red when activated, and having the machine lighting turn from white to red in the affected area, would guide the operator to the location quickly and efficiently.

Another example of improving safety and efficiency is in a continuous palletising process. As floor scanners are often used to protect the area around the robot, the operator needs to know when it is safe to enter the area without tripping the safety system.

By using coloured LED lighting, the area that is safe to enter can be illuminated green, while the area in which the robot is currently active is illuminated red.  When the robot completes its task in one area and moves to the next, the illumination colours change to indicate the new conditions. This technique has been seen to greatly reduce the number of accidental stops from people stepping into the red area.

Using the large multicolour strip lights, to indicate the presence of fork lift trucks and AGVs, on the corners in corridors and aisles in warehouses can improve safety and avoid product damage by collisions.

In areas where the drop zone is obscured by the load being transported, lights showing the position of the load within the drop zone improve the speed of the operation and avoid damaging the load.

In this application, on the horizontal light,  the green area represents the load and the yellow area either side shows the distance from each edge. This allows different width loads to be positioned accurately. The driver can also be guided towards the centre of the drop zone by turning one of the yellow areas red to indicate that the load is too close to that side, then turning amber as the load approaches the centre position, eventually turning to yellow when the load is positioned within the desired tolerance. The vertical light shows the distance from the back of the drop zone, the light changes colour to indicate the optimal position.

Indication is not limited to red and green. The full RGB spectrum of colours can be used. This can be combined with animation and sound to convey multiple statuses, effectively giving your machine its own voice.

The same area on a light can change to a different colour, thus indicating the same information but with a different priority. For example a light indicating Takt time can gradually illuminate green along its length to represent the time passing but, as the time duration approaches its maximum, the green illumination can turn amber and then red. The percentage of the light illuminated always represents the time duration, while the colour represents the urgency.

Sometimes it is useful to display machine status that may not appear to be relevant to the machine operator. A good example of this is Machine Startup. Machine Startup could be indicated by animating the light to produce a circling effect in the lights. The machine operator may not be particularly interested in the startup indication but if a machine further along the production line is indicating an issue with material shortage, being able to see that the machine supplying the material is starting up, may indicate that the current issue will resolve itself with no further action required.

Turck Banner offers a vast array of LED lighting and indication products specifically designed for industrial use. Many of these products can be easily programmed with a free graphical user interface program. Programming can be done dynamically by a PLC or pre-programmed and activated by discrete , analogue, IO-Link or pulse modulation.

The use of visual indicators to impart information from a distance can make huge gains in workplace efficiency, safety and environment.