According to HMS, Industrial Ethernet is growing faster than before and now accounts for 38% of the market. 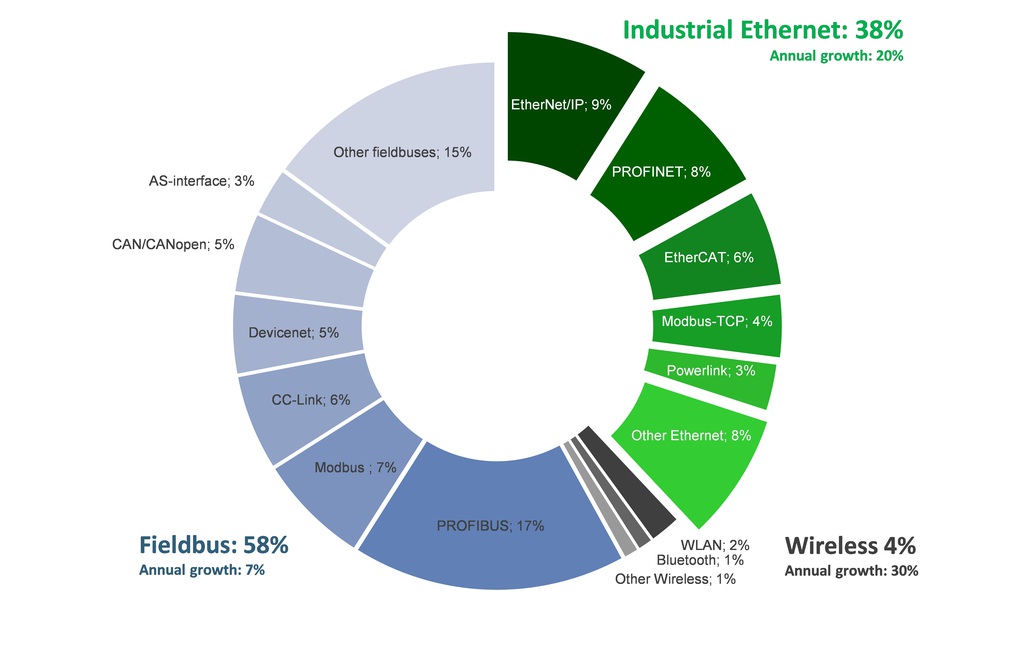 EtherNet/IP is in first place within industrial Ethernet globally, followed by PROFINET. However, classic fieldbuses are still dominating the fragmented world of industrial networks with 58% and PROFIBUS is still the most widely used industrial network. Furthermore, the Internet of Things is driving wireless technologies which are now on the chart for the first time.

Looking at new installed nodes within factory automation globally, fieldbuses are still the most widely used type of networks with 58% of the market. Fieldbuses are still growing by approximately 7% per year as users ask for simplicity, tradition and reliability. The dominant fieldbus is PROFIBUS (17% of the total world market including industrial Ethernet) followed by Modbus (7%), and CC-Link (6%).

Industrial Ethernet is growing faster than before

According to HMS, industrial Ethernet is growing faster than previous years and taking more market shares. At a growth rate of 20%, Ethernet now makes up for 38% of the global market compared to 34% last year. EtherNet/IP is the number one Ethernet network with 9% followed by PROFINET (8%). Runners-up are EtherCAT, Modbus-TCP and Ethernet POWERLINK.

“We see evidence of an accelerated transition towards industrial Ethernet when it comes to new installed nodes,” says Anders Hansson, marketing director at HMS. “However, industrial automation is a conservative market and it will take time before industrial Ethernet outgrows fieldbuses.”

For the first time, wireless technologies are on the chart with 4% of the worldwide industrial network market. WLAN is most popular, followed by Bluetooth. “We see the Internet of Things as a big driver for wireless technologies,” says Anders Hansson. “Wireless opens up for new automation architectures and is increasingly being considered for machine connectivity and control, including Bring Your Own Device (BYOD) solutions via tablets or smartphones.”

In Europe and the Middle East, PROFIBUS is the leading network while PROFINET has the fastest growth rate. Runners up are EtherCAT, Modbus-TCP and POWERLINK. The US market is dominated by the CIP networks where EtherNet/IP is overtaking DeviceNet in terms of market shares. In Asia, no network stands out as truly market-leading – PROFIBUS, PROFINET, Ethernet/IP, Modbus and CC-Link are widely used. EtherCAT continues to establish itself as a significant network, and there are early signs of CC-Link IE Field being adopted.

More and more devices are getting connected

“The presented figures represent our consolidated view, taking into account insights from colleagues in the industry, our own sales statistics and overall perception of the market,” says Hansson. “It is interesting to see that industrial Ethernet is now growing faster and that wireless technologies are gaining foothold. What is completely clear, however, is that the network market remains fragmented as customers continue to ask for connectivity to fieldbus, industrial Ethernet as well as wireless networks. All in all, industrial devices are getting increasingly connected, boosted by trends such as Industrial Internet of Things and Industry 4.0. With our long-term motto ‘Connecting Devices,’ HMS is well-suited to grow with these trends.”