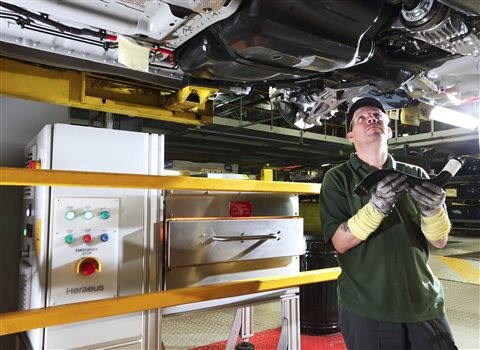 The rubber fuel pipes need to be fitted on the production line but, because of the hardness of the rubber and the tightness of the fit, operatives were having trouble in securing the pipes. As a result, samples of the hose were supplied to the Heraeus Applications Centre in Neston, Wirral, where successful trials were carried out to devise an infra-red system.

The system was eventually installed on the Jaguar production line at the hose-fitting location. It consists of a floor-standing aluminium framework, containing a controllable 4.8 kW heater zone, made up of two heater modules, each fitted with four 600W short wave emitters. The heater zone is provided with a sliding drawer and, in operation, a hose to be heated is placed on the table in the drawer between two locating pins.

When the drawer is shut manually, the heating cycle commences and the penetrative short wave infra-red radiation heats and softens 80-100mm of the hose length. This is done in two stages: an initial warm-up time of five to six seconds at 50-6-% power; and then a holding time, when the heaters drop to around 5-10% power to maintain the heat on the hose and ensure that the rubber is soft enough for fitting. Heating stops when the drawer is opened and the hose is removed, with its end sufficiently soft to allow easy fitting to a car as it passes on the production line. Another hose can then be inserted in the oven and the cycle begins again.

The installation of the new infra-red oven has greatly facilitated hose fitting.