Originally launched in 2015 to assist workers in lightweight assembly tasks, ABB’s dual-arm collaborative YuMi robot has, says the company, gone on to blaze a trail in a raft of diverse applications and industries, opening new opportunities and helping to fire people's imaginations about what can be achieved with robotic automation. 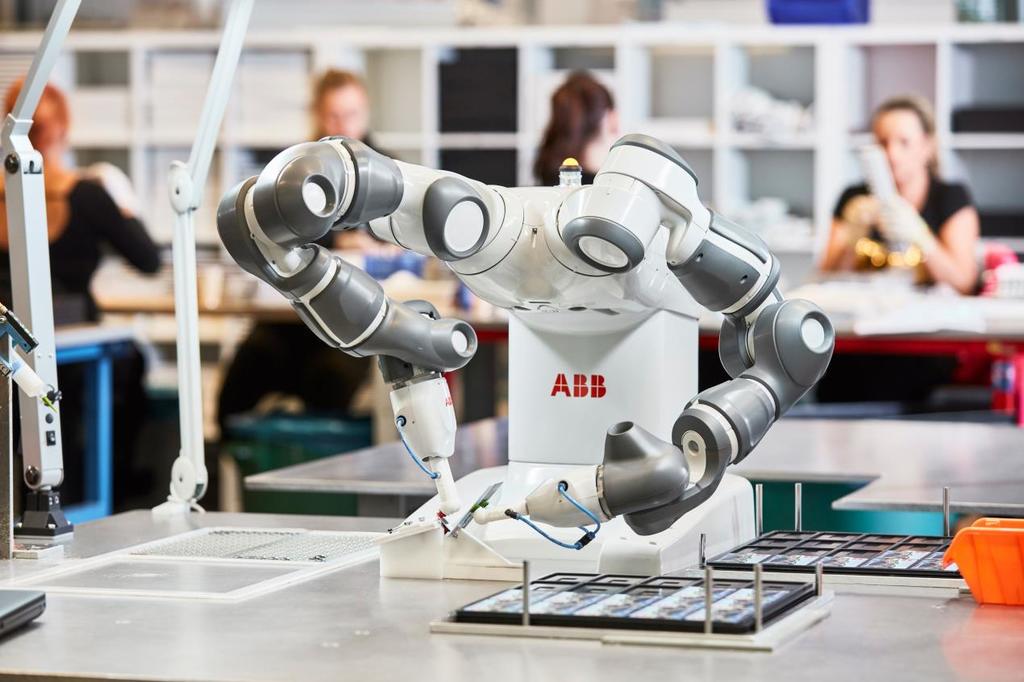 With its ergonomic design and a range of safety features, including lightweight magnesium alloy arms with soft-padding to avoid pinch points, advanced motion control with collision detection, YuMi is designed to be installed in workstations alongside people and increase flexibility by allowing humans and robots to work on tasks together that previously would have required safety barriers or cages.

YuMi has set the standard for safety in collaborative applications where robots and manual workers need to work side by side. With its dexterity and dual-arm 14-axis design, YuMi has played a key role in enhancing productivity and quality on production lines worldwide, from assembling electronics and electrical components to sorting candy in confectionery factories.

By removing the need for bulky and expensive safety measures such as fencing, YuMi has removed both the physical and psychological barriers separating people from robots. Key to YuMi’s popularity has been its friendly design that mimics the size and movements of a human operator, and its ultra-low weight soft padded arms, which allow it to safely move faster than other cobots.

“Five years ago our vision for YuMi was to set a new standard for collaborative robotics, creating a robot able to work hand-in-hand with humans without further protective measures or barriers, while being simple to install and operate,” said Sami Atiya, President of ABB’s Robotics and Discrete Automation business area. “YuMi has proved to be incredibly popular, creating a new category for small, collaborative robots for material handling and assembly and inspection, while broadening the appeal of collaborative robots in an expanding range of applications, from manufacturing to healthcare and beyond.”

Since its launch, YuMi has become a cornerstone in the broad portfolio of collaborative automation solutions of ABB Robotics and Discrete Automation. It has racked up an impressive employment history, delivering results in everything from producing electrical sockets, to helping to test the security, reliability and durability of ATM machines for Swiss-based payments software provider Abrantix AG. With the medical sector looking to improve efficiency, YuMi has branched out into healthcare and pharmaceutical applications, assisting with tasks in laboratories and medical facilities. Copan Diagnostics in the USA, for example, is using YuMi-based HEPA filtered bio-safety workstations to manage tissues, bone and sterile fluid samples, as well as transporting traditional swabs and blood cultures.

YuMi has also had a big impact outside the workplace. Milestones include meeting world leaders Angela Merkel, Barack Obama and Naresh Modi, conducting an orchestra with Andrea Bocelli in Pisa, Italy and serving coffee to the public at Selfridges department store in London and Bloomingdales in New York.

“YuMi has captured the imagination of the public, appearing in everything from music videos to popular TV shows, doing everything from making paper aeroplanes to performing card tricks,” added Atiya. “Underlying all of these fun applications is the serious message of how robots like YuMi are helping to change attitudes towards robotic automation. In helping to educate people about how robots can support our work, YuMi has paved the way for robots to be used in workplaces and factory floors worldwide.”

To help continue the revolution started with the launch of YuMi, ABB unveiled its single-arm YuMi robot in 2017. ABB’s most agile and compact seven-axis collaborative robot can be mounted on tabletops, wall or ceilings, and is designed to offer flexibility in an expanding range of applications.

“Over the past five years both our dual-arm and single-arm YuMi robots have tackled misconceptions that have hindered the adoption of robots, by demonstrating the wide range of benefits they can bring and by making them as easy as possible to use and apply to different types of processes,” said Andie Zhang, Global Product Manager - Collaborative Robots for ABB Robotics. “Customers tell us that the great thing about YuMi is that people don’t find it intimidating. Because it has human-like features, people feel comfortable next to a YuMi robot. We’ve also found that YuMi tends to be quickly accepted as part of the team when introduced into manual production lines as it tends to be used for boring and repetitive tasks, freeing the operator to perform more varied and interesting jobs.”

YuMi has market-leading lead-through programming function built-in, making it easy for anyone to move the robot arms into required positions for their application. In addition, ABB’s new Wizard easy programming software helps to further simplify the process of creating a robot program, by offering an intuitive, graphical, drag-and-drop interface, which anyone can use without special training.

“With YuMi, users can start small, tackling the tasks that are the quickest and easiest to automate, and then use the experience and confidence they have gained to find ways to apply automation to other parts of their operations. Some customers have even purchased one without a specific application in mind,” added Andie Zhang. “They simply wanted to explore what is possible with collaborative automation with their production team.”

For more about YuMi, visit the ABB website here.