Prior to its investment in an EffiMat storage and retrieval system, OFI Testing Equipment (OFITE) had eight employees manually selecting sales and work orders. At times people were waiting for an aisle to clear so they could get the parts they needed and it was the same, in reverse, for re-stocking. 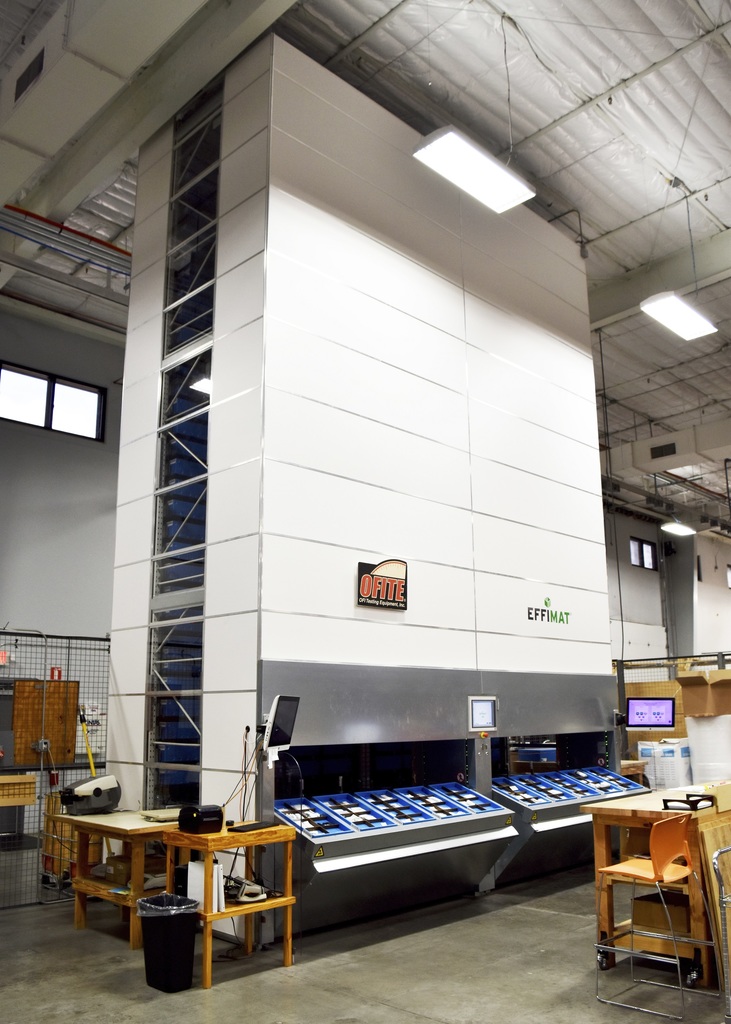 Instead of adding shifts or expanding the building to improve efficiency, OFITE decided to automate the selection process and clearly the most practical solution was to use existing floor space optimally and think ‘vertical’.

The initial plan was to invest in a traditional vertical lift module (VLM) but then Dan Wax, Director of Supply Chain and Logistics at OFITE, saw an EffiMat system at a trade show and immediate grasped the time and cost saving potential of its patented Box Mover Technology.

“To say that I was impressed is an understatement,” he said. “I even took a sales engineer representing a traditional VLM company to the EffiMat stand to ask if his machine could do the same.”

The main difference between a traditional VLM and an EffiMat is its efficiency when picking multiple parts. If an operator has a kit of parts to produce and each is located on a different shelf, he or she would have to wait for each individual shelf to be presented, typically taking around 60 seconds every time. Occasionally, the operator might get lucky and find two of the required parts located on the same shelf.

EffiMat, available in the UK from RARUK Automation, stores parts in individual boxes and allows the user to select up to five boxes to be presented simultaneously. Even though the cycle time is slightly longer, at 80 seconds, efficiency is many times greater as each cycle delivers five products. Typically, up to 250 boxes/picks per hour can be achieved and boxes can also be sub-divided to further enhance productivity.

This capability was a clear vote-winner for OFITE management but the company was also keen to reassure its employees that such an investment would benefit them too.  As a result, OFITE arranged visits to other EffiMat installations so staff could see for themselves how the EffiMat improves the working environment and reduces the tedium of order picking.

Now installed, the OFITE EffiMat is used for storage and handling of smaller and expensive parts inventory used to fulfil direct sales and work orders to build finished products. It is interfaced with the company’s ERP system for order processing and is currently responsible for more than 3000 part numbers.

Three people operate the EffiMat at any one time which means other order picking staff can be deployed to different tasks. Also, the company has gained a lot more open floor space thanks to vertical storage, which is now used for collating large orders.

Greater efficiency and cost savings have resulted from this investment and Dan Wax confirms EffiMat has become an essential part of the company. He said: “It is rewarding that the EffiMat is one of the stop-off points for visitors to our factory. It wows people.”