Festo gives the future of safe automation a hand 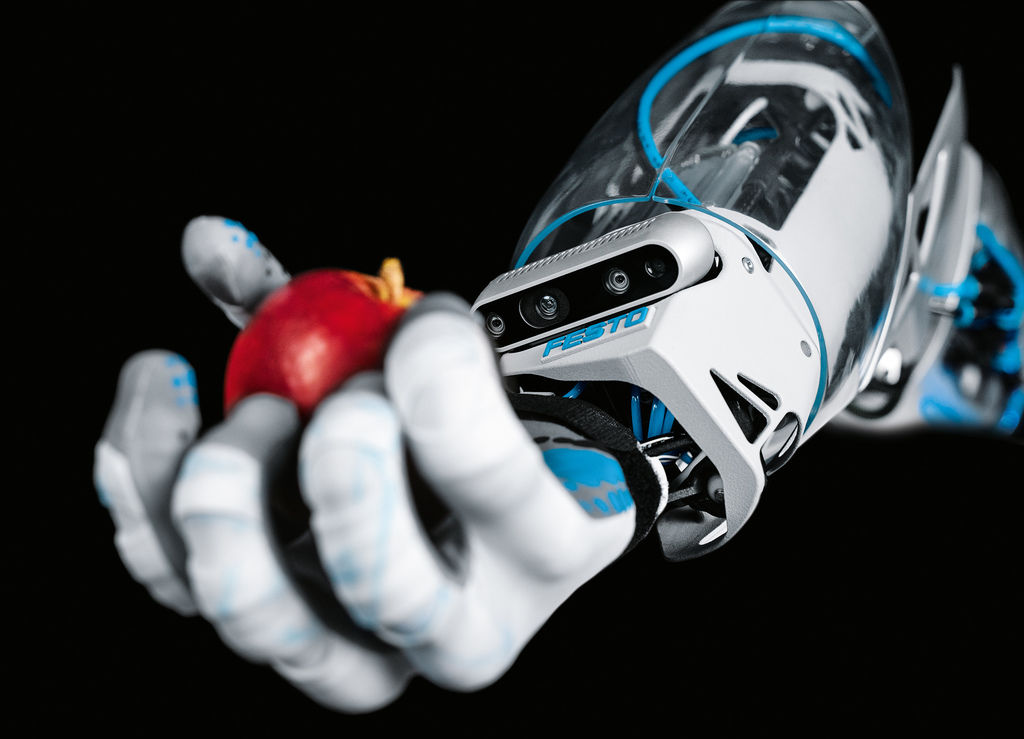 The entire system has been developed in collaboration with ETH Zurich. It has a modular design consisting of three subsystems: a mobile robot, an electric robotic arm and a pneumatic gripper – the BionicSoftHand 2.0 – an earlier version of which was first presented by Festo in 2019. It uses a combination of compact valve technology, sensors, electronics and mechanical components integrated in the tightest of spaces in order to emulate the movements of a human hand.

BionicSoftHand 2.0 wears a tactile glove with force sensors on the fingertips, the palm and the outer sides of the robot hand. This allows it to sense the nature of the item to be gripped, and to adapt its gripping force accordingly – just as the human hand does. Thanks to a 3D-printed wrist with two degrees of freedom, the hand can also move both back and forth as well as to the left and to the right. This means that gripping smaller objects is now possible. In addition, the hand has a depth camera on the inside of the wrist so it can visually detect the objects to be gripped – even if these are partially obscured. The information is processed by a neural network, which has been trained in advance with the aid of data augmentation. Once the hand has been correctly trained, it uses the intelligence gathered to assess objects.

The system would be perfect for differentiating good product from bad product, or for use as a personal assistant: for example as a service robot helping in assembly or assisting workers in carrying out ergonomically monotonous tasks. It could also be used in environments where people cannot work because of hazards or restricted accessibility. This includes maintenance or repair work, data measurements or visual inspections. It is also possible to imagine mobile robots carrying out tasks in areas where there is an increased risk of infection: delivering medicines to hospital patients, supporting the delivery of care in old people’s homes, or waving ultralight sterilising wands within wards.