With the Nordac PRO SK 500P Nord Drivesystems claims to have launched a state-of-the-art control cabinet inverter with the latest component technology and ultimate levels of functionality, connectivity and modularity. 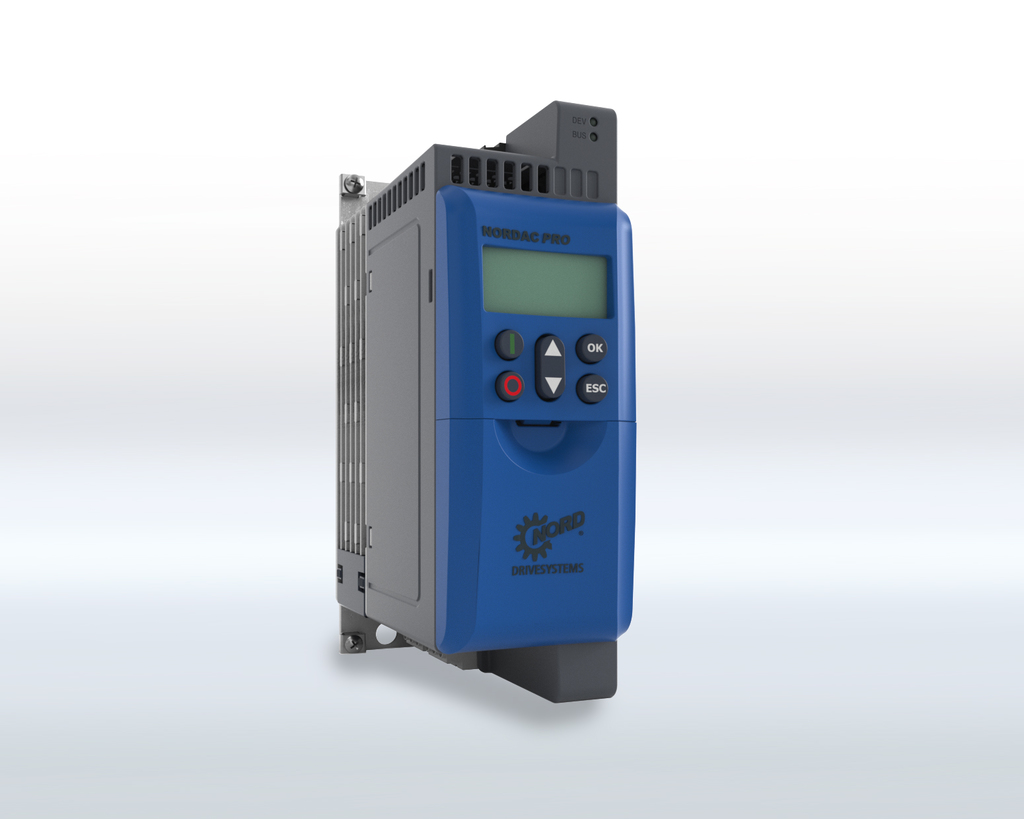 The inverters have an impressive number of interfaces for communication and field buses, innovative features as well as a number of extension possibilities, so that they can be easily integrated into all automation architectures.

With their various versions, the new frequency inverters from the Nordac PRO family can be optimally assigned to a wide range of application requirements. The functions of the modular series can be extended by plug-in control, safety and option modules. Users also benefit from a particularly compact design in book-size format. The slim design saves space in control cabinets and enables side-by-side installation. The inverters are available in a power range from 0.25 to 5.5 kW.

This latest addition to the family carries a large number of interfaces. As well as the standard CANopen interface, a multi-chip for Industrial Ethernet enables the use of the most important real-time Ethernet standards via a single interface. Whether for ProfiNet, EtherNET IP, POWERLINK or EtherCat, the required protocol can be easily set by means of parameters. The devices can also be parameterised via the USB port without an external power supply (programming in the box). The SD card slot for saving and transferring parameters is also a novelty. In addition, five or six digital and two analog inputs, two digital and one analog outputs, two potential-free multi-function relays, an HTL /TTL incremental encoder interface as well as a universal encoder interface are available.

As with all Nord frequency inverters, the Nordac PRO SK 500P series is equipped with a powerful PLC for functions close to the drive. The precise current vector control can provide the optimum torque in various load and speed situations and guarantees operational reliability with high overload reserves, which users need e.g. for starting. The inverter operates either open-loop or closed-loop and can operate both synchronous and asynchronous motors. The integrated brake chopper for 4-quadrant operation is a part of the basic equipment for the entire series, as is motor brake management, which is important, e.g. for lifting gear applications. Nord supplies the inverters with integrated STO and SS1.

The new Nord solution for control cabinet installation is available as a machine inverter (SK 500P) and as an application inverter (SK 530P and SK 550P). In contrast to the fully equipped application inverter, the machine inverter is an economically optimised device with a reduced number of interfaces, however still performs functionally demanding tasks such as integrated PLC, closed-loop control and positioning. The SK 530P also features an SD card slot, USB interface, encoder interface and the possibility of expansion via an optional SK CU5 module. On the other hand, the SK 550P is the first choice for connection to control systems via Industrial Ethernet.