KEB Automation has supplied a variety of drives and control equipment to a UK-based machine builder for use on special purpose cutting machines for stone tiles and roof slates. KEB provided a complete solution from a single source and provided engineering support all the way through the machine design and build process. 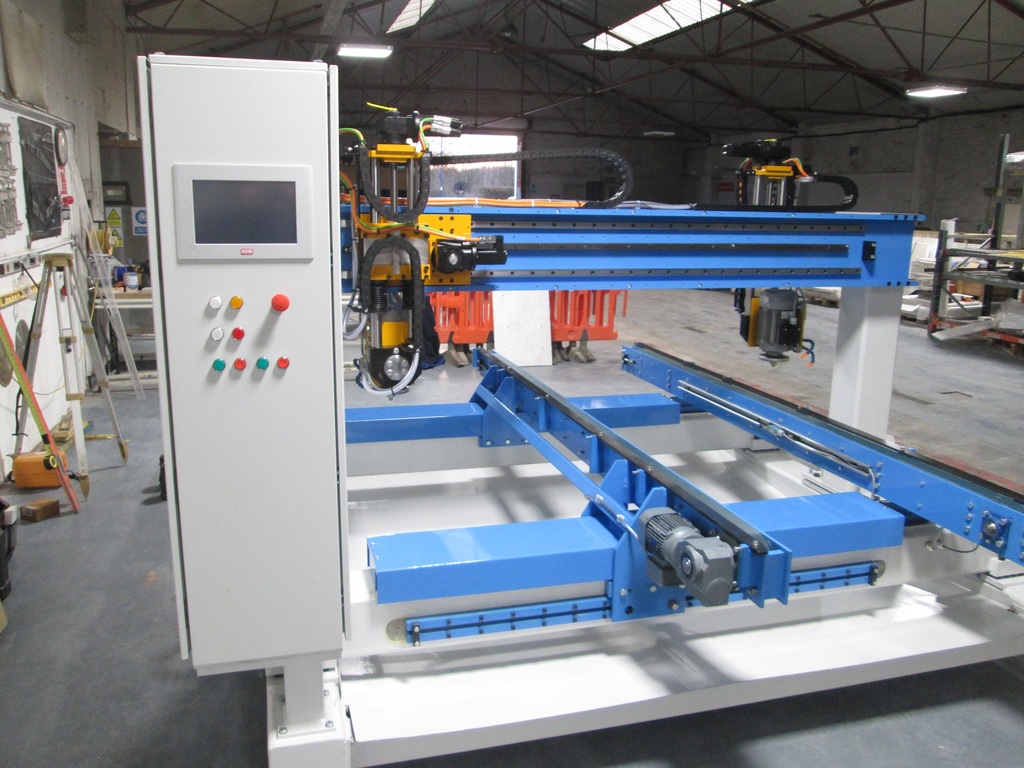 Both types of machine required a range of drives and control equipment and so Alex Wilson conducted a thorough supplier evaluation process. “In the end, I chose KEB Automation, as they were able to provide all the drives, controllers, gear motors and HMIs from a single source and were willing to provide engineering support through the machine design and build phases, which you don’t always get from other suppliers,” adds Wilson.

For the 5-axis stone facade cutting machine, KEB supplied four COMBIVERT S6 drives, four servo motors, two gear motors and a COMBIVERT F5 inverter. All the control equipment is housed in a control cabinet which has an integrated HMI touchscreen display from KEB.

With dimensions of approximately 3m square by 2m in height, the machine comprises two conveyor bands with a bridge over and two 4kW powered saw blades in the X-Y axis. As the stone is moved down the conveyor, the saw blades can be programmed to add chamfers and slots in the stone. Each saw blade has two axes of motion (up and down/in and out). The machine is fairly low speed (up to 1.5 metres per minute), but is precise and accurate. Two KEB gear motors drive the conveyor bands. Four KEB servo motors (two per head) move the cutting heads. A KEB COMBIVERT F5 inverter controls the two geared motors for the conveyors. The machine is totally enclosed by protective guarding. All control equipment is housed in a control cabinet with KEB touchscreen HMI.

As Wilson explains: “All the control programs were written by KEB using its COMBIVIS software. This meant we had KEB’s support through the design and build stages of the project, which was really crucial for us. We delivered the machine to the customer in February 2019, who is extremely happy with it. Since installing the machine, the customer has reported no issues at all.”

The two identical slate cutting machines, which have dimensions of around 2m x 1m square, are inclined at 30 degrees and comprise of a pair of conveyors, each driven by a KEB servo gear motor. The conveyors pass over two cutter blades, which cut (‘hammer’) the slate to size. KEB COMBIVERT S6 drives control the position of the upper cutting blades, with two KEB servo motors driving the cutter heads. All controls for the two machines are housed in a single control cabinet with operator control joysticks

Wilson concludes: “On both machine projects, I was particularly impressed with KEB in terms of their technical capabilities and engineering support. They have been very helpful and have always responded promptly when I’ve needed support on resolving any issues. I look forward to working with KEB on future machine projects.”

Compact, flexible and powerful, the COMBIVERT S6 range of servo drives is suitable for a wide range of highly dynamic servo applications, including highly automated, safety-oriented machines. The drives provide optimal motor control in real time, integrated safety functionality and are designed in a compact, space-saving book-style format for easier mounting in control cabinets where space can be limited. The COMBIVERT S6 range is 100% in-house designed and built by KEB. The drives are available in two different enclosure sizes across motor power sizes from 0.75kW up to 5.5kW or electrical currents from 2.6A to 12.0A, with overload to 250%. The drives can be customised with a variety of design options to suit the specific application. Safety functionality can be selected from three modules to suit the requirements of the machine.