While aerospace has long been a major lifeblood for the UK manufacturing sector, recent years have seen a perfect storm of investment, R&D and new technologies drive the sector into new heights. One research facility at the forefront of this relentless pursuit of progression is Cranfield University’s Aerospace Integration Research Centre (AIRC), which has turned to FANUC’s collaborative robots to boost productivity and cut cost through greater human interaction 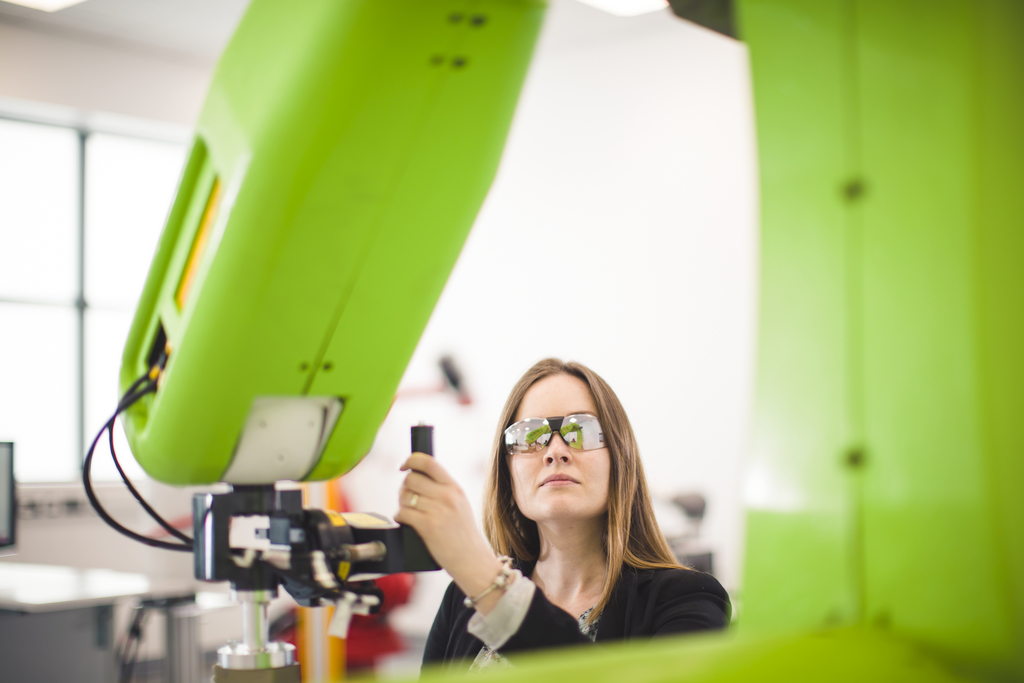 Opened in 2017, the AIRC was co-founded by the university alongside Airbus and Rolls-Royce supported by the Higher Education Funding Council for England. Its aim is to seamlessly blends academia with industry, and focuses on all aspects of integration in aerospace, including power plant, sub-assemblies, and airframe structure. With a firm focus on taking concepts from theory to flight demonstration, the site’s laboratories connect the University’s ‘land-side’ ground-based research with the AIRC’s ‘air-side’ flight research.

Within the AIRC’s extensive facilities lies one area dedicated to research into human-robot collaboration: the Intelligent Automation Laboratory.

“Certainly for the UK aerospace industry, there is a big drive to reduce cost and increase both production rates and efficiency,” begins Professor Phil Webb, Professor of Aero-Structure Design and Assembly at the AIRC.

“Currently there is a low uptake of automation within the sector, yet with a number of emerging challenges on the horizon – such as new materials and possible aircraft geometries – the traditional way of building aircraft is going to become much more manual, and much more difficult to do both effectively and profitably.”

He continues: “The work that we do in the Intelligent Automation Laboratory is focused around using automation in new and less-common applications. The underlying principle we’re really interested in is how to get more people working closely with robotics and automation.”

The aerospace sector is not the only UK industry which has been slow to respond to the advent of automation. In fact, according to the International Federation of Robots (IFR), the UK as a whole has just 71 industrial robots per 10,000 workers in the UK. That positions the UK behind 14 other European countries. In contrast, Germany – Europe’s most automated country – has 309 units per 100,000 workers.

No need for guarding

One of the more commonly-quoted barriers to the uptake of industrial robots has been guarding, and the extra space – and cost – this can add to a cell. However, Phil and the team at the AIRC have overcome this hurdle by turning to collaborative robots, which allow humans and robots to work alongside each other in a safe and productive way, without the need for guarding.

“Normally people put a steel cage between the two and never the twain shall meet,” adds Phil. “Here, however, we’re interested in how to use the best capabilities of both humans and robots, whilst maintaining safety and making the human operator feel comfortable, which again is often neglected.”

While collaborative robots are not a new phenomenon, many robots in the market have maximum payloads no greater than 15kg. Sourcing a robot that could handle the larger workpieces more commonly found throughout the aerospace supply chain was proving to be challenge for AIRC team, until they encountered FANUC’s CR-35iA: the world’s only collaborate robot with a payload of 35kg.

Phil explains: “I started working with collaborative robots nearly 15 years ago. I was driven by the mission that there was only so much we were ever going to do with a conventional robot. Ultimately, you have to keep the person in the loop as they have the inherent skills that we are a long way from recreating with robots.
“The FANUC CR-35iA is the robot I’ve been looking for since I started doing this. The opportunity to work without physical guarding, and handle workpieces up to 35kg, means you can work with some really meaningful components in this industry. Crucially, it also gives you the capability to do so safely.”

With a maximum payload of 35kg and reach of 1813mm, the CR-35iA is a fully-functioning industrial robot. However, it benefits a series of integrated sensors and highly responsive ‘touch-to-stop’ reactive functionality, meaning that if the robot’s arm comes into contact with a fixed object or person, it gently stops and retracts. A safety system ensures that the robot stops at a maximum force of 150N, however this can be reduced even further if required.

The AIRC’s FANUC collaborative robot is treated with the same approach to resource planning as the team’s human staff, with each task effectively broken down into whether it is more appropriate to be undertaken by the CR-35iA, or a human.

Phil continues: “A lot of the work we’re particularly interested in is around installing large components on aircraft, on structures such as wings. These components are quite large, heavy, and awkward to manually move about. Traditionally, a lot of tooling is used to hold parts in position. This, along with other systems or operators, adds both time and money on the project. If we can eliminate that by using a collaborative robot, such as the CR-35iA, then we can significantly reduce the time and cost of that process.

“Robots are very good at positioning things accurately, and moving hard and heavy weights repetitively. Therefore we are using a robot – supplemented by metrology systems – to do the accurate positioning, while harnessing the skill and dexterity of the operator to do the installation tasks such as connecting up linkages, hydraulics, electrics and other systems.”

While it is still comparatively early days for the wholesale use of collaborative robots throughout the aerospace sector, the AIRC is showing no sign of slowing down.
“We have got a number of projects in the pipeline, and are continuing to look for more strategic funding to build our capability and expertise here so we can push this technology forward even further. However, one of the important areas we need to work on is in the regulatory risk assessment and safety assessment side, because that is probably the biggest single barrier. There are solutions like the CR-35iA that are pushing the technology angle, but it’s still that regulatory and acceptability angle where more future research needs to be done,” concludes Phil.

“Ultimately, Aerospace is very competitive at the moment. There’s a lot of new entrants, with a lot of demand building in the industry – you only have to look at the order books out there. R&D, therefore, is paramount, and I believe we are finely placed to help drive UK aerospace forward.”