A renewed urgency for energy

As energy price hikes hit the headlines, the issue of renewables has never been more pertinent. CDA's consulting editor, Andy Pye, takes a look at the sector and some of the measures being used to help achieve sustainability

Conventional energy industry is heading for global crash, and needs root-and-branch reform, according to green energy entrepreneur Jeremy Leggett in his newly published book, The Energy of Nations: Risk Blindness and the Road to Renaissance.

Much of "Big Energy”, he says, is guilty of an enculturated risk blindness that, unless action is taken, will lead to an inevitable global crash.  As the World Energy Congress opens in South Korea, Leggett argues that the energy industries are about to repeat the behaviour traits of the financial sector, and on multiple fronts.

It all points to a greater role for renewables – and fast. The Netherlands, with its history of challenging and harnessing the elements, recognises more than most that it is necessary to counter the impending instability caused by the increasing power surges of electricity from wind turbines and solar cells. Large numbers of locally installed batteries – smart grids – will be needed to accommodate the increasing fluctuations in the electricity grid that are inherent to sun and wind energy. On windy and sunny days, the energy surplus can be stored temporarily in batteries near the wind generators and solar cells. The energy can then be consumed during the nights or following days (or be supplied to the main network) when it is cloudy and the wind has died down. The alternative would be an updated infrastructure with many thousands of extra kilometres of (thick) cables to the highest voltage level in order to prevent overloading.

If not, says Stefan Nykamp at the University of Twente, the Netherlands will be confronted with the major problems that are currently visible in Germany: looming blackouts, the shutting down of wind generators or dumping of (almost) free green electricity in neighbouring countries because of the threat that the network will become overloaded. These are the current problems in Germany, which already generates a quarter of its energy from renewable sources. Nykamp says that the Netherlands – and by implication other countries - must learn from this and invest heavily in a stable network for a future with the generation of at least four times as much green electricity.

Intertwined with alternative energy sources is energy conservation. Building control systems can optimise energy consumption and energy bills by producing heat or cold at times when energy price is low, and storing it in inertia depositories so that it is ready to be used upon request. These rely on a series of sensors, measuring for example the temperature, humidity, lighting level, and on various actuators, such as valves engine and lighting regulators.

Though there is no single strategy for implementing control systems, Incorporating buildings’ automation within the architectural design and installations’ planning stage is key to effective control systems. One approach involves using data orchestration, where data coming from different sources are combined into a single output. Another includes binding the results of the probes with the dynamic modelling of the building through a so-called grey box. Other approaches involve a possible additional control feature to ensure high energy efficiency and users’ comfort, especially in office buildings, is to include access or presence control systems, according to Kristian Fabbri, adjunct professor of technical environmental physics at the University of Bologna.

Users can also actively participate in improving energy efficiency through a feedback system informing them of the impact of their actions. Ultimately, Fabbri concludes, control systems will be more and more dynamic with energy consumption information regularly shared through social networks.

Lighting currently accounts for approximately one fifth of the world's electricity consumption. Here, smart lighting has substantial energy-saving potential. When the required amount of light can be regulated more accurately using energy-efficient LEDs, as much as 80 % of the energy required for lighting could be saved.

Accordingly, demand for smart lighting is expected to boom over the next 10 years. The first-generation smart lighting systems that are currently available on the market are mostly designed for commercial use, and they can be integrated with building automation systems. More wireless lighting systems are becoming available that can be controlled via devices such as a mobile telephone.

According to Principal Scientist Janne Aikio at the VTT Technical Research Centre of Finland, the lighting systems of the future could be multi-purpose devices not dissimilar to smart phones. Smart lighting technology could also be used to survey surroundings, transmit information, reflect moods and make our lives more comfortable. It will enable the direction, power and colour of lighting to be adjusted automatically according to whether a room is being used for watching television or eating dinner and according to where people are in the room. 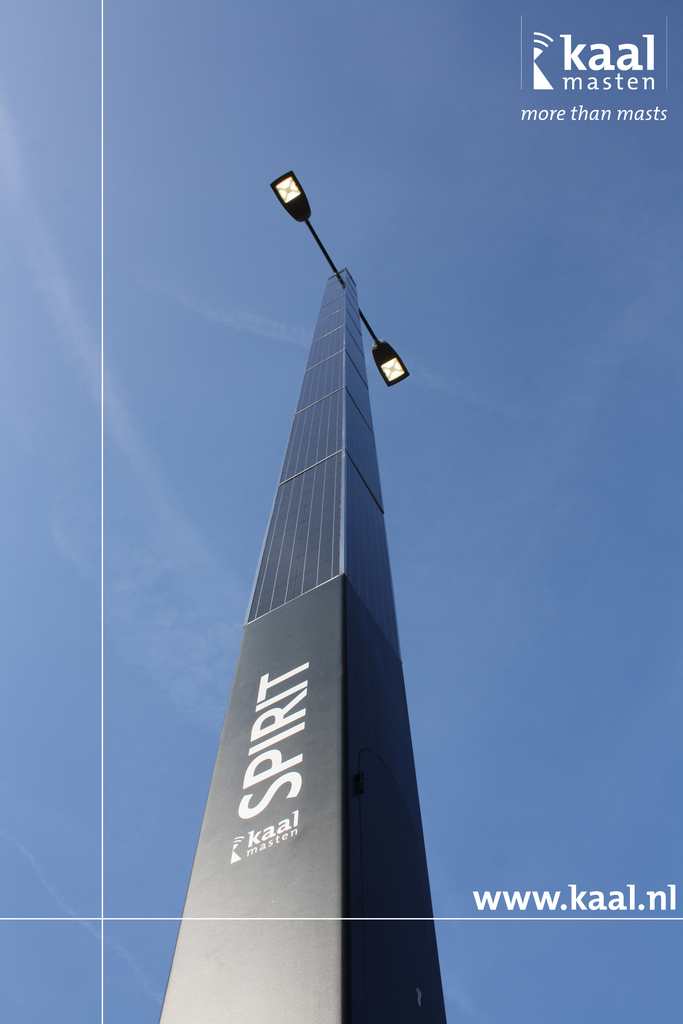 Kaal Masten’s Spirit is claimed to be the world’s first solar-powered lighting column that does not use mains power and exclusively uses solar energy and LED technology. With cabling not required, Spirit columns can easily be installed at locations that do not have an electricity connection, such as motorways, rural roads, car parks and mountain roads. The height of the column and the number of solar modules can be tailored to the situation, up to a maximum height of 18m.

In recent years both the efficiency and cost of commercial solar panels have improved but they remain expensive compared to fossil fuels. Most solar cells used in homes and industry are made using thick layers of material to absorb sunlight, but have been limited in the past by relatively high costs. Many new, lower cost designs are limited as their layer of light-absorbing material is too thin to extract enough energy.

Scientists at Imperial College London have demonstrated that rows of aluminium studs can, by trapping light inside the absorbing layer, help solar panels extract up to 22% more energy from sunlight than those with flat surfaces.

At the microscopic level, the studs make the solar panels look similar to interlocking LEGO building bricks. Rows of aluminium cylinders 100nm across are attached to the top of the solar panel, where they interact with passing light, causing individual light rays to change course. More energy is extracted from the light as the rays become effectively trapped inside the solar panel and travel for longer distances through its absorbing layer. 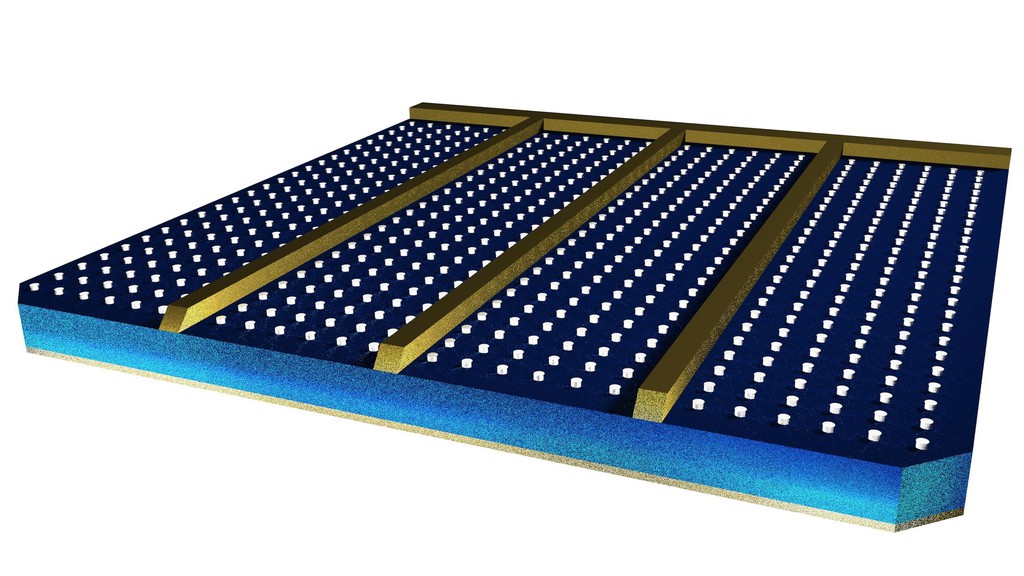 The future success of this technology opens up the possibility of making flexible solar panels that could be applied to any flat or curved surface, which could be used to power everything from domestic appliances to portable electronics like laptops.

Research by Nanyang Technological University (NTU) scientists is working on a solar cell made from organic-inorganic hybrid perovskite materials. It is about a fifth the cost of current thin-film solar cells, due to a simpler solution-based manufacturing process. A commercial prototype of the perovskite solar cell is being made in collaboration with Australian firm Dyesol. 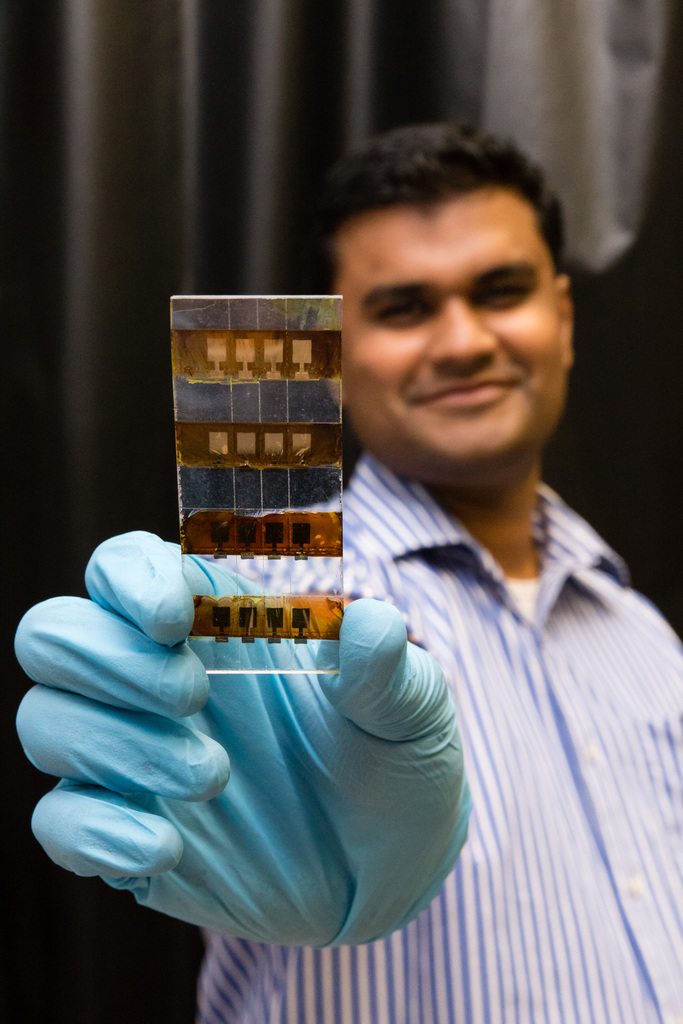 Perovskite is known to be a remarkable solar cell material as it can convert up to 15% of sunlight to electricity, close to the efficiency of the current solar cells, but scientists did not know why or how. The high sunlight-to-electricity efficiency of perovskite solar cells places it in direct competition with thin film solar cells which are already in the market and have efficiencies close to 20%.

Another international team of scientists, led by researchers from the Universities of York and St Andrews, has developed a new method to increase the efficiency of solar cells. The new approach achieves highly efficient broad-band light trapping in thin films, with more light captured in the film in order to maximise absorption and electricity generation.

The new method builds on research into a class of materials known as quasi-crystals, which offer advantages in terms of the spectrum of light they are able to capture.

However, the problem with these structures is that their properties are difficult to tailor towards specific applications as they lack the design tools available with periodic structures such as regular gratings. To solve this problem, the researchers created a new structure called a quasi-random structure, which combines the rich spatial frequencies associated with quasi-crystals with the high level of control afforded by periodic structures.

"Other than solar cells, our design can also be used in many light trapping areas, like LED and DFB lasers,” said Dr Juntao Li, from the State Key Laboratory of Optoelectronic Materials and Technology, Sun Yat-sen University, China.

The construction of offshore wind turbines requires driving large monopiles into the seabed. Up to 700 tons in weight, 75m long, and 7m in diameter, specialised jack-up vessels host large cranes that carry and lower the piles into the water before hammering them into the seabed at depths of up to 40m. The piles then serve as the foundation for installing wind turbine towers. 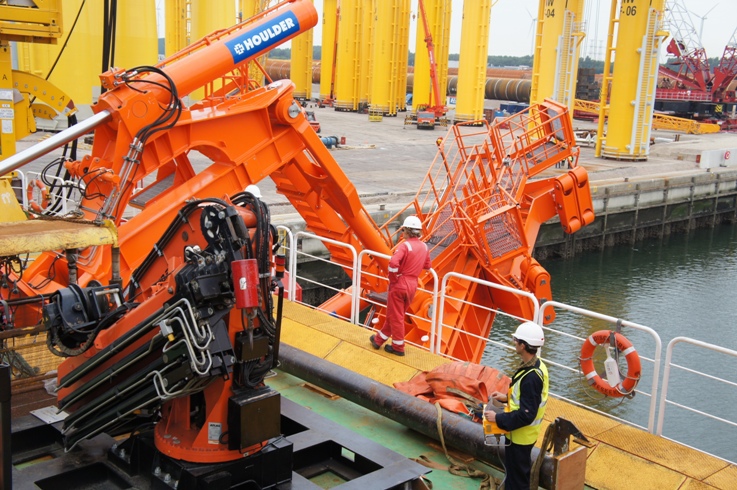 Houlder is a UK business specalising in engineering and consultancy for the Marine, Oil & Gas and Renewable Energy sectors. Three main hydraulic cylinders actuate each gripper arm. One cylinder raises and lowers from the stowage (vertical) position and the other two provide motion in the X-Y plane. Keeping the pile vertical while driving it with a hydraulic hammer poses a serious challenge, especially when there are major currents and waves. Houlder wanted to develop a pile guidance tool to hold and maintain the pile’s vertical position.

Engineers at Industrial Systems and Control (ISC) were involved from the outset of this project. They used modules of NI LabView software (Real-Time, FPGA, MathScript RT, and Touch Panel) to implement the control software. Before connecting to the actual system, they tested the algorithm functionality using a detailed software emulator. They then used NI CompactRIO hardware to develop the complete control system for the gripper arm. They also designed an algorithm combining the forward and inverse kinematics of both gripper jaws to compute the hydraulic cylinder lengths required to move the arm in a desired direction. 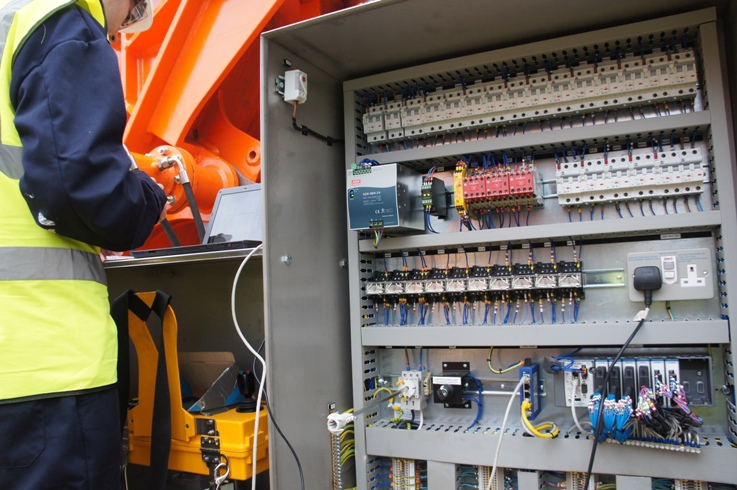 As soon as the gripper arm and its software was installed on the MPI Discovery, it set sail for the Humber Gateway Offshore Wind Farm to install four monopiles and transition pieces (the visible, yellow base of offshore wind turbines). When completed in 2015, the site will consist of 73 turbines.

Newly launched is the MasterTherm range of high efficiency heat pumps which use inverter technology not only on its air source versions but also for its ground source pumps. 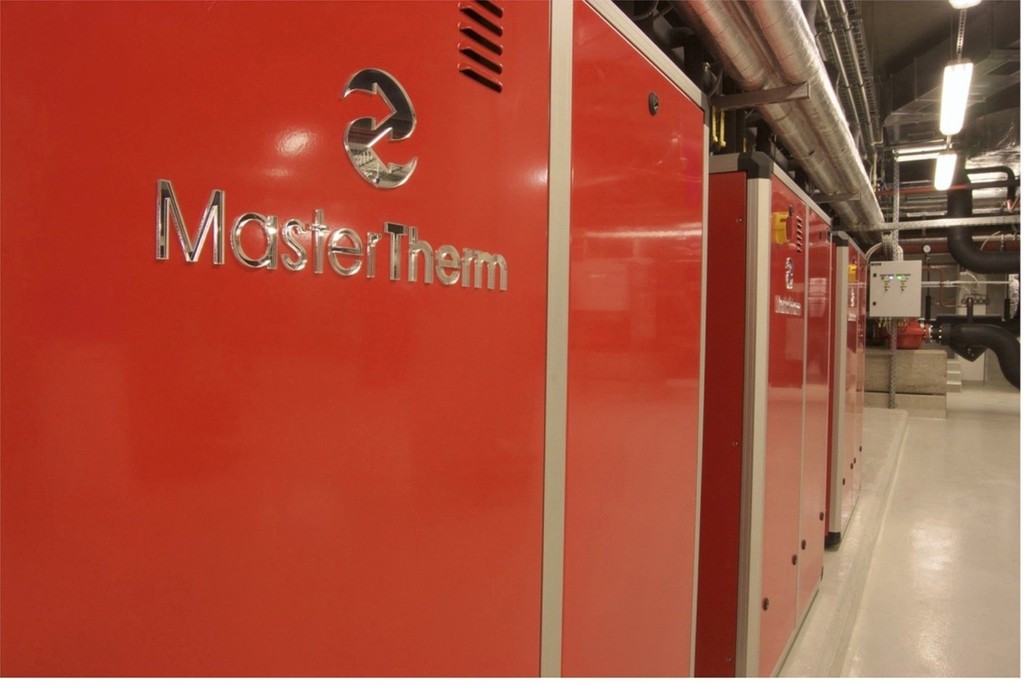 The inverter technology provide full modulation between 30% and 100% to match the building’s heat loss. This significantly reduces the number of on and off cycles, meaning that the compressor is hardly ever switched off, so avoiding high starting currents, high electricity costs and extending the product life. The variable output control from the heat pumps also eliminates the need for a buffer tank, reducing space requirements and cost.