As aviation becomes increasingly accessible in all parts of the world, future journeys will increasingly be made by air, particularly to and from emerging markets. 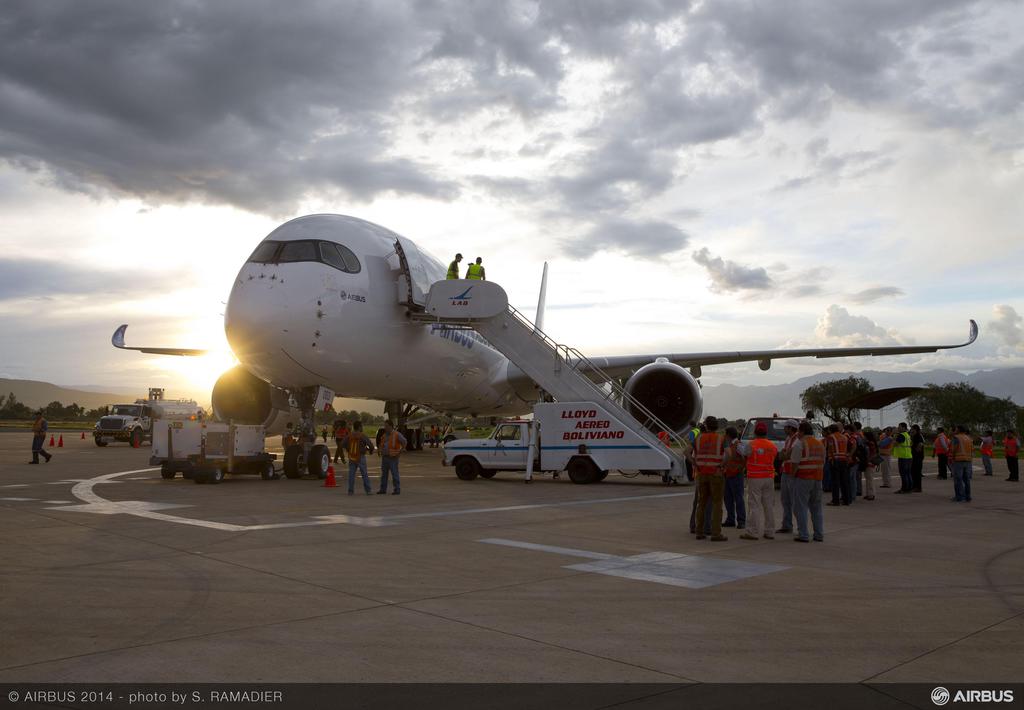 According to Airbus’ latest Global Market Forecast (GMF) in the next 20 years (2013-2032), air traffic will grow at 4.7% annually requiring over 29,220 new passenger and freighter aircraft valued at nearly US$4.4 trillion. With today’s fleet of 17,740 aircraft, it means that by 2032, the worldwide fleet will double to nearly 36,560 aircraft. Airbus forecasts a demand over the next 20 years for some 6900 new twin-aisle passenger and freighter aircraft. Therefore, it is vital for aircraft manufacturers to recognise the need for the sustainable development of air travel.

Boeing's latest market outlook similarly projects lusty global demand for new aeroplanes over the next two decades, driven by growth in China and the Asia Pacific. "We project that 14,350 of these new airplanes (41% of the total new deliveries) will replace older, less efficient airplanes, reducing the cost of air travel and decreasing carbon emissions," Boeing explains. "The remaining 20,930 airplanes will be for fleet growth, stimulating expansion in emerging markets and innovative airline business models.”

All of this is good news for potential exporters of automation equipment and UK manufacturers looking to make use of robotics. Mike Wilson, General Industry sales and marketing manager for ABB Robotics UK and Ireland believes that in the case of the UK robotic automation is key to helping UK aerospace manufacturers reach new heights.

UK aerospace companies have a well-proven track record across a wide range of fields, including engine design and manufacture and the manufacture of major aircraft components. This has been recognised by the UK Government, which is supporting a new National Wind Tunnel Facility (NWTF) that will keep the UK at the forefront of aerodynamic and fluid mechanics research. This was announced recently by David Willetts, Minister for Science and Universities. The total funding for the Facility is £13.3 million, with £10.7 million coming from The Engineering and Physical Sciences Research Council (EPSRC) and £2.6 million from the UK Aerodynamics Centre.

The National Wind Tunnel Facility will include seven wind tunnels spread across universities throughout the UK. For maximum UK benefit in the future, the UK requires a balance of academic and industrially-oriented facilities. To meet this need, EPSRC and the UK Aerodynamics Centre are working together to co-fund a portfolio of distributed, but co-ordinated, facilities so their usage can be optimised.

Companies such as British Aerospace and Rolls Royce are well-known players in the global aerospace industry, with their products being part of some of the world’s most famous aircraft. But Wilson says that conversations with various UK aerospace companies have revealed that many face a number of challenges that need to be overcome.

Whether it’s a new aeroplane for an airline or a new flight system for the latest jet fighter, aerospace equipment and components are not cheap. Consequently, as in any industry, demand can be detrimentally affected by changes in the amount that customers are either willing or able to spend. Another challenge is the development of new materials, such as composites, or the requirement for components to be reworked to include these materials.

Workforces must be flexible to cope with peaks and troughs in production. And the current chronic lack of engineering talent is a real problem. Finally, quality is an issue where production processes are governed by standard operating procedures.

Many of these challenges could be solved, either directly or indirectly, through further application of latest robotic automation. Modern robots handle a multitude of tasks and materials with minimal changes to set-up. Developments in offline programming, using software such as ABB’s RobotStudio suite, mean that is now possible to run a robot in a virtual process before committing it to the actual factory floor.

The A350 XWB project

The A350 XWB is an all new family of mid sized wide-body medium-to-long haul airliners designed to overcome volatile fuel prices. The A350 XWB saves up to 25% fuel burn thanks to its materials, aerodynamics, advanced systems and new generation engines.

Composites at Airbus have seen a step-by-step introduction that started with the A310 first rolled-out in February 1982. 53% of the A350 XWB's airframe is made-up of carbon-fibre reinforced polymer (CFRP) including Airbus' first carbon-fibre fuselage.

More than 20 years before an A350 XWB will need to be recycled, the process is already being developed: it is already possible to automatically dismantle a section of an aircraft and separate all composite material.

Airbus claims that with five additional years of technology development the A350 XWB benefits from simpler and often lighter systems compared to the 787. For example: two hydraulic circuits, as opposed to three, or a much simpler electrical architecture that required therefore less power.

A350 XWB aerodynamics are designed using advanced computational fluid dynamics methods proven on the A380. Variable camber and differential flap setting optimise the shape of the wing throughout the entire flight, providing complete load control and eliminating the need for heavy structural reinforcements.

The A350 XWB Final Assembly Line (FAL) has been set up close to the A330 final assembly line in Toulouse. Unlike Airbus’ current series programmes, the landing gear and systems are installed in parallel with the assembly of the fuselage, wings and tailplane, along with the first step in the cabin installation operations. The functional tests can therefore start earlier on the A350 XWB programme than they do for the other programmes.

The A350 XWB sections arrive at the FAL from the various Airbus sites in Europe already fitted out and tested, reducing the amount of work required on the systems in the FAL. When A350 XWB production reaches full capacity, the complete process, from the beginning of final assembly through to delivery to the customer, will take two and a half months, which represents a 30% time-saving compared with the other programmes. 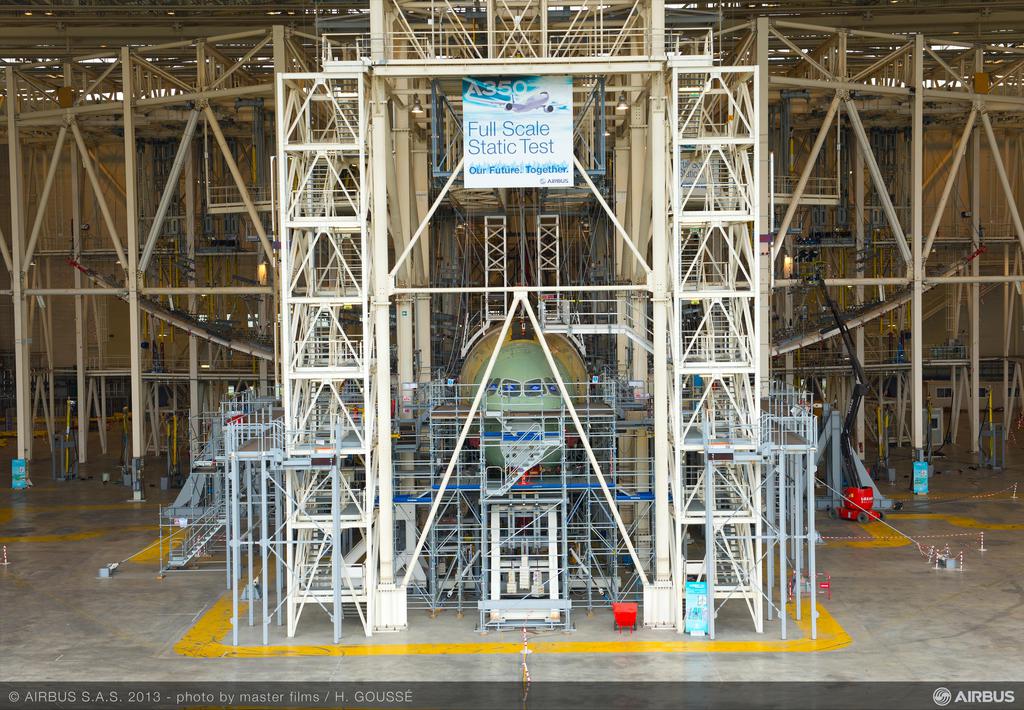 This test was performed on the A350 XWB static test airframe that was built specifically to demonstrate the structural integrity of the airframe. The strains induced into the airframe are measured and monitored in real time using more than 10,000 measurement channels. The huge volume of data recorded is analysed and correlated to the structural computer models which have been used to design the airframe.

Taking the heat out of space flight

Breakthrough heat exchange technology is the driving force behind a new generation of engines with the ability to operate in space and the earth’s atmosphere. Dr Robert Bond, corporate programmes director at Reaction Engines, says that the SABRE (Synergetic Air-Breathing Rocket Engine) is a new engine class that can operate as a jet and a rocket. Developed by Reaction Engines over the last 20 years, the engine can power aircraft to speeds in excess of 6000km/h (Mach five) in the atmosphere, and around 30,000km/h in space flight (Mach 25). 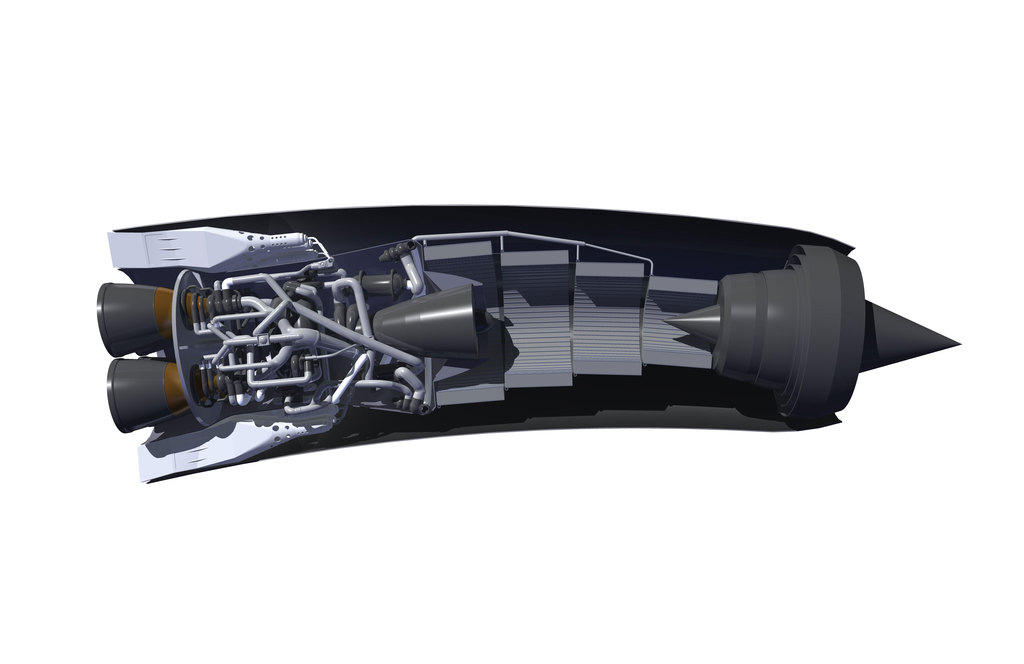 SABRE is at heart a rocket engine designed to power aircraft directly into space (single-stage to orbit) to allow reliable, responsive and cost effective space access, and in a different configuration to allow aircraft to cruise at high speeds (five times the speed of sound) within the atmosphere.

In the past, attempts to design single stage to orbit propulsion systems have been unsuccessful largely due to the weight of an on-board oxidiser such as liquid oxygen, needed by conventional rocket engines. One possible solution to reduce the quantity of on-board oxidizer required is by using oxygen already present in the atmosphere in the combustion process just like an ordinary jet engine. This weight saving would enable the transition from single-use multi-stage launch vehicles to multi-use single stage launch vehicles.

The engine has been made possible with the development of ultra-lightweight heat exchangers needed by aircraft to cool hot air entering their engines, as well as frost prevention technology. The SABRE engine is able to cool the incoming airstream very quickly and effectively, from over 1000C to -150C in less than 0.01s. They are extremely lightweight — approximately 100 times lighter than current technology — allowing them to be used for aerospace applications for the first time.

Reaction Engine’s work has the potential to revolutionise space travel 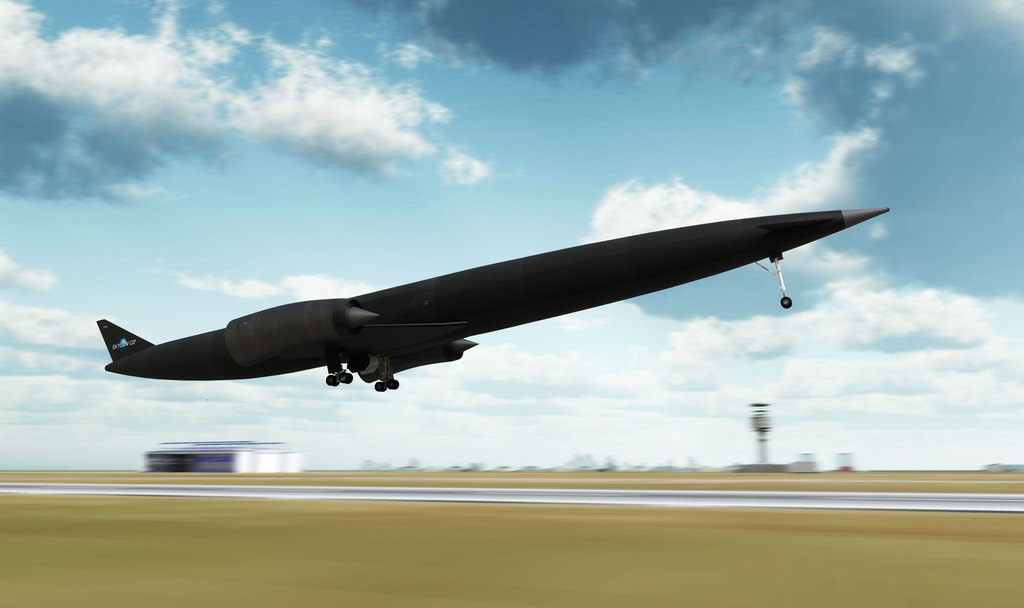 SKYLON uses SABRE engines in air-breathing mode to accelerate from take-off to Mach 5.5 which allows 1250 tonnes of atmospheric air to be captured and used in the engines, of which 250 tonnes is oxygen which therefore does not have to be carried in propellant tanks. At Mach 5.5 and 25 kilometres altitude the SABRE engine transitions to its rocket engine mode, using liquid oxygen stored on board SKYLON, to complete its ascent to orbit at a speed of Mach 25. In this space access application, SABRE engines need an operational life of only 55 hours to achieve 200 flights, significantly less than the ten thousands of hours needed for conventional jet engines.

Professor Naitoh of Waseda University's Faculty of Science and Engineering in Japan claims to have discovered a new compressive combustion principle that can yield engines with a thermal efficiency of 60% or more in applications including automobiles, power generation, and aircraft.

The new compressive combustion principle formulated by Naitoh is that, while thermal efficiency can be raised by reaching a high compression ratio, achieved through pulsed collisions of multiple high-speed jets of an air-fuel gas mixture at microscopic regions in the central area of a combustion chamber, expanded uses and ranges of application were attained with the further addition of three new measures.

It will open up the doors to new lightweight, high-performance aerospace vehicles

If the effectiveness of this principle can be confirmed through combustion tests, it will not only open up the doors to new lightweight, high-performance aerospace vehicles, but would also lead to prospects of next-generation, high-performance engines for automobiles. The maximum thermal efficiency of present-day gasoline engines for automobiles is of the order of 30%, falling to 15% in idling and low-speed city driving. Therefore, if automobiles could reach a stand-alone thermal efficiency of 60% or higher over a wide range of driving conditions, a fuel consumption superior to that of current hybrid system automobiles could be a reality.

These research results were announced in research papers at events including the spring congress of the Society of Automotive Engineers of Japan (JSAE), and the conference of the American Institute of Aeronautics and Astronautics (AIAA), both held in 2013.

More than 20 years before an Airbus A350 XWB will need to be recycled, the process is already being developed