A NEW Kawasaki robot has just been installed to replace an older version which completed an estimated 2 million fault-free lifting cycles for one of Ireland’s leading producers of pallets. 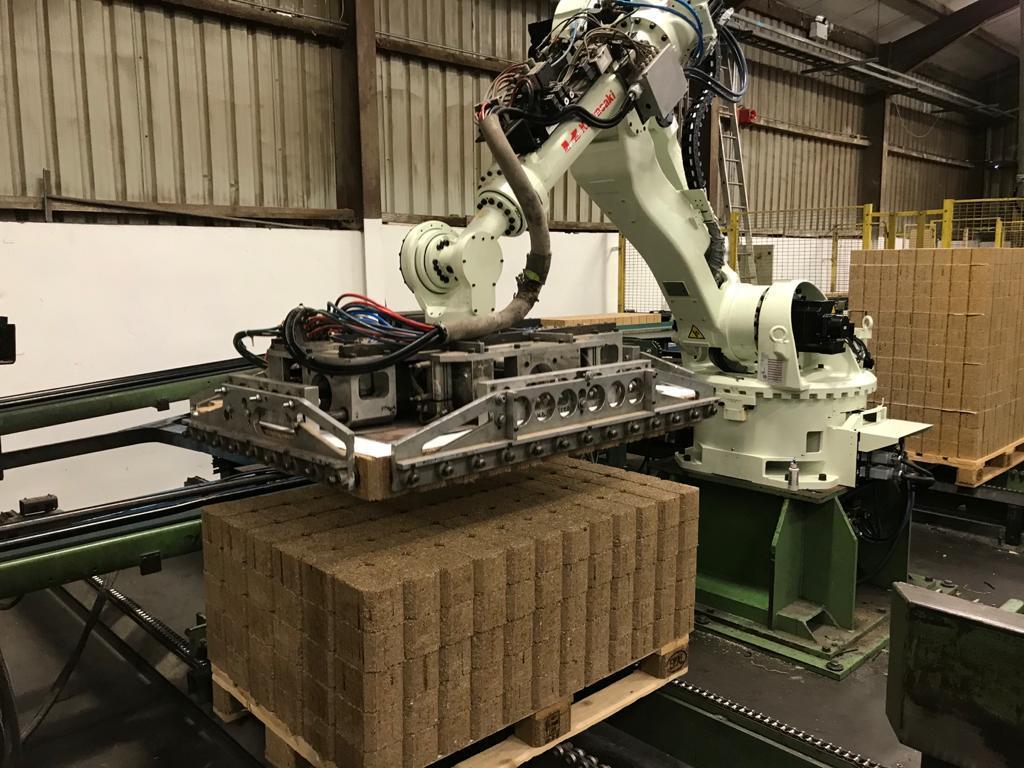 Mid Cork Pallets & Packaging has two sites, one in Clondrohid to the West of Cork and the other in Dunboyne near Dublin. Almost two decades ago a new Kawasaki robot was installed at the Cork production line, where it has performed perfectly without requiring anything more than routine maintenance. In mid-2020, mindful of its age, Mid Cork Pallets took the decision to replace the unit with a new robot rather than refurbish the old one. Having benefited from 20 years of exemplary service from the older Kawasaki robot, the business was keen to replace it with the latest version from the same manufacturer and in September of 2020 a brand-new Kawasaki ZX165U robot was commissioned at the plant.

Mid Cork Pallets & Packaging enjoys a hard-won reputation as a producer of premium quality pallets. Production rates are high with around 5,400 standard Euro-pallets manufactured each day. The company’s new Kawasaki ZX165U robot is tasked with moving compressed and moulded ‘air blocks’ which are used in the manufacture of these (and other) pallet products. Gripping trays of up to 96 blocks at a time, the robot uses side clamps to take them from a conveyor and then rotates them through more than 180° to deposit the trays direct onto a pallet assembly machine.

As with most factories, Mid Cork Pallets & Packaging can ill-afford unscheduled downtime, and this was identified as a critical element when discussing the replacement robot with Kawasaki Robotics and its approved Integrator on the project, KTM Systems. Peter Mason, managing mirector of KTM Systems recalls 'From the outset it was declared vital that the 72-hour installation and commissioning window provided by the customer was adhered to without fail. The time allocated covered the removal of the old Kawasaki Z-Series robot, installing the new Kawasaki ZX165U that replaced it, and line training for Mid Cork Pallets staff so that they could become operational immediately."

Mid Cork’s Martin O’Mahony observes: “Our choice of robot was a simple one really, given the excellent service record of the existing Kawasaki robot that had been with us for almost 20 years. We needed a replacement that offered even greater speed, and which also had the capacity to grow with our business given that output is forecast to continue increasing significantly."

Another consideration which both Kawasaki Robotics and KTM Systems were made aware of early in the discussions was ‘ease of use’ by Mid Cork Pallets production staff. They were well attuned to a certain way of operating the previous robot and were keen to keep the transition as simple and straightforward as possible.

“To this end, we used a bespoke, proprietary controller from Kawasaki Robotics, complete with its own standard software,” says Mason.

The robot and controller package were installed and commissioned well inside the agreed timescale and became operational on 30th September 2020 at the Clondrohid site. “Although we used the latest generation of controller hardware and software from Kawasaki Robotics, the in-house training provided by the installation team focused mainly on the differences between the old and the new. As a result, our key line staff found the transition seamless and quickly understood how to programme the new robot and get the best from it. We’re extremely pleased with our new Kawasaki robot and are expecting at least another 20 years of sterling service from this one too” concludes Martin O’Mahony.

Commenting on another successful installation for one of its most valued customers, Kawasaki Robotics sales manager Ian Hensman observes: “It is surprising how many of our older robots are still providing sound and fault-free service after decades of hard use. In this case our customer chose to replace and upgrade rather than refurbish. The latter would have been cost efficient, but the older robot may not have provided Mid Cork Pallets with the expansion capacity that their future growth clearly calls for. We can always trust KTM Systems to complete an installation on time, and in this case, we worked together with them to deliver a fully operational replacement robot well within the agreed timescale. It allowed Mid Cork Pallets to continue fulfilling its delivery promises to customers even when having the new robot installed."

Hensman concludes by pointing out that all new Kawasaki robots are now available on flexible and affordable leasing terms, allowing SME’s to protect their cash reserves whilst benefiting from the advantages of the most modern robot technology and capability.