Metsä Wood provides sustainable, premium-quality wood products. Wood shavings generated at the company's Boston site are used in the equestrian market; each year thousands of tonnes of Metsä Wood ‘Hunter’ Woodshavings are used for bedding in stables across the country. 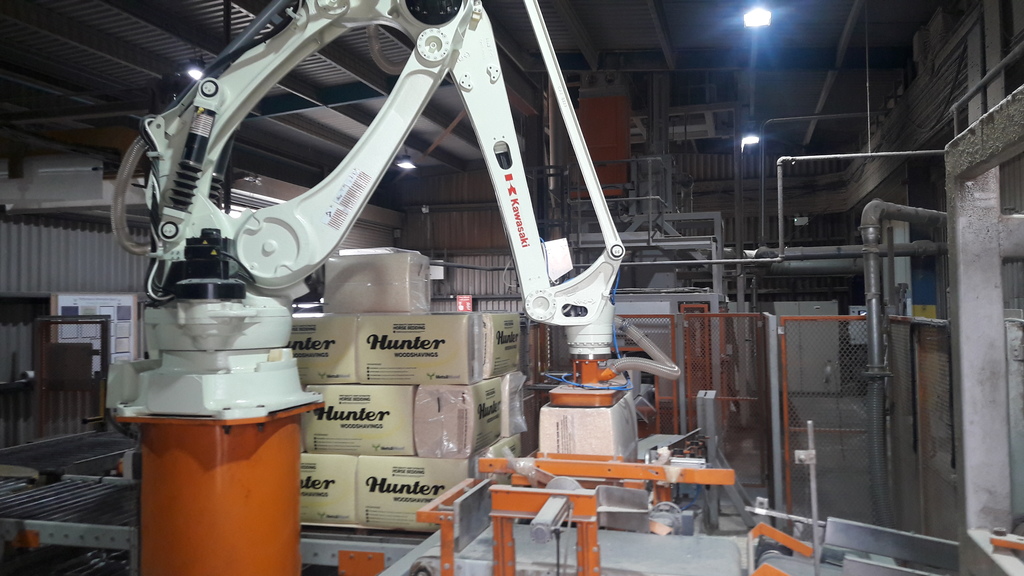 Once the loose shavings have been collated into bales using bespoke machinery at the Boston plant, the bales are removed from the line by a recently installed new Kawasaki robot and placed directly onto a 1200 x 1200mm pallet ready for dispatch. To ensure that the load is stable, the robot must also rotate the bales through 90° as it stacks, a task easily performed whilst transiting from pick-up to deposit.

The new robot, which was installed in August 2019, is a Kawasaki CP180L with associated HMI, which replaced an older robot, also a Kawasaki unit (a ZD130) that was originally installed at the plant in 2002. This machine had provided sterling service, and according to Metsä Wood Project Manager Andrew Burns, "Our records revealed that the Kawasaki robot installed in 2002 had completed 10,794,000 cycles, and it had performed superbly. We valued its reliability coupled with Kawasaki Robotics’ responsiveness and professional engineering approach. When we wanted a replacement for it in August 2019 there was only one place to go – Kawasaki - for another robot to last us the next 20 years or so."

In a typical working day, around one thousand 25kg bales are picked off the line and stacked safely using the necessary orientation changes programmed into the  Kawasaki CP180L. Removing the old robot and placing the new one onto its plinth was straightforward according to Mick Middleditch of Higham Ferrers based RJC Projects, which was were tasked with accessing the cell and swapping them over. “It was a trouble-free, like-for-like exchange that presented us with no problems or challenges," he said.

The installation, integration and programming of the newly installed CP180L was undertaken by industry experts KTM Systems of Liverpool. KTM Director Peter Mason has over 25 years in the business of robot installations and commissioning: "This job was identified as a critical one from the start. It was made clear that if this part of the manufacturing process was closed down for more than a few hours, production at the entire factory would come to a standstill. Our team set to work the moment RJC had placed the new machine in position and we had the new robot installed, programmed and commissioned well inside the stipulated window. It has been performing flawlessly since."

Kawasaki Robotics’ Ian Hensman observed: “When our original ZD130 robot was installed at the Boston Metsä Wood plant almost 20 years ago, it represented the state-of-the-art at the time and it served our customer extremely well. The Kawasaki CP180L that has replaced it is faster and more accurate, but uses less energy than its predecessor. The reach is longer (at 3.255m) offering greater flexibility for users, and it is easier to programme. Further, this latest model also requires less maintenance too."