Andy Anthony, MD of Monitran, explains how vibration level data is at the heart of a real-time asset monitoring system developed by Stork Food & Dairy Systems and the Institute of Industrial Research 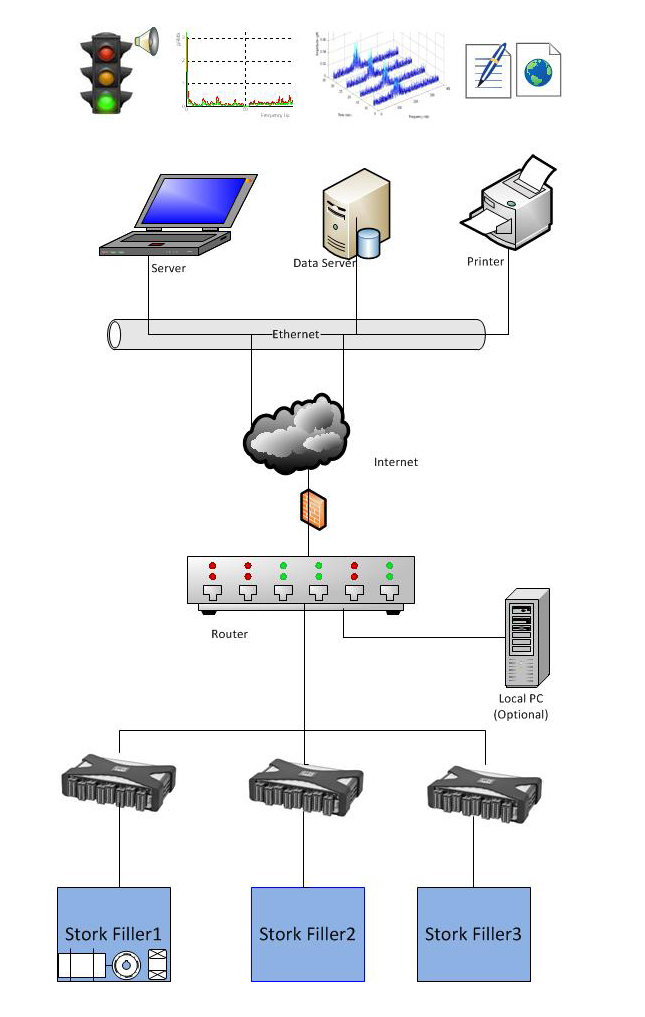 In the dairy industry, high-volume and high-efficiency are of paramount importance and most bottle filling machines are required to operate 24/7. There tends to be little spare capacity, so unscheduled maintenance and failures must be avoided as they can create a logistical nightmare. The cost of the downtime plus making alternative arrangements is estimated to exceed £50k.

Adopting a condition-based predictive maintenance (CBPM) strategy that includes the monitoring of vibration levels supports the better scheduling of maintenance work. If the CBPM strategy is built around real-time data, warnings can be given about impending failures.

Stork Food & Dairy Systems is a keen advocate of CBPM. It specialises in the development, production and supply of integrated processing and filling lines for the dairy and other industries. The company has 40 Dairyfill rotary fillers, which can fill up to 300 4-litre bottles per minute, in use with customers in the UK. Of these 40, four are connected to an advanced condition monitoring system called ‘Virtual Engineer’. It was developed under a project with the Institute of Industrial Research (IIR) and for which Stork received funding under the UK Government’s Knowledge Transfer Partnership (KTP).

Stork’s rotary fillers are complex machines with several gearboxes and bearings, and it was recognised early on in the project that Virtual Engineer should make extensive use of vibration level data. A challenge though was to determine how many vibration sensors should be used and where best to position them. Here, Stork turned to Monitran, the UK-based OEM of sensors.

Monitran made a site visit to see a Dairyfill machine in operation and, based on its observations, recommended the use of 16 mechanically mounted sensors per machine for data collection purposes. These are all stainless steel, single axis, low-profile, industrial sensors with integral cables and sealed to IP65. The mounting locations include the main bearing and hub, main drive motor, drivetrain (including block bearings and gearboxes), capper top and bottom bearing.

Mounting locations include the main bearing and hub, main drive motor and drivetrain

Stork’s Virtual Engineer team fitted the sensors to its selected filling machines and used HBM data acquisition units, which can cater for up to 16 analogue inputs, to convert the sensors’ analogue outputs to 24-bit resolution digital. Algorithms written in Microsoft C# stream the vibration readings, along with electrical current and temperature measurements, over the internet to be stored in an SQL server database. Figure 1 shows a system overview.

Vibration levels are sampled at a nominal 3kHz, so it was possible to build quickly a detailed picture of ‘normal’ behaviour for different modes of operation on a machine-by-machine basis, as no two rotary fillers have exactly the same vibration signature. Anomaly detection algorithms then look for signs of deviation from normal behaviour.

In the last year, Virtual Engineer has detected six conditions which, if left unchecked, could have led to catastrophic failures. These conditions included two instances of developing main bearing failures, water in a gearbox and a universal joint out of balance.

In addition, a developing gearbox failure was detected on a machine also being protected by a third party complex spectrum analysis warning system. However, the system was unaware of the worsening condition as the failing gear rotates at a low speed, circa 7rpm, and the danger with any low frequency noise is that it can be easily masked by the ‘noise threshold’.

Stork’s Virtual Engineer marks the first use of a remote, real-time, asset monitoring system within a CBPM strategy built primarily around vibration levels in a dairy application; and possibly within the food and drink industry. The knowledge gathered from the four machines has not only aided repair of those machines but it has also been made available to those dairies which are not currently connected to Virtual Engineer.

The KTP-funding has now ended but, in light of the impressive results so far, there are plans to take Virtual Engineer much further. Indeed, the underlying principles of applying anomaly detection algorithms to vibration level data, collected from well-positioned and fit-for-purpose sensors, has the potential to protect any machinery with rotating parts and improve the efficiency of scheduled maintenance.