RoboThespian is a life-sized humanoid robot designed for human interaction in a public place. Being fully interactive, multilingual and user-friendly, it offers a new and memorable way to communicate and entertain. 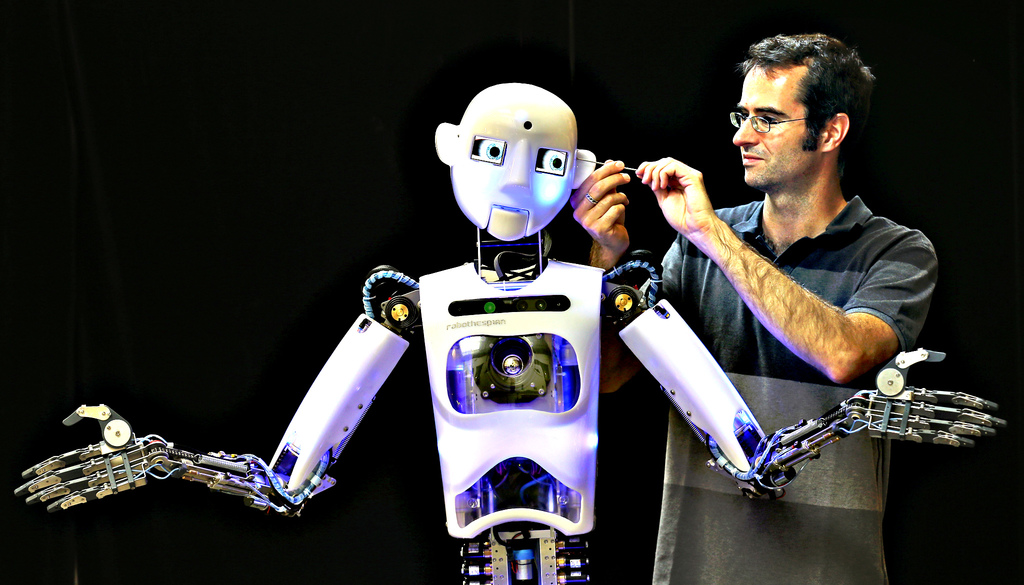 Initial design work focused on mechanical engineering and control systems development. However, it soon became obvious that this was too much of a one-way relationship – the audience wanted to interact. EA robots are robots with personality who are able to teach, entertain and interact.

In 2007, software development meant that RoboThespian could at last respond, and at the Association of Science-Technology Centers conference in Los Angeles USA was demonstrated the first interactive version of RoboThespian, who relentlessly performed a series of movie clips and started to reply to the audience.

At the component level

RoboThespian deploys motors and pneumatic muscles that affect two degrees of freedom simultaneously. These links feature in the upper and lower limbs. In the legs, the actuator linkage mimics the action of human muscle pair rectus femoris and biceps femoris. It maintains an angular relationship between knee pitch and hip pitch, creates a simple and effective way to keep the robots COM, (centre of mass) over the support during the stance phase, and maintains a straight line vector for the end effector as the leg extends or contracts. Hip pitch can still be independently controlled.

Series and parallel elastic elements are used to sense force and store energy, they also counter gravity loads which can drastically reduce motor power consumption and required maximum output power. Motors can be smaller and lighter and the duration of autonomy can increased. Traditional steel springs are heavy, and are used where necessity dictates, substituting pneumatic muscles where possible.

RoboThespian has over 26 axes, powered with a mixture of pneumatic and servo actuators. The pneumatic fluidic muscle actuators in use on RoboThespian are capable of generating high tensile forces with a stick-slip-free movement pattern, enabling both slow and fast movements to be executed with equal adroitness. The non-linear nature of the actuation curves provide a highly natural-looking motion. When combined with antagonistic muscle pairings and high-level control algorithms, a sophisticated biomimetic robotic system can be readily achieved.

The actuator system comprises a combination of air muscles and electric motors, with low-geared, fluid tuning for natural, expressive limb and body movements. It allows for a broader, faster, more precise and more natural-seeming range of movement than that possible with either actuator variety acting alone. Specialised muscle-mimicking material and custom valve design gives an unprecedented degree of control over the non-linear force-driven elements of the robotic system.

The position encoders used on the robots are based on the Austria Microsystems AS5145 Rotary Encoder. Visual and depth information is achieved via standard high-resolution RGB cameras in conjunction with IR sensors.

High-performance polymer bearings expert Igus has presented a prestigious Manus UK award to Engineered Arts, in recognition of innovative use of polymer bearing. RoboThespian is fitted with a total of 85 Iglidur bearings on all rotating shafts, which has enabled its movements and gestures to be more fluid and friction-free.

RoboThespian is a web connected device – in fact you can visit his/her control interface, just like any other website, (if you have the password!). You can see what RoboThespian sees, make him move and tell him what to say from any where in the world with a net connection – the ultimate tele-presence. This works in just about any web browser that has an Adobe Flash player plug-in. It also works on PCs running Linux or Windows, and on Macs and you can even control RoboThespian via a tablet.

Researchers and programmers can use Virtual Robot to design their own routines and store them on the cloud server, get a complete view of the robot’s content, sensors and actuators, and even write their own programs.

Now, the next step – quite literally – is to leap into the future with the next generation of humanoid robots, one that can walk, jump, and hop, just as well as a human.