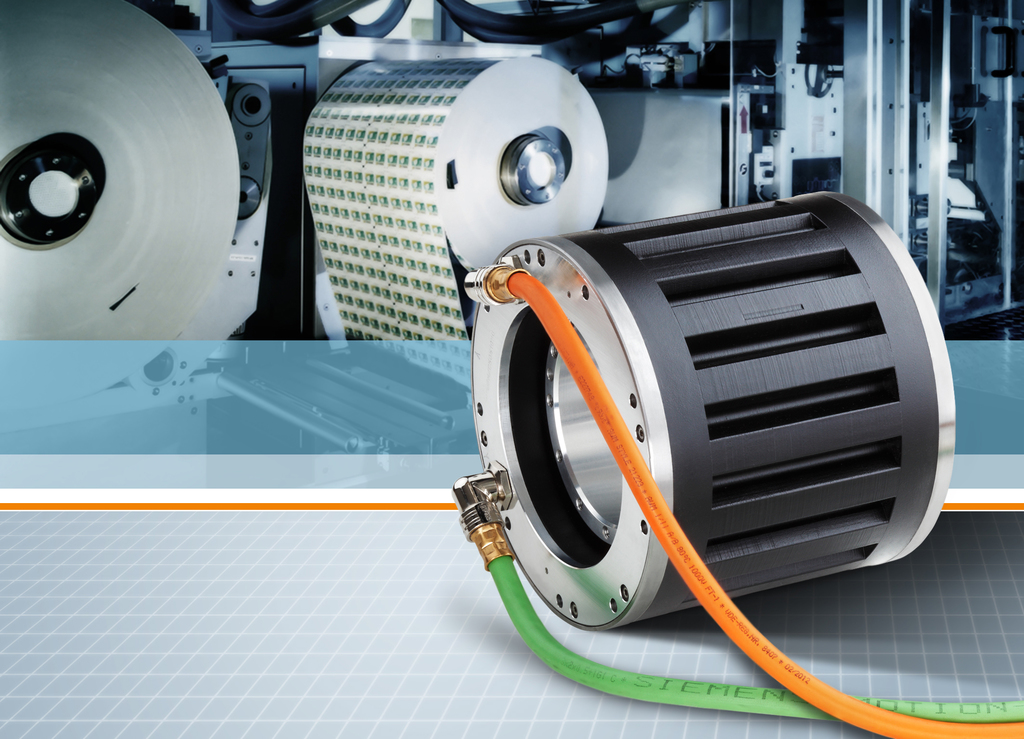 The self-ventilated built-in torque motors are especially suitable for applications in which relatively slow-running gearless driving is required with a large torque, for example, for driving rollers or swivel axes of measuring machines. Because the windings of the stator are encapsulated, the motors are very rugged. For additional air flow cooling, the stator is also fitted with cooling ribs on the surface of the frame. The heat produced in the stator winding is dissipated into the ambient air through these.

The new motors are available in five shaft lengths for each frame size and, like the water-cooled variants, they provide maximum torques of 34.4 to 339Nm.

All rotating electrical machines generate heat as a result of the electrical and mechanical losses inside the machine. Losses are high during starting or dynamic braking. Also, losses usually increase with increased loading. So motor power is often limited by the ability of the conductors in the windings to carry the current without overheating and melting.

The limits of passive air-cooled motors – those using finned stator cases – in terms of current capacity per square millimetre is around 5-8A/mm2. This may be improved by using fans or air ducts to channel air from the outside of the vehicle to the motor, thus keeping the cooling fins at a lower temperature. Finned motor cases lead to a large increase in diameter, although for low-cost static machinery, this is not a concern

Self-ventilated, rib-cooled motors have an additional, inner cooling air circuit. A fan is located at the non-drive end, which draws in the air from outside and blows it axially over the outer cooling ribs of the frame. Heat is exchanged with the inner cooling circuit at this location, which guarantees a uniform temperature distribution in the active motor and bearing areas.

In forced-ventilated motors, the fan impeller for the inner cooling circuit is mounted on the motor shaft and is unaffected by the rotating direction. Further, the outer cooling air flow is generated from a separately-driven fan that guarantees a constant cooling power in every operating state. This means that the motor can always be operated over its complete speed control range and in both directions of rotation.

Water-jacket-cooled motors have a double-walled frame jacket with a spiral cooling water duct and, in addition, an inner cooling air circuit. The cooling water inlet is at the drive end, the outlet is at the non-drive end. Intensive heat exchange takes place through the cooling water. An accepted level of current in the windings of such machines is in the region of 10-15A/sq.mm. Complexity is added because of the need to have a cooler in the system, and a pump. By conducting heat through thin-walled coolant vessels rather than via the steel/iron stator, the allowable current capacity of the conductors can be increased to around 20A/mm2.

To go further, it is necessary to consider directly cooling the conductors with an electrically non-conductive coolant. There are many suitable fluids for this, ranging from pure water (deionised water is a poor electrical conductor) to special-purpose electrical oils, which are designed for cooling electric motors and transformers, and are hence often known as 'transformer oils'. Such cooling schemes where coolant removes heat directly from the coils allow a current capacity of about 30A/mm2.