The new GOT2000 HMI series just launched by Mitsubishi Electric in the UK is available in three versions: the GT27 for high end applications that demand the highest levels of performance; the GT23 for cost-sensitive applications; and a software HMI version, the GT SoftGOT2000, realising all of the GOT2000 features on a PC or panel computer 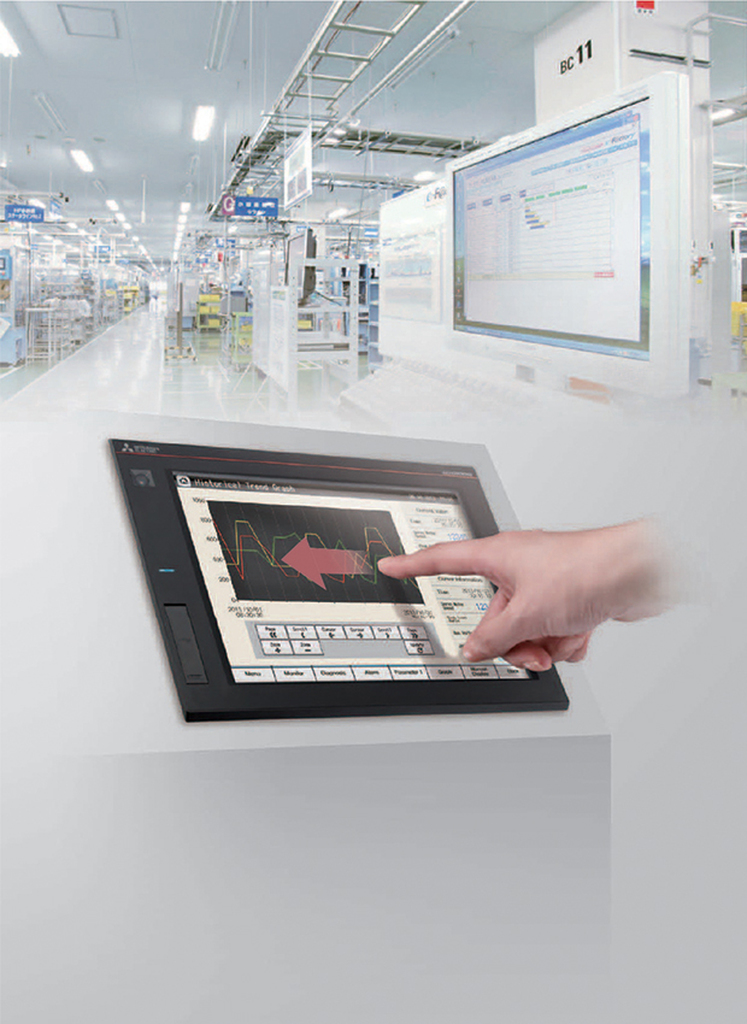 The GT27 series is characterised by an intuitive operating concept with multi-touch function and gesture control, said to be a first for industrial HMIs. And in direct response to requirements from the food industry, there are models with flush, clean, white front panels.

Monitoring speed and booting time in the GT2000 is twice as fast as the previous flagship GOT1000 model and memory is four times greater. The range of communication options has been expanded: along with Ethernet, are two serial interfaces (RS232 and RS22/485), an SD card slot and USB connections on the front or back.

Via Ethernet, users can operate the GOT2000 remotely from a PC (VNC Server)

Like their predecessors, the GOT2000 operating panels are equipped with the special FA transparency function, enabling PCs connected via the HMI to establish a direct link to Mitsi devices such as PLCs, frequency inverters, servo motors and robots. An optional WLAN interface enables the HMI to be accessed remotely via PCs and tablets. Via Ethernet, users can operate the GOT2000 remotely from a PC (VNC Server). And an MES interface option enables the GOT2000 to transmit data collected from PLCs and other automation devices directly to higher level system databases, eliminating the need for gateway PCs or complex programming.

GOT2000 HMIs support a wide range of image formats – including PNG – for clear screens with well-defined objects that are crisp even when enlarged or reduced. The HMI also supports a library of outline fonts in different sizes.

GOT2000 series HMIs feature tablet-like usability with the introduction of multitouch and gestures, even when wearing gloves. Screen gestures enable users to easily enlarge screens for better visualisation and easy operation of small switches. After enlarging, users can scroll across the display.

Object gestures allow specific objects to be enlarged, scrolled or flicked, including historical data lists, alarm displays, trend graphs and documents. GOT2000 screens also allow two-point pressing, for simultaneous operation of two switches on important operations – such as ”interlock release” and ”start”. This eliminates the need for external panel hardware.

Capacitive touch is a touchscreen technology that uses two perpendicular layers of conductive material to form a grid. When a current is applied, it forms a uniform electrostatic field. The touch of a finger or other conductive object will distort the field, allowing the system to accurately track movement across the screen at multiple points. This technology is used commonly for smartphones and tablets, but to an increasing extent also for innovative user interfaces in industrial applications.

However, it is a difficult technology to use in industrial environments, for example when wearing gloves. For this reason, Mitsubishi has opted for an analogue resistive technology in these new HMIs. Resistive touchscreens, which consist of transparent electrodes without any patterning facing each other, typically have high resolution, providing accurate touch control, though the resistive screen has poorer responsiveness to light touches.