Engineers at the University of California San Diego have developed a new method that doesn’t require any special equipment and works in just minutes to create soft, flexible, 3D-printed robots. 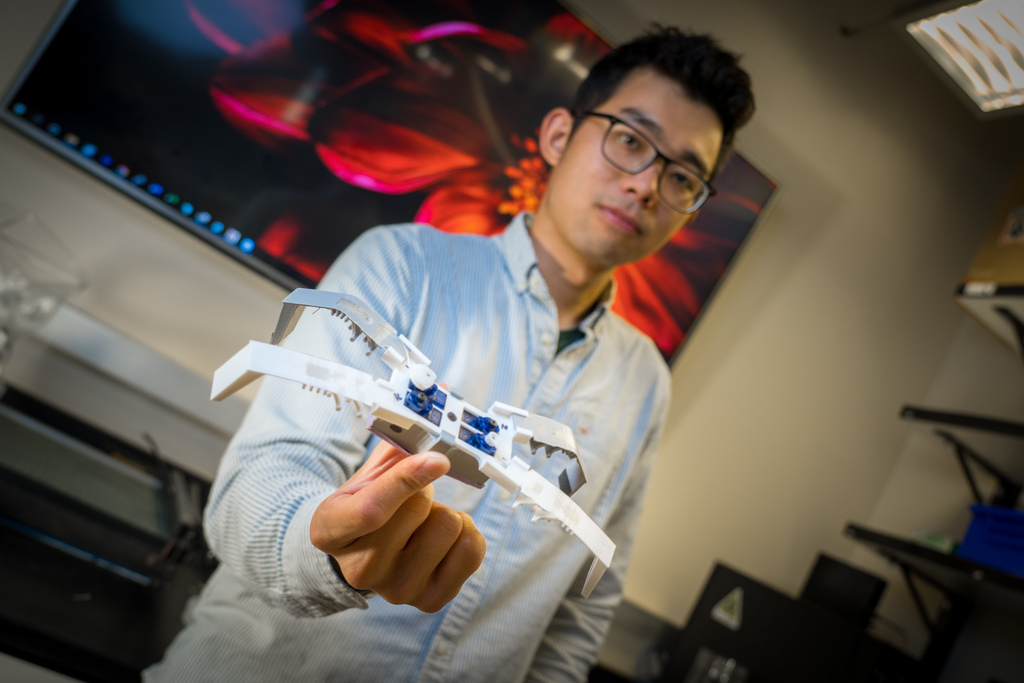 Ph.D. student James Jiang, the paper’s first author, shows one of the flexoskeletons developed with the researchers’ 3D printing method

The innovation comes from rethinking the way soft robots are built: instead of figuring out how to add soft materials to a rigid robot body, the UC San Diego researchers started with a soft body and added rigid features to key components. The structures were inspired by insect exoskeletons, which have both soft and rigid parts—the researchers called their creations 'flexoskeletons'.

“We hope that these flexoskeletons will lead to the creation of a new class of soft, bioinspired robots,” said Nick Gravish, a mechanical engineering professor at the Jacobs School of Engineering at UC San Diego and the paper’s senior author. “We want to make soft robots easier to build for researchers all over the world.”

The new method makes it possible to build large groups of flexoskeleton robots with little manual assembly as well as assemble a library of Lego-like components so that robot parts can be easily swapped.

The flexoskeletons are made from 3D printing a rigid material on a thin sheet that acts as a flexible base. They are printed with various features that increase rigidity in specific areas—again inspired by insect exoskeletons, which combine softness and rigidity for movement and support.

Researchers detail their work in the 7th April issue of the journal Soft Robotics.

One flexoskeleton component takes 10 minutes to print and costs less than $1. Flexoskeleton printing can be done on most low-cost commercially available printers. Printing and assembling a whole robot takes under 2 hours.

Researchers surveyed a range of materials until they found the right flexible surface to print the flexoskeletons on—that turned out to be a sheet of polycarbonate. Careful observation of insect behavior led them to add features to increase rigidity.

The ultimate goal is to create an assembly line that prints whole flexoskeleton robots without any need for hand assembly. A swarm of these small robots could do as much work as one massive robot on its own – or more.