Once dominated by forklift trucks and less than ideal working conditions, production facilities in the automotive sector are benefiting from increased digitalisation, use of collaborative robotics, and autonomous mobile robots. Charlotte Stonestreet looks at some examples 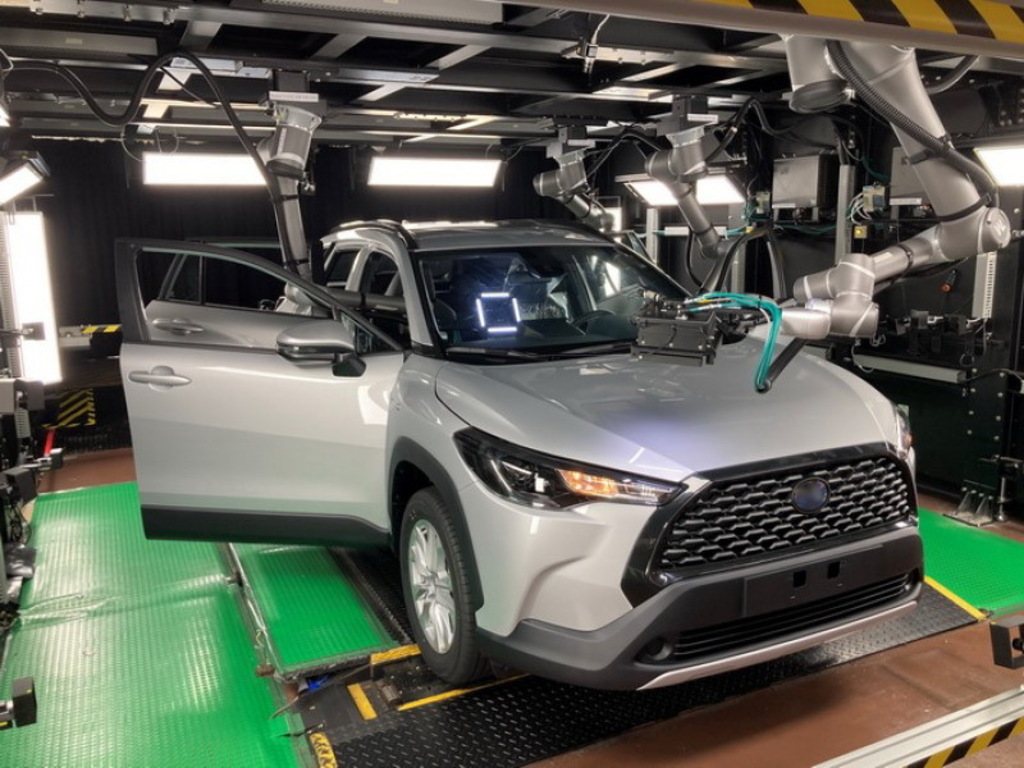 There is no doubt that the global pandemic has had a marked effect on the automotive sector. As governments worldwide implemented widespread lockdowns, many cars became all-but redundant on the driveway, and vehicle production was halted. According to the Society of Motor Manufacturers and Traders (SMMT), how quickly the automotive sector recovers from the shock of the pandemic will be decisive for Britain’s overall recovery and future prosperity, global influence and reputation. As well as potentially creating further skilled jobs, the sector can lead the world in technological development and drive the transition to a zero-carbon economy.

Beyond the pandemic, the SMMT also points to more familiar challenges which remain ongoing; for example trade tensions, environmental pressures, technology shifts and, for the UK and its closest trading partners in the EU, Brexit. Indeed the global nature of the automotive supply chain, as well as its reliance on technology, has been thrown into sharp focus with the recent disruption to production at BMW’s Mini facility in Oxford because of a shortage of semiconductors. Jaguar Land Rover also suspended production at its Castle Bromwich and Halewood factories for the same reason.

The automotive sector has always been at the front of the queue when it comes to implementing automation, so it’s no surprise that collaborative robots are becoming more repellent through the sector supply chain. Indeed, the latest report from Kenneth Research predicts that the shipment and sales revenue brought by collaborative robots in the automotive industry will increase by 43% every year by 2022.

Reflecting this trend, a well-known Japanese car manufacturer has implemented a solution from Taiwan-based collaborative robot manufacturer, Techman Robot to process the final quality check of detailed assembly inspections. Techman Robot helped the customer to install the next generation smart inspection system, utilising a customised stand including four Techman collaborative robots. In addition to the built-in smart vision, 36 external front and rear cameras were also installed. Moreover, each collaborative robot is equipped with three types of lenses, including short, middle and long.

This is the only one of the car manufacturer’s global production lines using the automated optical inspection (AOI) system and AI smart inspection solution. The ceiling-mounted arm can move inside/outside the car to inspect items including wipers, horn, seats, seat belts, steering wheel, dashboard, centre console, remote control, fog lamps, and stickers, etc. All inspection data can be photographed and saved to enable quality traceability as well as guarantee the outgoing quality.

TMflow, Techman Robot’s innovative and user-friendly interface, allows the trained staff to quickly program based on different car types or demands, negating the need for the system integrator to come to the factory, resulting in significant reductions in time, manpower and costs.

Another automotive supply chain plant to be already taking advantage of a collaborative model is the  FPT Industrial Driveline plant in Turin, which is dedicated to the production of transmissions and axles for heavy equipment. Here, in the department dedicated to assembling spindles for heavy equipment axles, AURA (Advanced Use Robotic Arm), a robot designed and built by Comau, operates.

The application is part of the HuManS (Human-centered Manufacturing System) project, launched in the Piedmont Region, which is dedicated to the Intelligent Factory Platform and counts which FPT Industrial, Comau and another 17 specialist companies as participants. The project places humans at the centre of the production system, surrounded by machinery that helps and shares the space with them in complete safety.

AURA retrieves a part from the supply cart in complete autonomy and delicately hands it to the operator.

Almost three meters high and weighing about three tons, AURA is a collaborative industrial robot capable of working alongside humans, without barriers and in the same work station, to help them and perform the most tiring and repetitive tasks. Where necessary, it can be manually guided by the human operator. Specifically, AURA retrieves a part from the supply cart in complete autonomy and delicately hands it to the operator. At this point, the human operator takes control of the operations, guiding the robot using a specific handle so that the mechanical arm takes the part to the workbench, where it is coupled with a lever. 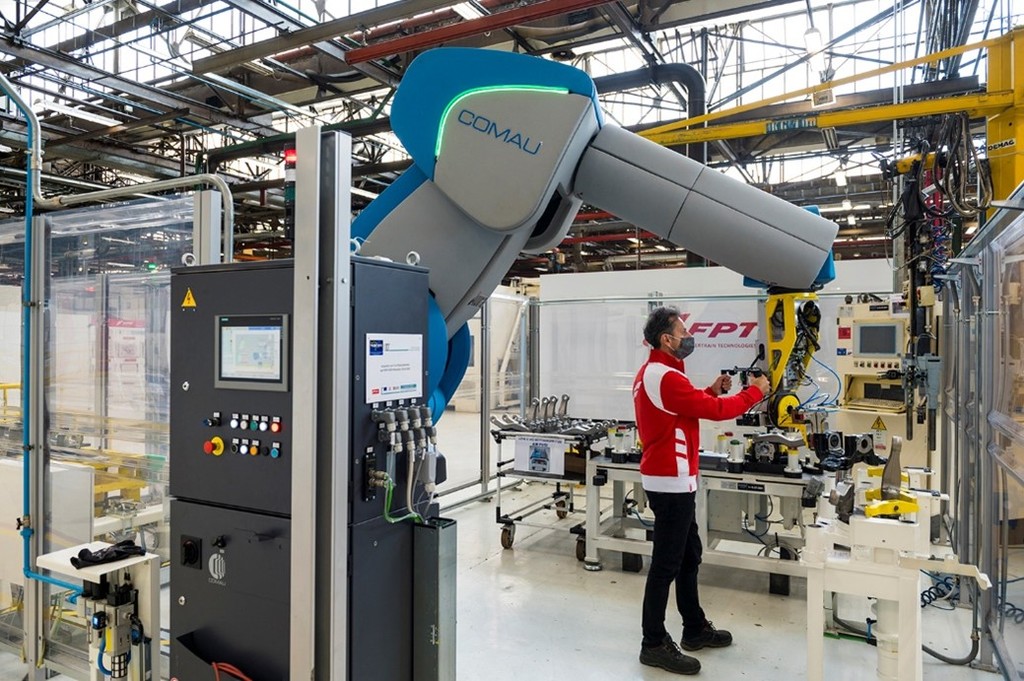 Reported to be the only collaborative machine on the market capable of lifting up to 170kg, the robot performs the heavy work methodically and effortlessly, while the delicate assembly stage is controlled by a human, thereby using human skills to adapt to operational situations and assembly strategies that vary from model to model.

In order to perceive a presence, whether it be other machinery or a real person, in the space where it operates and consequently moderate its behaviour, AURA uses a 'sensitive skin' which allows it to decide whether to reduce its speed or stop entirely; a 'view' in the form of a 3D camera that the robot uses to scan the piece being retrieved in order to perceive its position; and 'touch' expressed through a gripper, capable of lifting the component with a firm, but delicate grip.

To work without any barriers alongside a human on the FPT Industrial driveline assembly line, AURA also has a 'sixth sense', an advanced and complex laser scanning system that investigates and monitors the workspace when the arm is in operation.

The Audi e-tron GT is the brand’s first fully electric car to be built in Germany. The Gran Turismo will start rolling off the production line at Audi Böllinger Höfe at the Neckarsulm site. The small-series production facility has been expanded, upgraded, and converted for its new role. The skilled craftsmanship from the previous facility has been retained and is supplemented by digital processes and smart technologies.

During the expansion, production planners made use of new virtual methods. The tests of the work procedures on the assembly line and the logistic processes were conducted in the virtual domain for the first time, with container planning also performed with the help of VR technology. Production of the e-tron GT was designed without physical prototypes – a first at Audi. 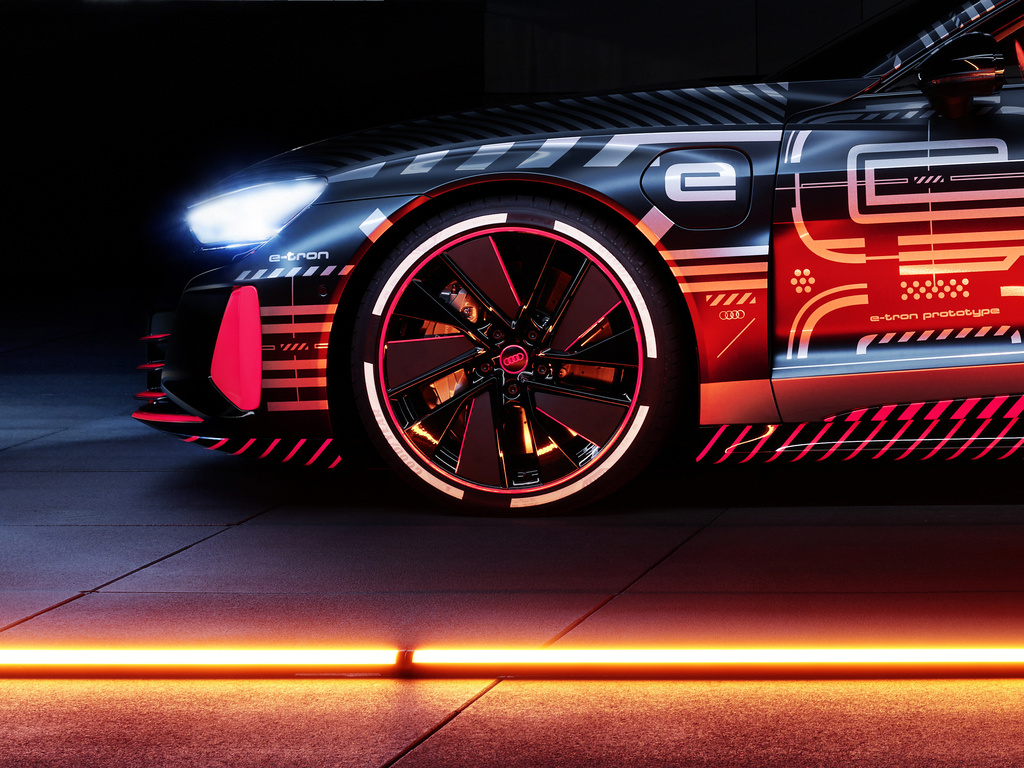 Large areas of the body of the all-electric Gran Turismo are constructed from ultra-high-strength steel and aluminium. To produce this material mix in the planned quantities, a body shop was set up that combines the skills of the employees with the potential of automated production technology. Consisting of an innovative body assembly line along which each body passes twice, it is constructed around a 'two-way framer, in which ten robots are used to attach the inner and outer side panels. It combines all manufacturing steps involved in joining the sides in a single system – making production of the Audi e-tron GT possible within the existing floorspace.

The inline measuring procedure for the bodies is also new. It guarantees even greater accuracy and can respond very quickly to minute deviations. At the end of the body assembly experienced workers fit the add-on parts and check the finish of the completed body.

The expanded assembly line includes 36 instead of the previous 16 cycles. The e-tron GT shares it with the R8 – this integration of two technically completely different cars is unique in the Volkswagen Group. Both models are moved using the same driverless transport vehicles and an electrically powered monorail system. At one station of the line, humans and robots work side by side. A 3D printer is also on hand to produce customised assembly aids at the employees’ request.

While electric cars are gaining in popularity, one issue that has come to the fore is what to do with the batteries once they are no longer powerful enough to run a car. Nissan uses in excess of 4000 automated guided vehicles at its production plants globally, so when the company was exploring new ways to reuse its Nissan LEAF batteries, the connection was made.

LEAF is the mass-market electric vehicle that has spearheaded Nissan's journey towards zero emissions since 2010. The first-generation LEAF was fitted with a 24-kilowatt-hour battery pack. These lithium-ion packs were made by combining 48 modules. About eight years ago, Nissan's engineers found a way to take three of these modules, repackage them and fit them inside an AGV. Last year, they took this idea to a new level by using repurposed battery modules, instead of new ones, to power AGVs. 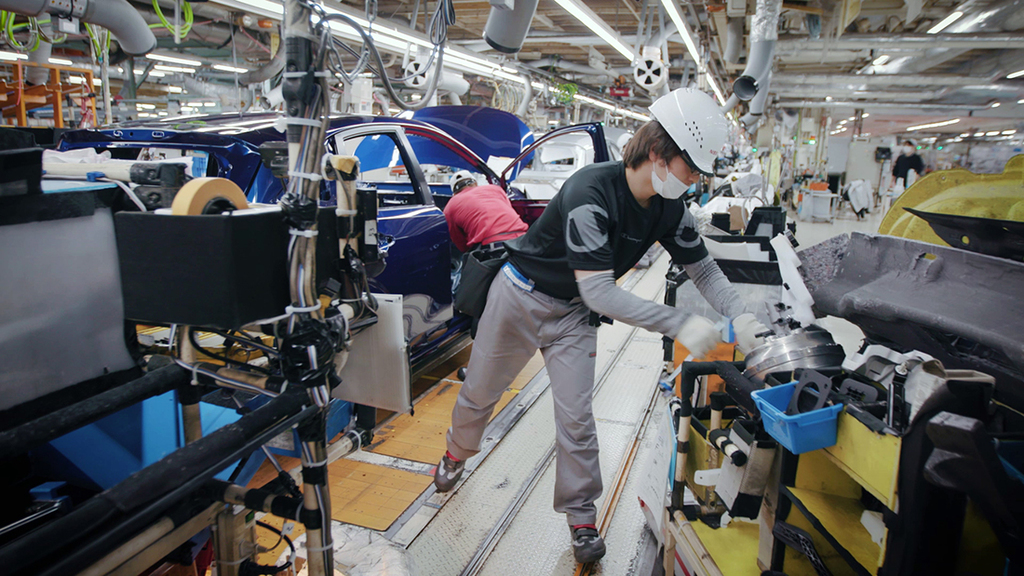 Nissan, together with 4R Energy, has been a pioneer in giving batteries from electric vehicles a new life in powering its AGVs – because they were not powerful enough anymore to run a car, but perfect for a machine scooting around the factory. This makes electrification of mobility an even more sustainable proposition.

AGVs with lithium-ion batteries, new or repurposed, charge faster. Plus, workers no longer need to take out the batteries to plug them in. The AGVs simply stop momentarily at the charging station along their route and incrementally top up at each passing. This automation saves a great deal of time.

The FPT Industrial plant in Bourbon-Lancy, in the Saône-et-Loire region, assembles 35,000 high-powered gas and diesel engines per year, destined for agricultural machinery, buses and trucks. These parts are large and heavy, and with the specific tools needed for their assembly, the pallets were taking up too much space in the assembly line. 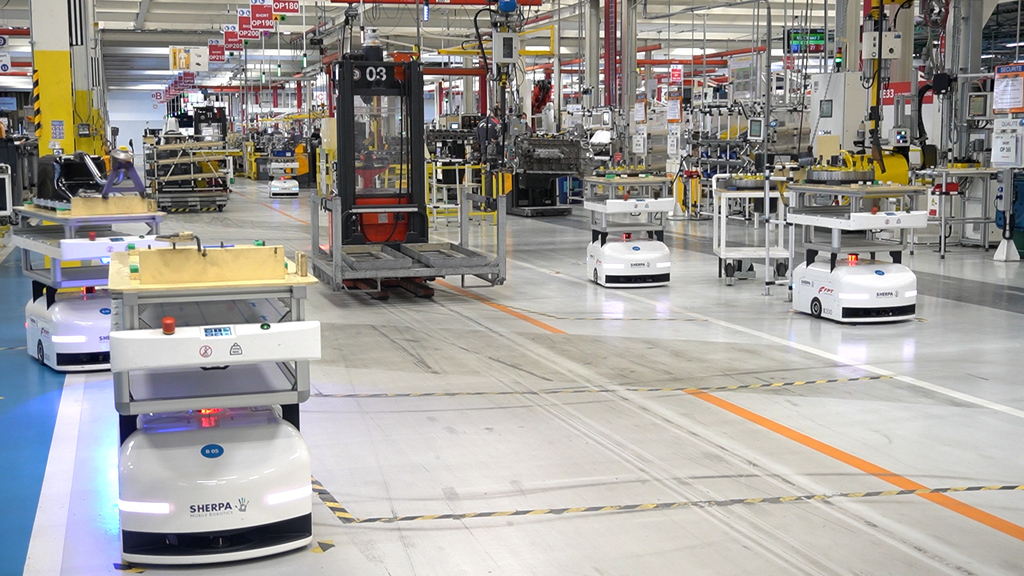 In order to improve the logistics flow and the working conditions of operators, FPT called on Sherpa Mobile Robotics and its autonomous mobile robots (AMRs). Unlike AGVs, AMRs do not rely on dedicated paths; they are programmable to be able to adapt to their environment with its constraints and constant evolution. SMR proposed a complete reorganization of the assembly line with the support of a fleet of six robots managed by its Fleet Management System software.

Unlike AGVs, AMRs do not rely on dedicated paths

The assembly was reorganised into two parallel lines separated by a central aisle. One line is dedicated to the preparation of the sub-assemblies and the other to the assembly of the 150 engines to be produced each day, working in two shifts.

The six robots are deployed in twos, two each for the three assembly stations for motor supports, motor flywheels and basins. At the robot’s departure point, one person prepares the parts. When the robot arrives at the assembly line, another person is there to receive the parts. 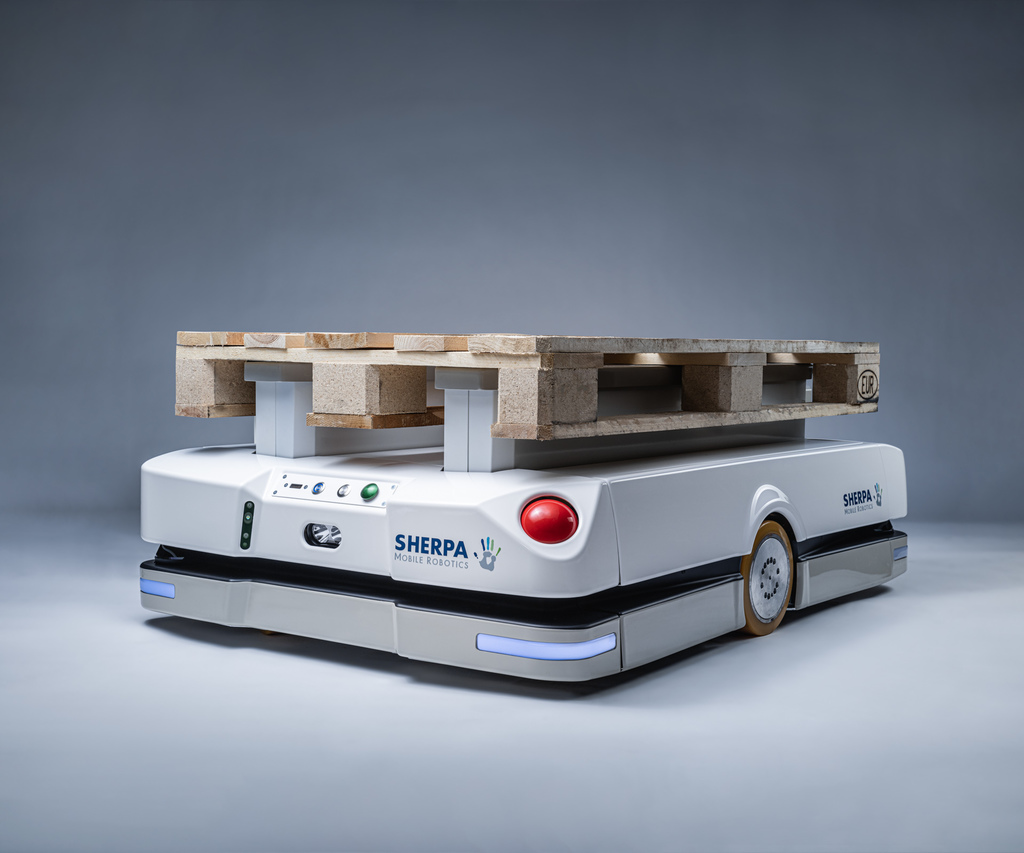 The robots have three programmed missions for each of the assembly stations. Each robot brings a prepared and assembled sub-assembly from the preparation area to the assembly area and then returns. Central to this organisation is line side management that is both automated and mobile. The operators stay in their work area. The Sherpa robots come to them, carrying the parts and specific tools. The parts are prepared elsewhere, in the preparation line, where they are unpacked and laid out ready for assembly, along with the necessary tools.