What can we achieve with Industry 4.0, and what is standing in our way? Cliff Ortmeyer, Global Head of Technical Marketing at Farnell garners the opinions of some leading experts 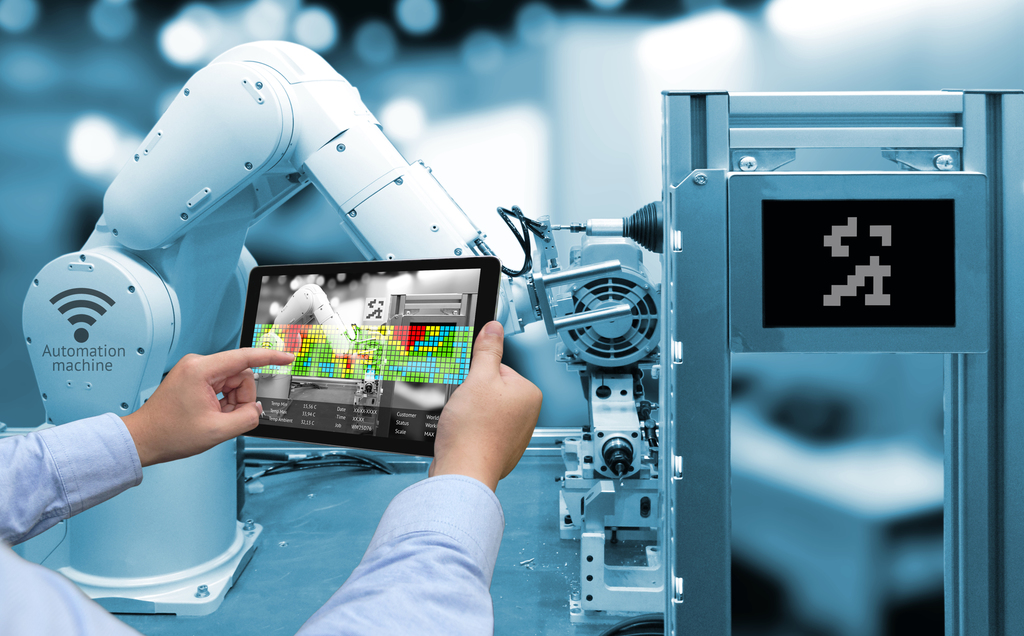 Industry 4.0 promises to reshape the factory by using digital technology. The key difference between Industry 3.0 technologies, which saw automated robots enter the industry, and Industry 4.0 is the introduction of interoperability and connectivity of factory technologies. As the technology evolves and adoption continues, businesses will be able to achieve increased efficiency and productivity, saving time and money while decreasing energy consumption to better support the global economy. Systems will become more flexible, dynamically adjusting to the order flow from customers.

businesses will be able to achieve increased efficiency and productivity

Despite the promised benefits, the shift to Industry 4.0 can seem like a big step and one that might be difficult to sell to senior management. Steve Sands, Manager of Product Management and Marketing at Festo, says early attempts to sell the concept to manufacturers did not help. “You can definitely still see and feel that resistance and scepticism. Initially, Industry 4.0 was seen as marketing jargon that was coming out of Germany and it seemed to have little to do with anybody else. Then it got picked up outside of Germany. However, I think it was misused by some companies who just tried to put a sticker on the side of the components stating that it was Industry 4.0,” he explains.

Rather than treating Industry 4.0 as a way of transforming the entire operation, a more feasible option is to focus on smaller, near-term successes says Martin Walder, Vice President of Industrial Automation at Schneider Electric. “I would recommend tackling digital transformation to Industry 4.0 in bite-sized stages, starting in a very small way to get people familiar and then accelerating as fast as you feel comfortable,” he says. The company’s EcoStruxure platform demonstrates the benefits, by reducing the cost of facility management maintenance by 30 percent with operational and product part savings, and solar-generated energy by 10 percent.

Sands points to predictive maintenance as an important target for Industry 4.0 deployments as it often provides a clear return on investment. A major cost to manufacturers is equipment downtime caused by broken machinery as well as maintenance organised to a fixed schedule, which will need to be conservative to minimise failures in service. By arming the machine tools with sensors and using a combination of local and cloud-based software to monitor conditions, it is possible to detect the wear conditions that point to a potential failure in the short term. Factory operators can in turn react to those circumstances instead of fitting maintenance operations into a fixed calendar.

Jeff Barnes, Distribution Corporate Account Manager for Molex’s Industrial Products in Europe explains this well, noting that with predictive maintenance “a machine builder can predict an issue and only send engineers when a repair is needed”.

Importantly, failure prediction makes it possible to schedule repairs at times that are best for productivity instead of reacting to faults. Those all too often come during times of peak stress on a production line. The operator can book the maintenance for times when they know the tool or robot in question will not be heavily used and other machines can be reprogrammed to take over the operations. “We can offer Industry 4.0 to machine manufacturers primarily in these areas and provide them with insight and greater productivity. With a better understanding of these machines comes far better opportunities,” Sands stresses.

Metrics such as energy efficiency provide a perspective on costs that manufacturers may not have used in the past and one that drives the longer-term transformation towards full Industry 4.0 implementation. “Automating a factory comes with significant costs, and investments require looking beyond initial capital outlay or seeking the lowest possible cost. This merits both a cost-benefit analysis and a long-term vision,” Barnes explains. Although it may be possible to convince management of a return on investment, it is just as important to ensure that all staff buy into the idea. Manufacturers are often conservative for good reason. They have learned techniques that work time and again. Changing those practices represent risk. The teams responsible for keeping the factory running smoothly are naturally reticent to adopt practices about which they have little experience.

However, as Walder explains: “Industry 4.0 is not just about the people that are implementing it. It’s also about the people that are operating and working with it. If you don’t get people tuned in and onboard, then they’ll probably fight against it and that can be a challenge.  If operators are not working with you, they can fight changes and actually turn successes into failures. We need to speak the operator’s language.”

A further issue is that of the skills needed to implement Industry 4.0 across a wider range of applications. “In smaller companies, they sometimes don’t have an engineer who is an expert in integrating connectivity or using a specific automation protocol, and so they need to educate their engineers to understand the integrated connectivity to take the company in the right direction,” says Sara Ghaemi, Key Account Management Team Leader for Automotive and Industrial Systems Europe.

In contrast to the earlier industrial revolutions, Industry 4.0 calls for integration between parts of an organisation that have previously not worked closely together. Information Technology (IT) staff have focused on business applications while those in Operations Technology (OT) handle shop floor computer and robot resources. However, due to the many Industry 4.0 applications, manufacturers will begin to see a direct integration between order flow and how the factory floor is configured. This requires both IT and OT increasingly having to talk the same language.

“When I look at most of our customers, they have grown up with IT people working on office IT systems and controls people working on operational plant systems. In the future, the companies that are going to thrive are those that actually let the operational parts of the business start driving the IT agenda more, enabling IT people and OT people to really collaborate together. They will need to have a combined strategy if they’re going to move forward with Industry 4.0 technology,” Walder explains.

Sands agrees: “You can't implement an Industry 4.0 solution without the IT department being totally involved in the project. So, you must have real cross-functional teams, working within the clients. We need people with combined data science and IT security skills and there’s still a lot of traditional engineering courses at universities that aren’t equipping people for these new technologies.”

On other hand, Ghaemi expects schools and universities will rise to the challenge: “Education will play a factor to shift things in the right direction.”

Suppliers have a role to play in assisting users to deploy the technologies. Thomas Dale, Engineering Manager at Omega, points out that “ease of use and ease of installation will drive adoption and acceptance”.

As the right skills permeate, Industry 4.0 could see new roles emerging. “In bigger companies, it would be good to have an Industry 4.0 Manager who connects all the IoT activities within a company, such as connectivity data exchange, to take it in the right direction. There would be a nominated person to act as an Industry 4.0 champion for the company,” Ghaemi says.

In addition to the skills shortage, there are growing concerns about unsecure networks during the implementation Industry 4.0 technology. Sands believes if this is not addressed, the security issue will be a potential throttle on the deployment rate of Industry 4.0 technology. “What holds some people and companies back is fear about cybersecurity and how they can be sure they have a secure interface when they are using the cloud. Many companies have concerns about any data in the cloud being accessed outside of the company. They've got the responsibility of protecting their company.” However, a number of suppliers are working hard on security. Ghaemi points out that Panasonic is already “working with partners to integrate the highest security standards into its products”.

As issues are addressed, the benefits and future opportunities granted by the technologies that underpin Industry 4.0 will provide companies with the ability to futureproof their businesses and bring benefit on a global scale. To get there, companies will need cooperation as much as technology. Working with the right partners will ensure manufacturers get the best start with Industry 4.0.