Paving the way for productivity

Concrete evidence has emerged of export success for Stoke-on-Trent based engineering firm Morris Brothers, following the delivery of a custom-built slab moulding machine to an overseas customer 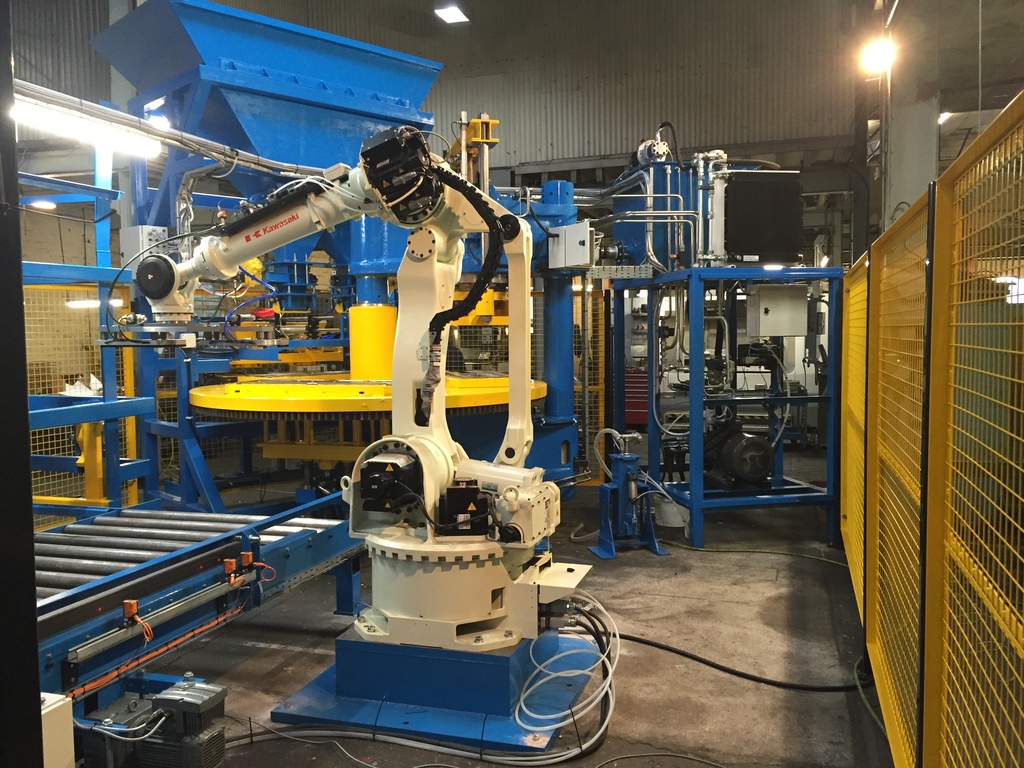 Morris Brothers is one of the UK’s oldest established manufacturers of concrete moulding machines, and for this latest export success, a Kawasaki robot proved invaluable in helping them secure the contract

A customer in Turkey needed a 3-station press capable of manufacturing large concrete slabs, and lots of them. So Morris Brothers works manager  Mick Humphries, assembled a team and got to work on formulating a detailed design based around the initial drawings that accompanied the enquiry. A key part of the moulding process in this application, and one which had the greatest potential to retard production rates, was the demoulding process where completed slabs of formed concrete are removed from the press and placed onto an adjacent pallet. With a typical individual slab weight (dependent on the design being produced) of between 9.5kg and 12.5 kg, and with up to 4,500 slabs in need of demoulding and placing onto pallets in each 9 hour shift, it became clear to Mick Humphries and his team that a call to a robot company was a priority.

"We have, over the years, worked with many robot suppliers," says Mick, "But some time ago we settled on Kawasaki as our preferred provider. They have earned their place in becoming our first port of call for all robot-related applications now. In addition to providing good quality equipment, their attitude, engineering skills and confidence to let us do as much – or as little - of the design and integration as we want to ourselves has been of significant assistance to us."

In this application, the demoulding operation required each slab to be picked up using vacuum holders in the horizontal plane. The slabs are lifted and then rotated through 90° into the vertical as the robot arm moves across to the adjacent stacking pallet, where they are placed vertically into storage and transportation racks.

Kawasaki Robotics’ Ian Hensman and Alan Williams oversaw the Morris Brothers project, and mindful of the tight timescales described for the project, immediately asked their colleague Harry Nakis, Kawasaki Robotics’ experienced application engineer, to get cracking and create an active simulation based on the known facts at that point. The Kawasaki Robotics team had agreed that the company’s ZX-165U robot was the most appropriate choice in this case: a heavy-duty machine which offered the speed and precision required, and which was easily capable of lifting the weights on the specification sheet. Kawasaki’s ZX-165U robot is a 6 axis unit, with a reach of 2.651 metres. It features a rotating wrist which, even when fully laden, can rotate at 260°/sec whilst delivering guaranteed repeatable accuracy (at maximum reach) of +/-0.3mm.

Using this particular model of robot also provided the customer with another advantage, one which they hadn’t asked for but which was nevertheless warmly welcomed: inbuilt expansion potential, or future-proofing. Because the robot would be working well within its design specification, the customer could also use the robot, should it be required at any point in the future, for even heavier loads, or on different tasks, and at increased speeds with minimal reprogramming.

Ian Hensman observes: "When we first spoke with Morris Brothers about this project their team had already honed down the detail design of the press and identified exactly what they wanted a robot to do as part of this 3-station machine. Being able to agree the precise operating parameters with Morris so early in the project meant that we were able to provide them with a computer generated simulation very quickly from our CAE facility in Warrington. As a result, all parties were able to confirm in record time that the proposed ZX-165U robot would indeed be ideal for the requirements set out in the specification."

Morris Brothers new concrete moulding machine, complete with Kawasaki Robot, was delivered to a delighted customer well inside the agreed delivery time and is now producing thousands of concrete slabs a week at the plant in Turkey. Mick Humphries concludes “Choosing to work with Kawasaki Robotics as part of our team on this project helped my colleagues and I take it from an initial enquiry to a fully commissioned installation more than 2000 miles away in just 26 weeks."