Variable speed drives (VSDs) and soft starters can both be used to protect expensive equipment and extend the life of the motor and coupling devices. Andy Pye reviews information supplied by Fábio Gonçalez, European Automation manager at WEG and James Archer of Aucom 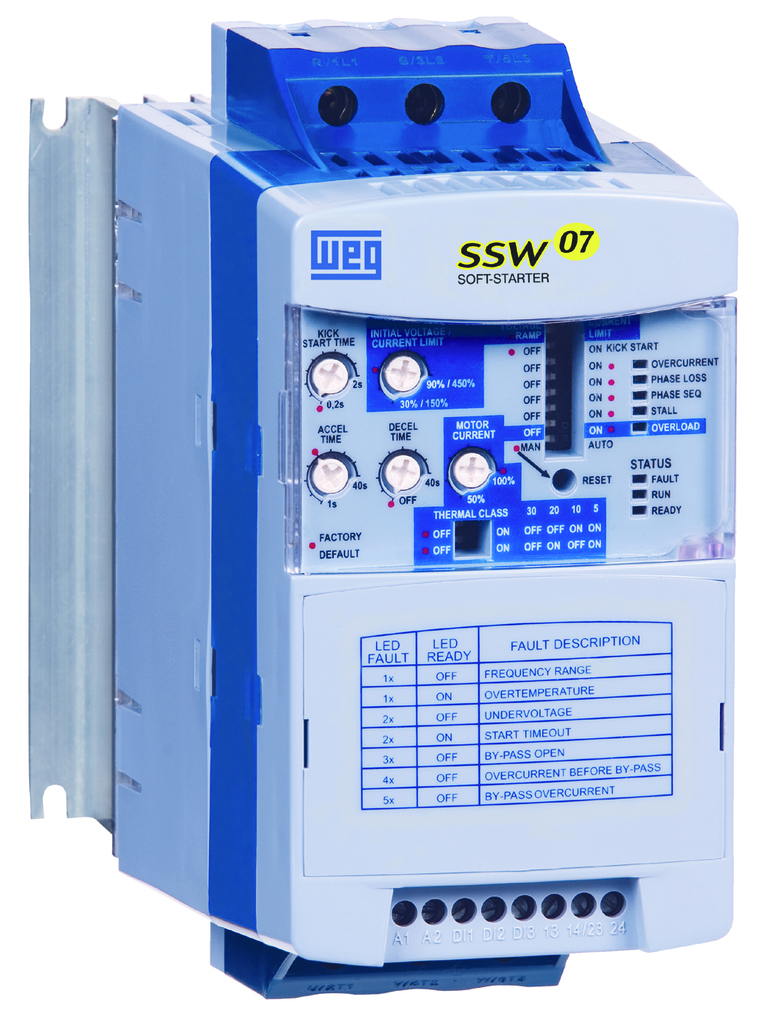 Choosing between VSDs and soft starters will depend on a number of factors, including the type of application, mechanical system requirements and costs - both for initial installation and over the lifecycle of the system.

When working at or near full load, the typical three‐phase induction motor is relatively efficient, achieving efficiencies of 80% to 95%. However, efficiency falls dramatically when the load falls to less than 50% of rated output. Very few motors actually experience consistent fully rated operation: most operate at much lower loads either due to over‐sizing (a very frequent situation), or natural load variations.

Soft starters are generally smaller and less expensive than VSDs, more cost effective whenever constant acceleration and torque control is not necessary, in applications that only require current control during startup. Additionally, they are often preferable in applications where space is a concern, as they are typically smaller than comparable VSDs.

Where varying the speed is not required, an inverter drive is effectively an expensive soft starter. Inverter drives also generate potentially disruptive harmonics which require suppression.

When accelerating an AC motor to full speed using a full voltage connection, a large inrush current may be required. As the torque of AC motors is generally uncontrolled, the result could potentially damage the motor and its connected equipment. By using semiconductor devices to temporarily reduce the motor terminal voltage, reduced voltage soft starters limit the initial inrush of current and reduce the mechanical shock associated with motor startup.

Soft starters are a great fit for conveyors, belt-driven systems, gears and couplings - where gradually controlled starting is needed to avoid torque spikes and tension in the mechanical system associated with normal equipment startup. They are also ideal for avoiding pressure surges or ‘hammering’ in piping systems when fluid changes speed too rapidly.

Smarter soft starters are becoming important in an Industry 4.0 environment. They can integrate easily and intelligently with industrial systems, and move from being a smart and efficient way to start and control a motor, to a method for controlling a whole system. By connecting directly to other devices in a system, such as pressure, flow, and depth sensors in a pumping application, a starter can make a real difference by becoming one central point of intelligent control and communications.

In contrast, VSDs can be more expensive initially but can contribute to dramatic energy savings in the long term. Typical energy savings are possible of between typically 40% and 60%. However, inverter drives will themselves consume 5 to 8% of the power consumption of the motor being controlled.

The need for speed control is an important reason to choose a VSD, because it ensures consistent acceleration time throughout the entire operating range of the motor, not just during startup. A VSD converts constant frequency and voltage input power to adjustable frequency and voltage source to control the speed of the motor. As such, it operates throughout the run cycle and can be used wherever complete speed control is required and when saving energy is the ultimate goal.
Typical applications such as elevators and escalators in addition to driving equipment such as pumps, conveyors and fans. VSDs also play a key role in maintaining the speed of manufacturing and industrial equipment such as mixers, grinders and crushers.

In fan and pumping, power is proportional to the cube of the shaft speed. Therefore an inverter drive will produce considerable energy savings over virtually all other methods of control through varying the speed of the motor in response to changes in load.